On-farm innovations make this Ontario dairy farm the cream of the crop. 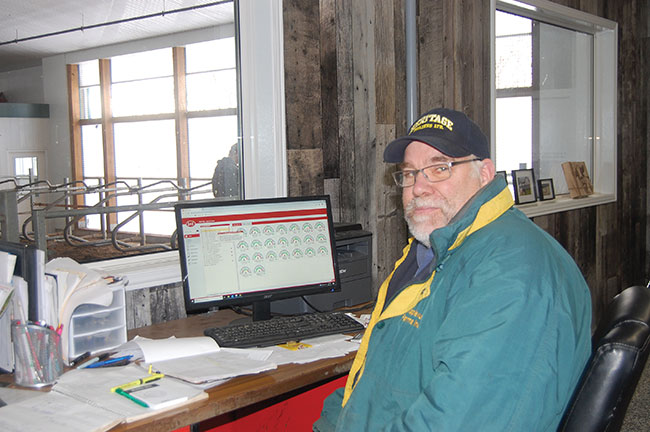 Dave Johnston sits at his computer to monitor his herd.Photo by Alex Barnard.

Balancing innovation with tradition can be a delicate dance. Breaking from the methods used by those who came before can be difficult – especially on family legacy farms – and newness doesn’t always represent an improvement. But finding a mix that works is a task for each farm, and it’s one that the Johnston families of Maplevue Farms have grabbed by the horns.

Maplevue Farms is located outside of Listowel, ON, in Perth County, the heart of Ontario’s dairy country. The current farm owners, brothers Dave and Doug, are the fifth generation of Johnstons to operate the farm.

In August, Maplevue Farms will be only the second Canadian location to host the North American Manure Expo. The Ontario Ministry of Agriculture, Food and Rural Affairs (OMAFRA) asked the Johnstons to host this year’s Manure Expo, which will see hundreds of custom applicators, producers and other attendees come to southern Ontario to check out the latest in manure technology, equipment and education. After attending the 2019 Manure Expo in Indiana, Doug thought they could bring something different to the event.

“We’re doing some things that OMAFRA likes to promote,” Doug says. The farm has used many “best practices” for years, including cover-cropping, composted manure cow bedding, crop rotations and minimum-till. Combined with more recent innovations, like manure collectors and robotic cow milkers, these practices have made Maplevue a farm to emulate.

Maplevue Farms currently has 200 cows on the farm, with 65 being milked regularly. While the brothers have acquired the quota to milk 100 cows and built the new barn to accommodate at least that many, the efficiency and quantity produced by using the new robotic milkers has made 100-head a number to work towards for the future. The robotic milkers have been in place since December 2018, when the new barn was completed. While the technology has helped, the brothers say it was a steep learning curve.

“Now that I know what to look for, it’s easier,” Dave says. “For the first little bit, I was kind of in the ‘old farmer’ stage where you’re going, ‘What the heck am I doing here?’ But you do learn it, and now I find it second nature to sit at the computer and check cows out.

“Most mornings, I walk in the barn – do a walk around, make sure everybody’s okay, make a pot of coffee,” Dave says. “And then the next 10 minutes I sit at the computer and check, and those are the most important 10 minutes of my day – to see what’s going on.”

“We can almost tell a cow is sick before the cow can tell you she’s sick,” Doug says.

The Johnstons have been using composted bull manure bedding for years. “Our vet was quite skeptical right off the bat, and now she’s almost bragging about it,” Doug says. “It’s something different, and we’re using a renewable resource that we’re going to put on our ground anyway.

“We are ecstatic that we have these manure suckers and they’re working really well for us.”

The two manure collectors alternate which side of the cow enclosure they clean; while one is out sucking up manure, the other dumps its contents through a floor grate into storage, fills with water and charges for 45 minutes before going back out.

Though the new technology may take some getting used to for humans, the learning curve for cows is just one day.

“Once they get used to the noise and the thing moving, cows are fairly easy to adapt,” Dave says.

“I think we’ve had more trouble learning than the cows have, because we have to remember to shut it off when we catch cows, because it won’t stop – it’ll take a cow down,” Doug adds.

The Johnstons use straw for bedding for their heifers, calves and springers, but not for the cows they’re milking. 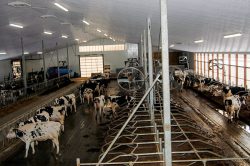 Atop the robot room, the Johnstons can keep an eye on the dairy cows. Photo by Alex Barnard. 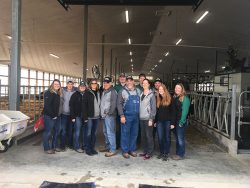 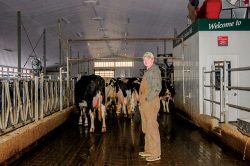 Planning for the future
Dave and Doug’s mother, Marcie, emphasized succession planning as a part of farm management. This made the transition easier when their father, Sam, passed away suddenly and unexpectedly in 1998, and when Marcie passed away from cancer a couple years later.

“We’ve basically been here now for 20 years with no grandparents [for the kids],” Doug says. “It’s been an interesting go.”

The brothers have been in charge since the late 1980s, when Sam told them that he no longer wanted to run the farm.

“I was already doing all the books. So, the transition was already well underway,” Dave says. “It was just, you missed that shoulder to lean on and the guidance.”

“Succession planning was always a forte of my mother’s, and she pushed it all the time,” Doug says. “We used to have monthly meetings within the family.” The brothers began having more regular conversations about succession with the construction of the new barn and the meeting space it contains.

“We probably have the bad problem that we have too many kids interested in farming,” Doug says. Their seven combined children – Doug has three, Dave has four – might not end up in farming, Doug says, “but they’re all interested in the agriculture business.”

“We try to have fun farming,” Dave says. “With my kids, Doug’s kids, whoever – I try to make coming to the barn enjoyable, so that they want to come to the barn.”

The two brothers have a policy for their children when they finish their education: rather than return to the farm immediately, they suggest the kids find a job off-farm to gain some varied experience.

“We’re not worried about them not coming back,” Doug says. “We’re actually trying to figure out how we can fit as many as we can in. It’s a nice problem to have, but it’s a problem.”

Marcie was also a school teacher, and for 25 years every fifth-grade student would visit Maplevue Farms. Now, the brothers find that their former classmates want to bring their own children to the farm to have that same experience.

“In a rural school, you have two kids out of 25 that are from a farm,” Doug says. “We’re under two per cent of the population now that are actual farmers. So, we’re trying to help out by helping educate the public.

“And this is part of the reason that we don’t mind hosting the Manure Expo either, because I think people need to see the technology that’s in manure, too. [The manure’s] not something that we get rid of.”

Greater than the sum of its parts
All of these innovations and practices are part of one cohesive whole. How do the Johnstons approach whole farm management? “Running it like a business,” Doug says.

“But it’s right from one end to the other. From nutrient management, to rotation of crops, to the genetics we use on our cows, to financial planning: it’s the whole farm picture, and that is what is so hard to teach,” Dave adds. “You can teach some of it, but most of it you learn year after year.”

“And we don’t do things because Dad always did it that way.” Doug says. “We always change things to try to say, why are we doing it this way? Does it make more economic sense to do it this way? We may not get top yields; we might get a more economical yield.”

“It’s also the public image,” Dave adds. “Farmers, we have to watch our public image, watch what we do, even how we drive on the road with tractors.”

The scrutiny farmers find themselves under is just one more thing Dave and Doug balance in the business of running a farm. It’s a job that requires them to wear many hats, but they find ways to make the job their own.

“For me, whole farm management is looking after every aspect,” Dave concludes. “It’s the complete circle. And we have different areas of expertise. Don’t ask me what kind of corn we grow, but don’t go out and ask Doug what name is on cow 1163 and her pedigree – I can tell you that.”

“Trying to be good at a lot of things, but not being too proud to bring expertise in when you need it, too,” Doug adds.