Dukestead Acres installs a robotic bedding system, using separated manure bedding – the first of its kind in the United States. 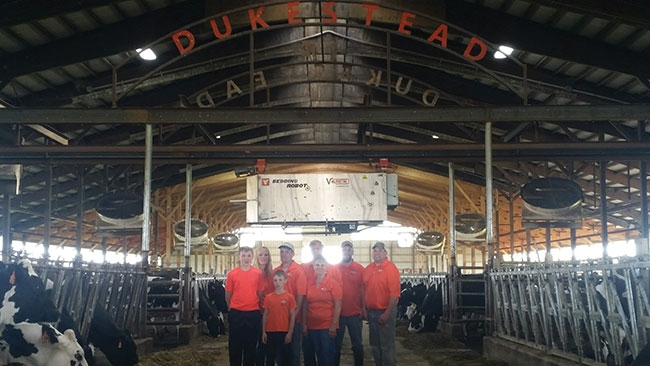 The Dukelow family from Dukestead Acres, near Abbotsford, Wisc., has installed a track system to bed the operation’s freestalls robotically with recycled manure solids. Contributed photo

In the summer 2017, the family-owned and operated Dukestead Acres dairy farm, located outside of Abbotsford, Wisc., wanted to add onto their milk barn.

“We were hesitant because our manure pit was getting kind of small for the cows we wanted to add on, and we didn’t really want to add on to our manure pit,” recalls Greg Dukelow.

The farm family first looked into alternative bedding. They decided to install a DODA manure separator, using the separated material as bedding for the cows.

“We were really happy with it,” Dukelow says. “We transferred the cows from sand, to sawdust, and then to the manure bedding.”

The cows were happy – even seemed cleaner – but the Dukelows weren’t thrilled about changing bedding about every five days. They wanted a less labor-intensive system, and decided to explore automation.

The Dukelows reached out to their friend and neighbor Jim Maki of Maki Farm Services, who is also a Valmetal dealer.

“Jim and I got to thinking about the track system Valmetal had for feeding,” Dukelow says. “We started talking with Valmetal, asked if we could make their feed track system into something that we could use for bedding.”

It had never been done before but that didn’t stop Valmetal, which specializes in the designing and manufacturing of equipment to mechanize and automate most processes for the preparation and distribution of food to farm animals. Soon a bedding system was developed.

“A real unique aspect of this system is it is able to load the free stalls robotically,” says Greg Lueth, territory manager at Valmetal. “No intervention from the dairyman at all. No skid steer loaders that have to go in and bed the stalls. This is the first installation we did of this kind. There are no other installations in the U.S.”

With Valmetal and Jim Maki’s help, the Dukelows installed their automated track on the I-beam of their 111-foot by 400-foot barn.

“The I-beam is set on the main support posts in the building,” says Lueth. “Our dealer built an I-beam track for the robotic spreader to run on. It runs like a rail system above the cows, above the free stalls.”

Four different tracks run through the barn, totaling about 1,800 feet of track. The bedding cart that runs on the tracks is programmed where and when to deliver the bedding. The carts spread out the bedding into the stalls, and barn fans quickly dry out the bedding.

“We bed about 24 cartloads a day with the two carts we own,” Dukelow says. “One cart does the north end of the barn and the other does the south. We have a room in the center of the barn that houses the separator. The cart goes into the room, which automatically tells the conveyor to start up.”

“As the robotic rail cart runs down the rail, it has the ability to switch the rail and go south or to switch and go north from the middle of the barn, to be able to bed the stall,” adds Lueth. “And it’s all PLC controlled to be able to do the switching.”

Another challenge to the project was devising a way to interrupt the flow of manure before it flowed into the lagoon. The Dukelows installed a 2,000-gallon pit under the barn to catch the waste.

Under the separator is a TMR mixer.

The Dukelow family from Dukestead Acres, near Abbotsford, Wisc., has installed a track system to bed the operation’s freestalls robotically with recycled manure solids.

“When the scale on the TMR says the separator needs to produce more bedding, it starts an agitator up about five minutes before it starts the pump up. Then it stirs our little pit up inside,” Dukelow explains.

Using this method, the farm creates between 10,000 and 12,000 pounds a day of the dry, separated product, and the cows get bedded five times a week.

Even though this is a first-of-its-kind project, Dukelow says it’s gone fairly smoothly.

“I have to tip my hat to Maki Farm Services and Valmetal. They were there and they helped us out. And as far as the separator, DODA has been nothing but good to us too, to keep us going.”

Initially, there was some concern that using manure solids as bedding could increase mastitis. And Dukestead did notice a change when they tested the somatic cell count.

“Our cell count has gone up a little,” Dukelow says. “We were at about 100,000, and we did go up a little. But we had a couple learning issues that we just didn’t quite catch right away. But now, it’s been going pretty good.”

To-date the system is proving itself efficient and saving the farm money.

“We figure the separator will pay for itself within a year and a half because of the sand we’re not using,” Dukelow says. “And there is less wear and tear on all the manure equipment – getting it in and out. It also saves a lot of room in our manure pit, because we’re not putting all that sand back in.”

Another benefit they like is that bedding is always available.

As for the liquids coming off the separator, Dukelow says there’s some run back into the collection pit to keep the content constant for the separator, but most of it goes out to their manure pit.

“There’s a pipe to our manure pit and on the days that we don’t use the separator, we just open a valve and all the manure will go right out to the pit. Not all of our manure we use for separating right now.”

During the spring and fall fertilizing period, spreading has become less demanding because there are less solids in the pit for the Dryhill manure pump to pump out.

“We’ve just cleaned out our manure pit, and it was so much easier,” Dukelow says.  “Before, when we had sand in it, we ran three pumps and we were constantly having trouble getting the sand out of the pit. Now, we run one pump and it just pumps easily. We are very happy on that end.”

The Dukelows have also noticed other labor-saving advantages. For example, there is no longer a need for someone to open gates manually to handle the bedding. And there is no more wear and tear of banging into gates with the machinery.

“We figure it saves a person four-to-five hours of labor a day moving to this system,” Dukelow says.

When they converted to the new bedding system, the family also installed Jamesway Dura-Chain alley scrapers in order to reduce the disruption to cows and reduce their labor for cleaning.

Dukelow also noticed that the when the cows are in, they are less stressed with the spreader than when skids were involved.

“The cows make nothing of it [when the cart spreads the bedding],” he says. “We also have cow brushes in the barn, so if they do get a little bedding falling from the cart on them, they can clean themselves off.”

“The bedding is so light, it’s just this fluff that drops on top of the cows. I didn’t even see any of them react as it fell.

“It is unique and it really does work. The key is that the spreader fluffs the bedding and puts it in so light. And it does it twice a day. And you save a lot of labor. In addition, it saves a tremendous amount of cow movement – to be able to go in and bed with a skid steer loader or a shooter. This will allow [Dukestead Acres] to save cow flow disruption and save labor, and to be able to do that last piece of automation in their barn.”

Dukelow says there is still some raking involved. They rake by hand before each milking and level the stalls each week with a bar on the skidloader. But overall the hours of labor have dropped significantly. And for the Dukelows, labor savings was one of the goals, since all partners would rather keep it small and family run. Currently, Greg, his older brother, Chris, and younger brother, Jon, are equal partners after purchasing the farm from their parents.

“Although our mom and dad aren’t owners, they still do quite a bit on the farm to help us out. We also have two full-time employees and several part-time.”

In addition, Chris’s wife, Monica, helps out as well as their boys, Aaron and Nathan.

“It’s a family farm. Everybody pitches in and does what we can do. We’re at a comfortable level but we want to keep progressing but just not building up,” Dukelow says. “So, we are looking for more automation, maybe getting some robots in for milking.”

He says for those that are interested in seeing the spreader system in action, they can contact him directly.

“We’ve had several tours since the install. We’ve toured farms for different reasons, so we always look forward to helping people out if they have any questions.”