Features Dairy Manure Management Research
Clearing the air, one cow at a time 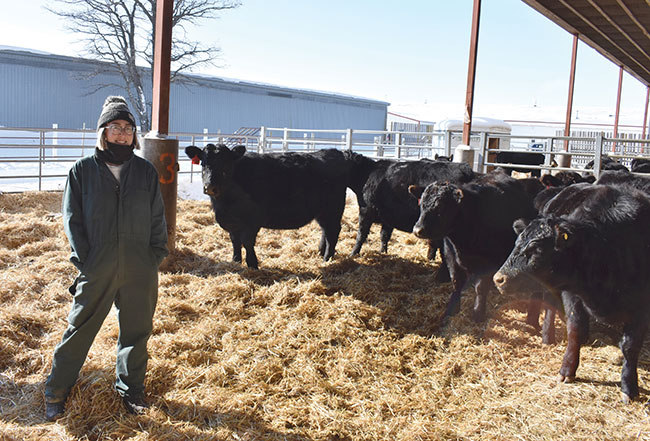 Ominski’s role in the project is to oversee animal management and supervise graduate student Rhea Teranishi, who is conducting a feeding experiment to assess four different diets designed to reduce methane (CH4) emissions.

Diet has a huge influence on emissions, Tenuta says. “The biggest factor impacting N losses in the manure itself will be the amount of protein that is ingested as part of the feed – the percent of N that the animal is taking in as part of their diet ration,” he says. “The lower the protein, the lower the nitrogen output.”

But the research won’t look at diet alone: Tenuta says an important factor in the quality of manure is bedding management. When cattle are confined over the winter, bedding is provided; any resulting solid manures will include bedding material, which changes manure composition.

“We had a grad student a number of years ago who looked at different solid manures with different ratios of bedding, and the highest composition of bedding resulted in the lowest nitrogen losses when applied to surface soil,” he says. “That got me thinking: we can control the bedding amount, so if we alter the amount of carbon added to manure in bedding, let’s see if that ties up carbon so we can add it to the soil.”

Diets
Ominski and Teranishi are conducting the feeding experiment at Glenlea Research Station in collaboration with the University of Manitoba’s National Centre for Livestock and the Environment. A team of dedicated technicians is responsible for much of the experiment’s implementation.

“We know low protein diets cause higher methane emissions because there’s an element of the nutrient profile missing in the rumen. Low protein is one of the strategies by which methane is increased,” Ominski explains.

“The third diet is adequate protein hay but similar in quality to the second diet, and we supplemented that diet with sunflower screenings,” she says. “Fat has been shown to reduce enteric methane emissions in other trials.”

Ominski says incorporation of fat can be challenging – it can form only a small amount of the animals’ diets due to the risk of digestive disturbance. Balance is key.

The last diet, Teranishi says, contains slightly higher protein content than the two previous diets, and it contains a legume that has been shown to reduce enteric methane emissions.

The potential for supplementing animal feed with oilseed byproducts is of great interest to the industry, Ominski says.

“Low protein diets typically cause higher methane emissions, and that’s why there are opportunities here to add byproduct feeds,” she says. “Balancing diets to meet requirements is kind of a win-win, because feeding animals byproducts reduces enteric methane emissions and typically improves performance.”

Tenuta adds that a protein deficiency can impede animal performance, but there is room to adjust protein levels. Livestock producers want to know if they can utilize such “waste” products as oilseed production increases on the Prairies.

Measuring emissions
Manure stockpiles used for the experiment are housed in a covered structure with open sides, and measure roughly 15 square feet at their largest and about eight feet tall as they shrink over time.

Tenuta says he has not been satisfied with past techniques for measuring nitrogen losses from piles; this study uses a new approach. A hood made of furnace ducting and measuring about 29.5 by 79 inches (75 by 200 centimeters) is placed on the top of the pile.

Flux chambers are constantly gathering readings on a given pile, but the researchers move them around three times a week, Tenuta says.

The experiment hasn’t been underway long enough for researchers to draw conclusions. Early on, when the piles were first set up, Tenuta says carbon dioxide and ammonia emissions are high as microbes begin to degrade the material. When wet material is added to piles, methane emissions increase, but they stop once the piles dry down.

Emissions from stockpiled cattle manures have never been measured in this way, and the researchers are excited about potential applications, he adds.

The experiment doesn’t reflect producers’ practices – most manure piles are larger and taller than those in the experiment to minimize surface area water can reach. But it will add to the industry’s knowledge of how animal and manure management practices influence emissions.

Extension efforts will be directed at producers to communicate the results of the study on its completion, Ominski says.