Could your operation benefit from intermittent aeration? 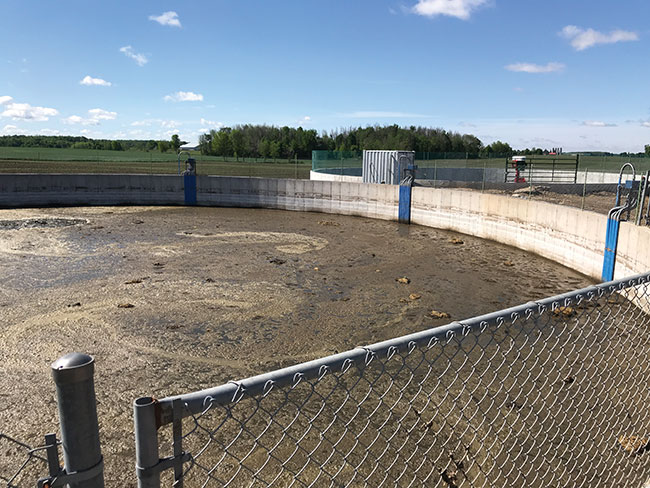 Intermittent aeration commonly runs for several hours at a time, several times per day and can cost CAD $5 to $7 per day. All images courtesy of Christine Brown.

Manure management has grown by leaps and bounds in the last few decades – and no one can argue against the benefits of many of those updates. However, while new solutions are innovative and attention-getting, experts say not every solution is the ideal solution for every farm, and that sometimes things from the past are worth revisiting.

For example, anaerobic treatment is currently a much-talked-about topic – digesters are seen as a big growth opportunity and a way to create renewable energy. But aerobic treatments, such as intermittent aeration, are not without their benefits – and for some farm owners, they can be a better choice depending on the circumstances.

The key is knowing what those circumstances are.

Christine Brown, field crop sustainability specialist with the Ontario Ministry of Agriculture, Food and Rural Affairs (OMAFRA) and Dave Bray, environmental specialist with OMAFRA have seen how intermittent aeration can deliver significant benefits to farm practices. It was during their search for tour stops for the 2021 North American Manure Expo that they came upon the intermittent aeration technology. After becoming curious about its benefits, they included it as a tour stop.

A short while after the Expo, the team found a producer who had been using this process for about seven years. Upon gaining even more insight to the longer-term benefits to the process and wanting to share those with others, the greater look into intermittent aeration manure treatment began.

“Aeration is beneficial to farmers for several reasons, but it depends on the needs of the farmer,” says Bray. “Aeration can reduce [or] eliminate the need for agitation of the manure prior to land application. This saves time and money.”

He adds that the practice of aerating manure also helps to create a more uniform method of distributing nutrients while within storage so that when it is applied to the fields, it allows for a more even application of those nutrients onto the land. Plus, nutrient availability (and therefore crop uptake of nutrients) may be enhanced by the microbial activity aeration contributes to.

And while anaerobic digestion has been hailed as a sustainability solution, there are potential environmental benefits to aerobic treatments as well. “Research in Europe suggests that aeration can reduce methane emissions,” Bray also notes.

Just what is aeration?
In the most simplistic explanation, aeration is the process of mixing manure with air to encourage bacterial growth.

Stirring a manure pile isn’t exactly a new concept. It’s a practice as old as animal husbandry itself. However, what is relatively new is the timed injection of air through a series of rotary valves to create an intermittent process. This keeps the manure in a liquid state and helps it break down as bubbles of oxygen are forced in and rise up through the slurry. Intermittent aeration doesn’t create the nitrogen volatilization that constant aeration would lead to.

As oxygen is supplied on a continuous basis, it allows aerobic bacteria to digest or breakdown the organic matter within the manure to make nutrients more readily available to crops when spread on fields. This is quite different from anaerobic digestion where oxygen is used up quickly and volatile organic compounds (VOCs) are produced at significant levels. This leads to greater methane, CO2 and undesirable odors.

“Pipes on the floor of the manure storage release the air which aerates the manure and maintains the aerobic state,” says Bray. “There are a couple of different systems in place, but the basics are the same.”

“The intermittent aeration system is still relatively new in North America, but is popular in Europe and therefore is worth investigating,” adds Brown. She and Bray point to brands such as the EasyFix slurry management system, which is one of the options currently available on the market. Another is the Dairy Power manure management system. These systems are both slightly more common in European countries. 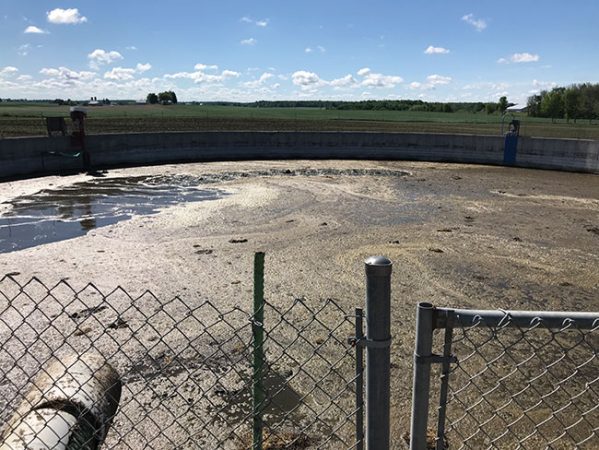 Why choose an intermittent system
Brown notes five main reasons to consider an intermittent aeration system. First and foremost is the reduction of odor both around the barns (as well as drifting to neighbors) and during application.

“[This] makes this system great for dairy farms that surface apply manure immediately after hay harvest during summer months,” she says.

Plus, this provides an additional, significant benefit for farms that are in a rural/urban fringe area.

Second, as previously noted by Bray, manure that is agitated through aeration is always ready for application so there’s no need to agitate prior to spreading. This results in saved time, less equipment and less labor.

Third, which Bray also mentioned, the application of manure (and therefore its nutrients) is far more uniform when using intermittent aeration practices.

Fourth is the benefit to the environment. There is less methane loss which improves greenhouse gas emissions from livestock and dairy farms.

And fifth, the intermittent aeration processing of manure is an aerobic practice and allows those desirable microbial populations to grow and flourish so that they can break manure down similarly to a composting approach.

While it can be assumed that this means a quicker take up of nutrients by crops the processed manure is applied to, assumptions can be dangerous and there is a need to look further into the bioavailability of nutrients to crops.

“[This] would result in a more natural or balanced manure,” says Brown. “Questions about speed of nutrient availability to crops need investigation with field trials.”

Ongoing research to determine viability
“There is still some work to do to evaluate these systems,” she says. “But from a greenhouse gas perspective, an intermittent aerations system could be compared to anaerobic digestion.”

“Farmers we spoke to thought that the cost to run the system was low [electricity], low maintenance and provided cost savings over the long term – no need to agitate the storage prior to land application,” says Bray.

Brown notes that system costs must be compared looking at the lifetime of the manure storage and consideration of elements like ongoing water transportation, equipment needs, labor costs for manure applications, proximity of application fields from the storage areas and any maintenance costs. Obviously different manures will also have different results.

“And the end product – digestate – has a nutrient composition that makes it a great fertilizer, but more difficult to manage because of very high water content and proportionately higher ammonium N compared to organic N, combined with high pH,” says Brown of the anaerobic systems. “[It has a] higher volatilization potential than manure from [an] aeration system, unless digestate is injected.” 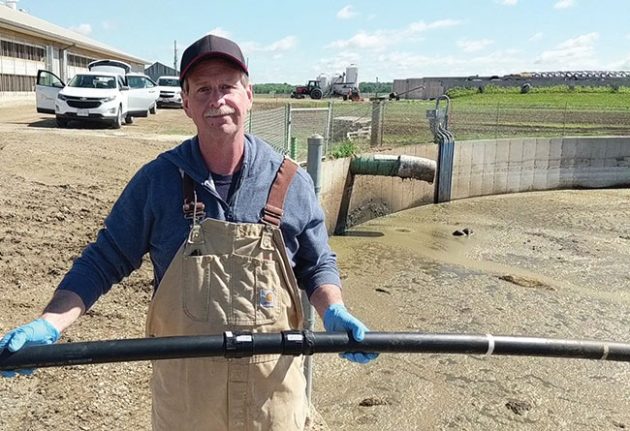 The proof of an intermittent aeration system is in the use
The system itself is relatively simplistic and despite aerobic processes being as old as dirt, new options make use of modern technology like other manure processing methods. The compressor is connected to a clock and at intervals, air feeds through to the valves. This is then distributed through the system and a pneumatic rotary valve system alternates through the ports so that only two or four (in a larger storage) ports are jetting air through the slurry at any one time. Because the ports alternate, air is distributed throughout the manure pit evenly, ensuring liquidity and agitation.

“We’ve got several farmers in Ontario that have installed these aeration systems,” Brown says.

A big reason for their adoption of the system was reduction of odors.

Simon Signer of Sigview Dairy Farms says his system runs approximately three hours at a time, three times per day to create eight to ten minutes of air time per nozzle that’s pushing air through the manure. The cycles are set to allow for minimal disruption but also one cycle when someone is in the barn who can listen and be sure things are working properly.

“It’s improved air quality in the barn which is going to help with the health of the animals and the quality of life that they have,” he says. “For operating costs, it’s a very simple system, it’s very few moving parts.”

He adds that even if a repair is required, there isn’t any harm in shutting things down for a week or two.

In North Perth, Ontario, Dave Van Den Braak farms with his daughter at Van Den Braak Farms. Together, they built the aerobic intermittent aeration system into their site when they put in a new barn. It didn’t require much in terms of added resources for installation. In fact, Van Den Braak says it was quite an easy process and the payoffs have been considerable.

“We decided to install this aeration system, basically it’s a new concept for North America, the biggest advantage to me is agitation time,” he says. “The pit is always ready to empty. Everything is consistent. The first load is as good as the last load.”

He thinks the economic benefit is huge, noting that for him, it’s about CAD $5 to $7 a day to run along. This combines with all the other benefits of reduced odors, speed and affordability of application and uniformity of nutrient application.

If it’s time to consider a new method for manure processing, looking to the past, with a dash of technology, may be exactly what makes the most sense. •

Related
Webinar: Prevent solids build-up in pit and lagoon systems
What you need to know about pit safety
How the safety conversation has changed
Finding the “Cadillac” of manure storage systems
Tags