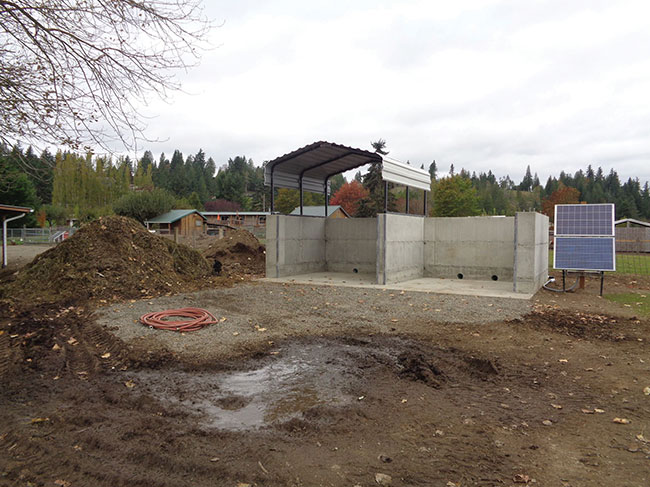 Storing dry manure in two cement bins with a roof was considered the “Cadillac” of storage solutions in this study. All images courtesy of American Farmland Trust.

In 2019, the American Farmland Trust (AFT) received $310,000 in funding from the United States Environmental Protection Agency (EPA) in order to evaluate the effectiveness of on-farm conservation practices as they relate to the storage of solid manure.

“Although the project officially started in 2019, due to a number of complications, including the COVID-19 pandemic, we actually installed the manure management practices in the fall of 2020, and we began collecting data from October of 2020 through to May of 2021,” explains Addie Candib, Pacific Northwest regional director, American Farmland Trust.

Washington State has a long tradition of dairy farming, adds Candib, “But our target audience for this project was not the large-scale dairies, because they tend to have very robust systems in place [to manage their manure], namely manure lagoons. Our target audience for this research project was those small farms and farmsteads, where they have a handful of livestock.”

Two farms were chosen for this study: one with six alpacas, 65 sheep, 12 goats, 100 chickens, and 40 ducks; the other with two horses. “That’s really where we saw the gap,” Candib adds. “It was in supporting those smaller [farms].” Both farms are located in King County, WA, in a part of the country that typically sees a lot of rain.

Scarlett Graham, conservation research specialist, Whatcom Conservation District explains why manure storage is particularly challenging in this climate. “We tend to have a long wet season, and then a very dry summer,” she says. “The rain usually starts in earnest in October, and it usually goes until about May with the highest rainfall being in the wintertime. We can get over 35 inches of rain between October and March, and then in the summertime, we can get zero. So we definitely have this need in the wintertime for people to have a place to store their manure because there’s really no agronomic reason to be putting it on their fields when it’s very dark and very wet. Then, in the springtime, they want to be able to access that manure and put it out into the fields.”

Improper storage during the wet months can result in runoff and leaching of manure nutrients. Candib says this is as significant a problem in this part of Washington as it is in other parts of the country. “It’s a pretty sensitive ecosystem, we get a lot of rain and we have critically-endangered species living in our riparian areas,” she explains. “Primarily, it’s salmon that we’re concerned about.”

One way to deal with this problem is to support livestock owners by helping them make better manure management decisions. “But you can imagine that if you’re a small farmer raising livestock, and someone comes and says, ‘You should really be managing your manure this way or that way,’ and that it’s going to take time and money to make changes, you’re going to want to know why,” explains Candib. “You’re also going to want to see the data that proves that this is going to make a difference. What we found is that this data wasn’t there for our region.”

The initial goal of this manure management study was to come up with empirical data that could be used to prove to farmers that the way they store their manure during the rainy season could have a major impact on the ecosystem. “We set out to provide a better understanding of how manure management can make a difference,” adds Candib.

Many of the farmers who raise livestock in the area simply put the manure into a pile on the ground, says Candib, adding that the King Conservation District team often recommend the ideal storage system, which can result in pushback from the farmers.

“We started calling it the ‘Cadillac’ version of a manure management system. This is where you have three bins made of concrete, and a roof across the entire structure,” explains Candib. “But that’s a big investment, especially if you’re a new farmer, and maybe you don’t have a lot of extra capital. Or if you don’t own your land, if you’re leasing your land, and you have a limited ability to make long-term investments in the property. Or if you’re just getting started with livestock, and you’re thinking, ‘I’m going to try this out for a couple of years. I don’t really know if this is for me.’”

With all the scenarios mentioned above, where the “Cadillac” solution might not be possible, the goal of this study was to find a solution that would be a better alternative to simply storing the manure in a pile on the ground.

“We were really trying to answer the question, ‘What would happen if the farmers did something better than simply putting the manure in a pile on the ground, but not as expensive as a three-bin system?” adds Candib.

With this plan in mind, the study looked at four ways to store/manage manure. Besides the aforementioned pile on the ground, and the “Cadillac” model with cement bins and a roof, the better solutions included a pile on the ground covered with a tarp, and a pile on a cement slab, but without a roof or tarp as a cover. 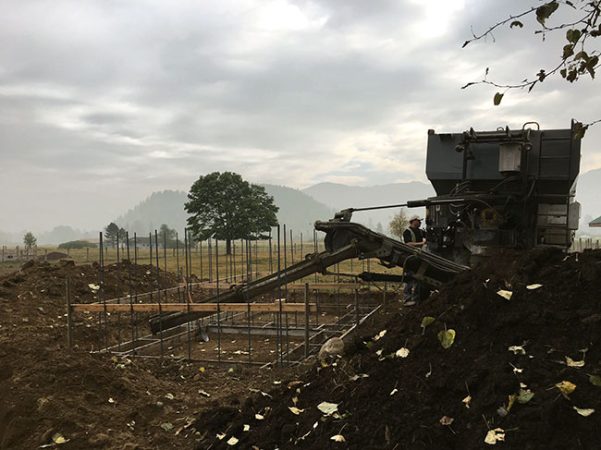 Samples and analysis
According to the report published by AFT, the two piles on cement slabs (slab covered and slab uncovered) were assessed for runoff via collection of stormwater leachate (combination of stormwater precipitation and/or manure leachate from the piles) via six-inch PVC pipes built into the back of the manure bunker slabs. The water samples were sent to a laboratory for analysis of fecal coliform, total kjeldahl nitrogen, nitrate-nitrite, total phosphorus, salinity and/or total suspended solids.

The two treatments on dirt surfaces (dirt covered and dirt uncovered) were assessed for leachate losses below the piles via monthly 12 and 24-inch profile soil sampling. The samples were sent to the laboratory for analysis of fecal coliform, total nitrogen, nitrate-nitrite, total phosphorus and/or salinity.

Major takeaways
At the end of the study, organizers came to a number of conclusions. Candib explains, “The key takeaways [are] that the covered manure, whether it was on a permeable or impermeable surface, had less runoff and less leaching. Manure that was on the concrete slab – sounds obvious – but it had no leaching. The concrete slab can be engineered to contain stormwater and generally reduce the runoff.

“And then, I think this is a really key takeaway for farmers or landowners: manure that’s covered is drier, it achieves a greater temperature, and the end result is a better product with more nutrients.”

It’s clear from this study that manure management makes all the difference. Covering your manure, whether with a roof or a tarp, is going to have less impact on the ecosystem, and it’s also going to create a better composting product. In addition, says Candib, “Storing manure on an impermeable surface, whether that’s a concrete pad or a tarp, whenever possible, is going to reduce nutrient loss and leaching into the soil on the groundwater.”

Phase two
Due to the impact of COVID-19, as well as a number of setbacks along the way, the study wasn’t able to provide as much data as the organizers had hoped. “The two study sites are still active, and we’re going to start sampling this season,” explains Laura Redmond, landowner incentive program coordinator, King Conservation District. “We need a more robust data set, which is why we’re continuing. We do have funding secured, and phase two is going to start ramping up here in the next couple of months.”

Candib offers more insight to some of the challenges they faced throughout the study period. “This was designed to be a two-year research project,” she explains. “But because of COVID delays, we only had one year of data collection, and in that first year, we experienced some real hiccups. For instance, the treatments that we had on dirt at both sites, because of our lack of knowledge about the sites, ended up being saturated by standing water on the ground. So that invalidated those findings, and we had to move those piles halfway through the study.

“We also ended up having a very dry spring, and so we ended up with a lot less data than what we had hoped for. But I think we all recognize that this was a great start. More data is really needed to refine these findings, and be able to speak with competence. We can offer these generalities, but if we’re going to drill down into the details about specific nutrients, we need more data.” •