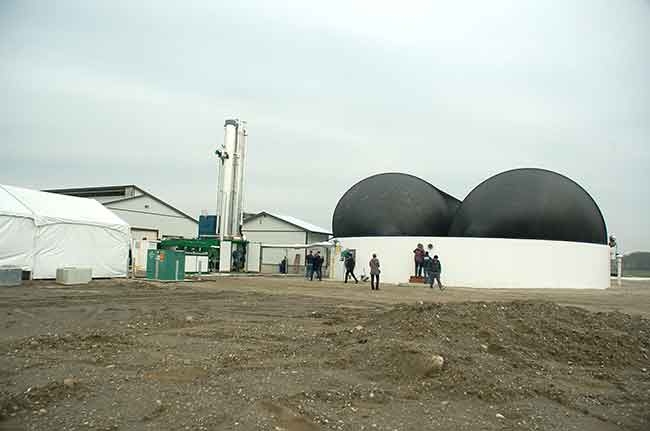 In 2013, the Canadian Biogas Association issued a study identifying the opportunities in biogas production so provinces could develop policies to support this budding industry. It also developed farm-to-fuel guides to help farmers decide whether biogas production makes sense for them.

She calls biogas an “overwhelming” opportunity for agriculture, saying agriculture could produce about two-thirds of the biogas, or about 1.65 million cubic meters per year.

While there are a growing number of anaerobic digesters on Ontario farms, there are only three in B.C., with one more under construction. The province’s first anaerobic digester began operation in rural Abbotsford about five years ago and is now producing gas from cull potatoes and other organic waste. Not long after, as part of its demonstration farm, Bakerview Dairy in Abbotsford put in a demonstration digester that utilizes manure from its tiny 50-cow herd to produce electricity for the farm.

In early 2015, Seabreeze Farms in Delta fired up B.C.’s second large-scale digester, using manure from its 350 milking cowherd and cooking fats and oils.

While one purpose of an anaerobic digester is to manage and create value from farm waste, it produces its own waste (digestate). The digestate includes most of the nutrients from the inputs, as they are not absorbed by the gas production process. This is a concern for both regulators and farmers as high livestock concentrations are already leading to nutrient overloading on many fields. Bringing in off-farm inputs only exacerbates the issue, leading to potentially serious environmental consequences.

As a result, the digester “is only one piece of the equation,” says Chris Bush, who built the Sumas Prairie anaerobic digester, located outside of Abbotsford.

That’s why researchers and industry are working on ways to manage the nutrients, particularly phosphate, to maximize their value while minimizing any detrimental environmental impacts.

There are a number of ways to do that, says Henno Haaring of Dorset Green Machines, based in the Netherlands. The first step is to separate the liquid and solid digestate so each can be applied separately or, in the case of the liquid, re-circulated. Cheapest is a press screen, which provides good dry matter content in the solids but has poor nutrient recovery. Another low cost option, a drum filter, provides good phosphate recovery but is not very efficient, has highly variable results and requires a lot of filter maintenance.

A decanter has high phosphate recovery and leaves little dry matter in the liquid but is expensive to buy and costly to operate.

A belt press is very good at separating solids and liquids, removing enough dry matter to make the liquid treatable by filtration or reverse osmosis. However, it requires additives and a knowledgeable operator.

Haaring says Dorset’s solution is to dry the digestate, which not only reduces the volume but creates a good final product.

“We generate a product with 85 to 95 percent dry matter that is 10 to 25 percent of its original weight,” he says. Its nutrient content depends on whether the drying is done with or without first separating the digestate.

“The dry product can be used as fertilizer, bedding or even fuel,” Haaring says.

One of Dorset’s installations dries 100,000 tonnes of hog manure, producing 25,000 tonnes of solids. The solids go into a “phosphate factory” which further compresses them into 6,500 tonnes of pellets with a nutrient content of 2.1 percent N, 6.5 percent P and 1.5 percent K. The pellets are then exported from the intensive hog production area in the Netherlands to the north of France.

Trident Processes of Abbotsford has integrated some of these technologies with ideas of their own to develop a complete nutrient recovery system, which it is now being tested at Seabreeze.

The system first separates the fiber and conditions it for reuse as bedding in the barns, leaving four percent solids in the remaining wastewater. A second press removes most of the remaining water, creating a “sludge” with double the solids content and 85 to 90 percent of the phosphate, 54 percent of the nitrogen and 17 percent of the potassium, says Bush, now Trident’s operating manager. It then uses polymers to concentrate the sludge, complete with its nutrients, into a “cake” which contains 25 percent solids.

The cake can be pelletized and sold off-farm as a nutrient-rich fertilizer. The remaining wastewater, which Langley environmental farm plan advisor and consultant Dave Melnychuk calls a “digestate tea,” contains very few nutrients.

Melnychuk believes the tea offers tremendous potential as it still includes some nitrogen but almost no phosphorus.

Noting many farmers “have too much phosphorus but not enough nitrogen in their fields,” Melnychuk has started a
three-year trial to find out how corn and grass respond to the tea. Even a low application rate produced a wet yield of 29 tonnes/hectare, higher than the 25 to 28 tonne average in B.C. fields.

“We are very pleased with the initial results,” Melnychuk says. He notes there was less phosphorus in both the corn and grass fields at the end of the season than at the beginning. “If we can validate that for the next two years, it provides an option for phosphate rich soils.”

University of B.C. civil engineering professor Victor Lo is trying a different approach: treating the manure before it even gets to the digester. He has spent the past few years developing a microwave-enhanced advanced oxidation system to reduce solids in the manure by 85 percent and extract the phosphorus and crystallize it as struvite, which is 95 percent pure phosphorus.

Lo says nutrients can be captured more easily when the solids are broken down and microwave technology is the only way to do that. The system “reduces the amount of disposable solids and number of nutrients which need to be applied to the land.”

He is now building demonstration units and conducting feasibility studies at both the UBC Dairy Education & Research Centre in Agassiz, B.C., and the James Wastewater Treatment Program in Abbotsford

Although the system may not be a money-maker because of its high capital and operating costs, Lo believes it could solve some of the environmental issues farmers and waste treatment plants face.