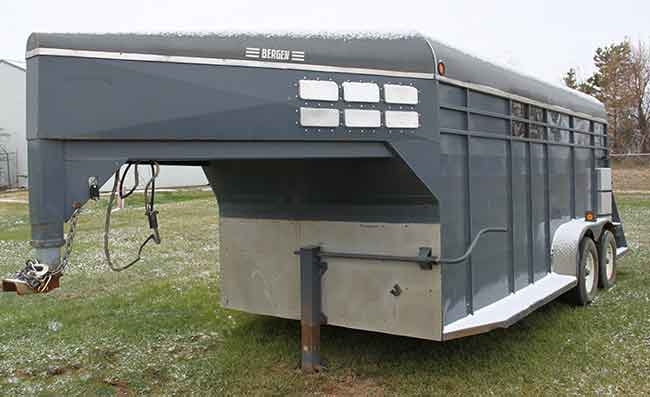 A goose-neck trailer retrofitted with the filtration system. All existing openings and leaks were sealed and then inlets and exhaust were installed. Contributed photos

The on-going spread of porcine reproductive and respiratory syndrome (PRRS) is a major concern in pork production areas of Canada, the U.S. and beyond. It’s a very serious swine disease that can be transmitted up to six miles through airborne means, originating in manure, saliva, urine, blood, semen and milk. Only a small amount of virus is needed to infect a herd, and it mutates easily, making vaccination effectiveness inconsistent.

The PRRS virus can survive up to six days in warmer temperatures and for years in frozen form. It particularly loves cold and damp, which means fall and early winter are the most dangerous seasons for it to spread. Advanced filtration technology is used in hog barns to protect animals from being infected by airborne diseases, but protecting animals during transport is also crucial.

“The risk of exposure to infectious pathogens of high-value stock during transport from breeding facilities to commercial farms can be significant, particularly during passage through pig-dense areas known to have outbreaks of airborne diseases,” notes Bernardo Predicala (PhD).

Predicala, who manages the Engineering Research Program at the Prairie Swine Centre in Saskatoon and is also an adjunct professor in the department of chemical and biological engineering at the University of Saskatchewan, has been working with colleagues to design, develop, and evaluate an air filtration system for a swine transport trailer. With his research assistants, Alvin Alvarado and Samantha Ekanayake, Predicala has fabricated, installed and evaluated a prototype filter system, with funding for the research partially provided by the Saskatchewan Pork Development Board, Alberta Pork, Manitoba Pork Council, and Ontario Pork. Funding was also provided by the Saskatchewan Ministry of Agriculture through the Canadian Agricultural Adaptation Program from Agriculture and Agri-Food Canada.

To design their filtration system, the researchers first surveyed the individual main components of existing filtered trailer systems in North America and Europe. These include temperature control (for animal comfort), filtration capacity, ventilation and air distribution.

“We looked at various options available for each,” Predicala recalls. “There are at least two options for each component – for example, it’s possible to use either axial fans or centrifugal fans for ventilation – so there’s a large number of possible combinations and therefore a wide variety of possible designs.”

He notes that it’s hard to describe the differences and compare the strengths and weaknesses of each design as any particular setup would be attractive to specific clients, but the same features could be considered a weakness for
other clients.

“For example, a fully air conditioned trailer will be suitable for genetic companies that do long-range transport of high-value genetic stock,” he says, “but it will be too costly for producers who only need to do mainly short-haul transport of weanlings from their nursery units to their finisher barns.”

After gathering all the information they could from a literature review, as well as from companies and other research organizations, the team formed an advisory panel composed of swine veterinarians, engineers, researchers, and producers to evaluate the various available options. Evaluation criteria included robustness, air quality, airflow, heat issues, power requirement and cost.

The final design (composed of an axial fan, pre-filter combined with high-efficiency filter, air inlets, and air exhaust vents with shutter) was installed on a commercial swine goose-neck transport trailer, and testing then commenced to determine the effectiveness of the system in maintaining a pathogen-free environment. Both MERV 16 filters (with pre-filters) and antimicrobial fabric filter were tested. Air samples were collected upstream (inlet side) and downstream the filtration system (inside the trailer) using a three-piece sampling cassette with mixed cellulose filter and a vacuum pump.

Predicala says testing was the biggest challenge of the project. This was mainly because it involved devising a way to challenge the effectiveness of the installed filtration system by actually generating bioaerosols outside of the trailer, and then trying to detect if any of this bioaerosol made it into the trailer compartment.

“All this had to be done in a biosecure way – that is, without actually using microorganisms that can cause diseases – so a benign bacteriophage was employed,” he explains. “This bacteriophage mimics the behaviour of representative pathogens, and is often used as a surrogate for pathogenic microorganisms in filtration studies.”

Results
Statistically, the two types of filters did not show a significantly different performance, but Predicala says that in terms of actual percentage reduction of bioaerosols, the fabric bag filters performed better than the MERV 16 filters. However, MERV 16 filters are much less expensive than fabric bag filters. In Predicala’s view, “there would be situations wherein MERV 16 filters are sufficient [e.g. short-haul trips, low risk of airborne infection along the route, relatively low potential losses], but for situations where higher risk is involved and the loss potential is large [e.g., transporting high-value breeding stock through routes with high pig density], fabric bag filters would be more suitable.”

With regard to the trailer filtration system in general, the research team recommends the installation of an environmental controller for better regulation of the temperature inside the trailer (for animal comfort), and also having a temperature-monitoring/carbon dioxide detection system with alarm function detectable in the truck cab.

“You also want to avoid high fan static pressure,” Predicala adds, “because it leads to more work by the fan motor to deliver the needed airflow, and consequently uses more power.”

One way to reduce fan static pressure is to provide larger openings for the air to flow through such as the inlet, the filter area as well as the exhaust vents.

Predicala and his team have not yet determined how often filters should be replaced, but he says the main parameter for this is the static pressure drop across the filter. If the filter gets too clogged up, it causes high static pressure for the fan, so the filter must be replaced before pressure drop reaches a pre-determined level. This could be anywhere from several months to a year, depending on whether the trailer is driven mostly on clean highways or dusty roads.

The filtration system Predicala and his colleagues have developed may also be used in dairy and beef cattle transport trailers.

“At least in terms of the aspect that deals with controlling the thermal environment in the trailer,” he notes.