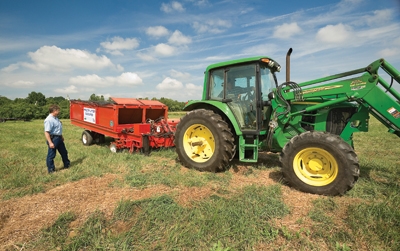 It isn’t even fully patented yet, but the Poultry Litter Subsurfer prototype invented by Agricultural Research Service soil scientist Dan Pote is on order by a research coalition across five Chesapeake Bay states: Delaware, Maryland, Virginia, Pennsylvania, and New York.

ARS is applying for U.S. and international patents on the equipment. One company has applied for a license to commercialize it.

The Subsurfer can carry up to five tons of litter for application below the surface of pastures without damaging the grass, much as a no-till planter places seeds. It can also apply poultry litter below no-till fields before planting.

In 2009, Pote demonstrated the Subsurfer at a Soil Conservation District/USDA Natural Resources Conservation Service meeting in southern Maryland as well as at the 31st Southern Agricultural Systems Conference on Virginia’s Eastern Shore.

In spring 2010, Pote teamed up with Karamat Sistani of the ARS Animal Waste Management Research Unit in Bowling Green, Ky., to test the Subsurfer on a farmer’s corn field near Owensboro, Ky. “This is the largest scale test we’ve done on corn fields,” Pote says. “We are comparing the Subsurfer to the traditional method of surface-broadcast application under field-scale conditions.”

As a collaborative project, Pote led development of the Subsurfer for pastures and no-till fields, while ARS agricultural engineer Tom Way’s team at the ARS National Soil Dynamics Laboratory in Auburn, Ala., focused on developing a different prototype with adjustable row spacing for litter application in row-crop systems and pastures.

Throughout the southeastern and Middle Atlantic states, poultry production is the primary source of income for many small family farms. Poultry litter is an excellent source of crop nutrients, but the common practice of spreading it on the soil surface promotes odor emissions, exacerbates nutrient runoff to nearby waterways — most notably the Chesapeake Bay – and allows ammonia nitrogen to evaporate. By minimizing nutrient losses, farmers can improve air and water quality and increase crop productivity.

Don Comis is a member of the Agricultural Research Service’s Information Staff.