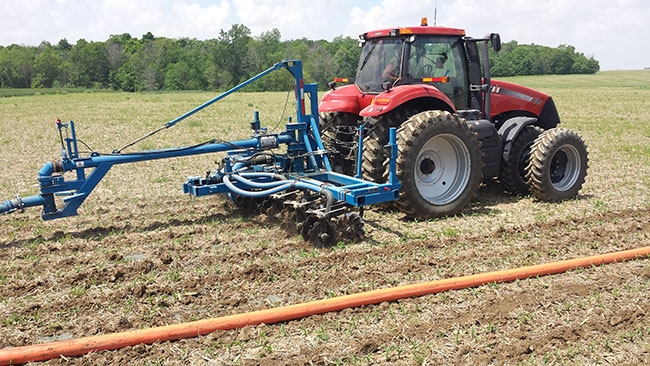 A research team in Ohio is working on in-field trials side dressing emerged corn with swine manure using a drag hose system during the V3 stage of growth. Contributed photo

All farmers strive to be good stewards of the soil in their fields and the surrounding environment, but they need both solid research and the right tools to optimize their success.

Phosphorus is obviously of particular concern to crop farmers.

However, Arnold notes that the over-application of livestock manure can raise soil phosphorus to very high levels and result in the element being lost through both surface runoff and through subsurface drainage tiles.

“We wanted to capture value from the nitrogen in manure and open up new windows of application for farmers, instead of them usually applying large amounts of manure in the fall after harvest,” he explains.

Arnold and his team approached swine farmers with finishing buildings for the wheat plot experiments, as swine manure has more nitrogen per gallon than dairy or beef manure. The Putnam County Extension Office and Soil & Water Conservation District collaborated on planning, flagging the replicated plots, field application and harvesting, with plots either receiving urea fertilizer or swine manure. When the results were analyzed, wheat yields under the manure treatments were equal to or greater than the urea treatment most of the time.

By 2009, Arnold, his colleagues and county extension educators in nearby counties were using swine manure to side dress corn plots.

A research team in Ohio is working on in-field trials side dressing emerged corn with swine manure using a drag hose system during the V3 stage of growth.

In addition to the swine-finishing manure side dress plots, during the past year the team tried liquid beef manure and liquid dairy manure, enhanced with commercial nitrogen, to side dress corn plots.

“We used a manure tanker and Dietrich toolbar,” Arnold says. “The beef manure plots performed as well as the swine manure plots. The dairy manure plots also preformed very well, which opens many possibilities for dairy producers to sidedress corn in the years ahead.”

At this point, the team has also completed a third year of side dressing emerged corn with swine manure in Darke County, Ohio, using a drag hose. The drag hose was pulled across the emerged corn through the V3 stage of growth, and the manure incorporated during application using a seven-row VIT unit. Over three years, the corn side dressed with manure averaged 13 bushels per acre more than corn side dressed with urea ammonium nitrate.

In terms of cost differences between urea and manure, Arnold notes that farmers have to eventually land-apply the manure regardless of whether it’s applied to a growing crop or not.

“Capturing the nitrogen value pays for the cost of applying the manure,” he says.

He also believes a drag hose is faster, more efficient and alleviates soil compaction concerns compared to using a manure tanker. Drag hoses also provide flexibility in that the manure can be applied anytime from the day the crop is planted through the V3 stage of corn growth, a six-week window in Ohio if the corn is planted in late April.

In these experiments on application of manure during the growing season, Arnold and his colleagues never measured phosphorus runoff, but he says that if manure is applied in the fall, more than 50 percent of the nitrogen is generally lost, and the tillage to incorporate the manure at that time causes more soil erosion than application during crop growth.

Farmers do have to watch over-application of manure to growing wheat as it will lead to the wheat field blowing flat in June in Ohio. On corn, Arnold says there is nothing to stop a person from over-applying but the extra nitrogen would be wasted.

All-in-all, Arnold believes the application of manure to growing crops works very well. He says the farmers who have participated in the on-farm plots have been pleasantly surprised at how well livestock manure has worked as a sidedress nitrogen source for corn and as a top dress to wheat.

“In addition to providing nitrogen for the corn crop, the manure can also provide the phosphorus and potash needed for a two-year corn-soybean rotation without applying excess nutrients,” he says.

In order to convince as many livestock producers as possible of the economic and environmental advantages of applying more manure to growing crops and applying less manure after the fall harvest season, Arnold and his team will allow farmers to see results first-hand. Because he’s found that farmers who participated in the sidedress plots using a manure tanker are very interested in using a drag hose, Arnold has obtained funds from several companies to build two 12-row drag hose sidedress toolbars. He expects to have them available for loan during the 2017 growing season.

“The plan is to loan the toolbars to both livestock producers and commercial applicators,” he says. “We hope to loan them out to more than a dozen participants this summer.”