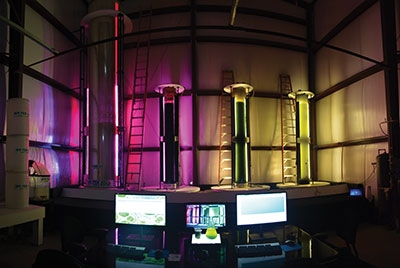 Carbon dioxide is a major contributor to global warming. By consuming carbon dioxide, plants like micro-algae can play a crucial role in reducing these emissions to the atmosphere. Diverse species of micro-algae live in aquatic environments and certain algae species have shown huge potential for helping the fossil fuel industry, in particular, reduce its emissions.

Micro-algae are photosynthetic organisms that need light, water, carbon dioxide and nutrients – mainly nitrogen and phosphorus. They can feed on compounds like carbon dioxide, nitrogen oxide, sulfur dioxide and volatile organic compounds emitted from such facilities as coal-fired power plants, releasing beneficial oxygen in the process and growing into a plant commodity with considerable commercial potential. Addition of nutrients like those in poultry manure makes the micro-algae grow faster and increases its production, like fertilizer added to a corn crop.

Micro-algae have immediate commercial potential in the fight against global warming, but Mroz says the real money is in the sale of the micro-algae plant material itself as well as the high-quality oxygen it generates through photosynthesis in the bioreactor tanks where it is grown. That’s because micro-algae contain valuable chemicals, such as lipids, that have existing commercial uses as a source of omega-3 fatty acid oil; as an additive in cosmetics, nutraceuticals and paint; and as an animal feed supplement. Mroz, who is also an electrical engineer and computer programmer, already has an overseas buyer for as much dry micro-algae material as the company can produce.

“The market is ridiculously large,” says Mroz, speaking about the demand from a variety of industries to mitigate their greenhouse gas emissions, with 600 coal-fired power plants in the U.S. alone and 50,000 globally. The reality, he adds, is that at present there is little legislative requirement for industries to mitigate their greenhouse gas emissions. So from a business perspective, while HY-TEK Bio is primarily focused on marketing the micro-algae’s proven greenhouse gas mitigation potential, it also wants to harvest and market the high-value micro-algae plant material itself and the oxygen it produces.

Since 2009, when the company was founded, it has come a long way in a short period of time. It started with two friends, Mroz and his vice-president of marketing, Jack French, looking for a cheap source of biofuel to use in an ultralight aircraft and has evolved into a company that has developed a patented process and bioreactor to use micro-algae in greenhouse gas mitigation.

The challenge for the company has been to find an inexpensive source of nutrient to fertilize the micro-algae and accelerate its growth to perform as advertised in a greenhouse gas mitigation application. Mroz says that as the company worked to develop its technology, it encountered organizations like the Chesapeake Bay Foundation, which expressed its concerns about poultry manure seeping into the region’s water drainage system and causing considerable algae growth in areas like the Chesapeake Bay. Because of this concern, and the availability of grants, HY-TEK Bio approached researchers at the University of Maryland, which it has been working with extensively for the past four years, to investigate poultry manure’s potential as a cheap nutrient source for micro-algae. The company already has a working demonstration facility with four bioreactors consuming flue gas emissions from a three-megawatt, biogas-fueled power plant attached to a City of Baltimore wastewater treatment plant. The city provided a $255,000 grant for the installation.

Through grants provided by HY-TEK Bio and the Maryland Industrial Partnership, University of Maryland scientists are now testing poultry manure as a natural fertilizer to feed micro-algae. The overall plan is to develop a pilot project that demonstrates a process that, in addition to showing how the micro-algae mitigates greenhouse gases, also demonstrates how the poultry manure-derived nutrients can be applied to maintain the growth and health of
the micro-algae.

Should the application prove successful and commercially attractive, this research could pay a significant environmental and economic dividend to poultry and egg producers, as well as help to solve a growing global problem. Not only would producers of poultry manure have a new and better method for manure disposal, but the process also could create a new potential income stream for them.

Dr. Feng Chen, an associate professor at the University of Maryland Centre for Environmental Science, says there are about 800,000 tons of poultry manure currently being generated annually in the Maryland and Mid-Atlantic area of the United States. Most of the manure is land applied as a form of disposal, but the problem is that sometimes the nutrients leach into the water drainage system. An alternative use of this poultry manure as fertilizer for micro-algae would direct that manure into a new, non-polluting direction. Dr. Chen says that if the technology is proven and shown to have commercial potential, the nutrient extracted from the total amount of poultry manure being generated annually in the Maryland/Mid-Atlantic area would easily be consumed as a nutrient supply for micro-algae in probably just a few, large industrial installations.

One area that has shown an interest in what the university and HY-TEK Bio are accomplishing with the use of micro-algae in greenhouse gas mitigation is the massive fossil fuel industry in Alberta, which has been identified as a notable contributor of carbon dioxide to the atmosphere, especially in its oil sands mining and processing operations.

The University of Maryland research has just started. It is being conducted at a basic level through the development of a system to economically extract the nutrients from the raw poultry manure, a process leading to methods of controlled release of the nutrients to the micro-algae to achieve certain performance targets.

Dr. Chen is working with Dr. Russell Hill, director and professor at the Institute of Marine and Environmental Technology (IMET) at the University of Maryland Center for Environmental Science. Dr. Hill says the university has spent the past two decades conducting research related to micro-algae, particularly as it relates to aquaculture. For example, IMET is improving a method for growing micro-algae that produces a high-value pigment that is added to the water where salmon are raised in fish farms. It gives the fish muscle the pink color that it normally acquires when the salmon consume micro-algae in a natural environment.

Research in North America related to commercial applications of micro-algae has a long history dating back to the energy crisis in the mid-1970s because of its potential use in the production of biofuels. However, since then, it has experienced numerous peaks and valleys of funded research. Both researchers agree that the current elevated interest in the commercial/industrial use of micro-algae is being driven to a great extent by growing interest in the development of the bio-economy, including the manufacturing of products such as biofuels, bioplastics, animal feeds and nutraceuticals, as well as the use of micro-algae to absorb nutrients from waste water. What’s also driving current research is development of technology investigating the plant’s potential in greenhouse gas mitigation.

There are many different strains of micro-algae – both good and bad. Some are extremely toxic and sometimes result, for example, in massive fish die-offs. Dr. Chen achieved a breakthrough in micro-algae science when he identified the HTB1 strain, which is particularly well suited for use in greenhouse gas mitigation. It is a local strain, so its use wouldn’t involve introducing a foreign strain into the local ecosystem.

While the research project is still in its early stages, the University of Maryland researchers say that they are “quite encouraged” by the results they have witnessed so far in using poultry manure nutrients to encourage micro-algae growth. The poultry manure they are using was collected from various commercial operations in Maryland. Now, the university is working on such issues as how to develop a consistent liquefied nutrient product from raw poultry manure, given the variability of the raw material from one poultry operation to another. Mroz says while there is some variability, they all seem to work well as nutrients for micro-algae growth. The main issue is cost of production involved in taking it from its raw form to a liquid.

“When you are talking about 500 to 1,000 of these bioreactor tanks to mitigate a power plant, the nutrient has to be really, really cheap,” says Mroz. About 400 of the company’s tanks can fit on one acre, “but we can use multi-story facilities to increase land usage.”

In addition to establishing an inexpensive process to convert the raw poultry manure to liquid form for use as a micro-algae nutrient, what HY-TEK Bio hopes to achieve through its research project with the University of Maryland is to determine if the brown color of the liquid manure is a deterrent to micro-algae growth because the algae needs as much light as possible to grow.

Should the university successfully develop a method to cost-effectively manufacture a clear, odorless liquid nutrient product from raw poultry manure, Mroz says, this also has potential as a marketable, commercial product.

Dr. Hill says the university’s research related to using poultry manure as a nutrient source for micro-algae is novel.

“If greenhouse gas mitigation using micro-algae is ever going to really be used on a large scale, the nutrient requirement will be huge,” says Dr. Hill. “It could really help to solve the problem of disposal of chicken manure, and potentially it could even put greater value on the chicken manure.”