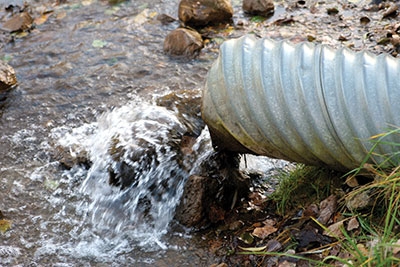 Threatened with huge fines and possible imprisonment, West Virginia poultry producer Lois Alt decided to stand up to the U.S. Environmental Protection Agency in court. In a case with implications for livestock producers in California and nationwide, Alt tried to sort out whether stormwater discharges from her farm actually require a federal permit. Her case won support from the West Virginia and American farm bureaus, which intervened in the court case on her behalf.

Recently, Alt won an important decision when the U.S. District Court for the Northern District of West Virginia ruled against the EPA, saying that ordinary stormwater from Alt’s farmyard is exempt from National Pollutant Discharge Elimination System permit requirements.

Alt filed suit against the EPA in June 2012, after the agency threatened her with $37,500 in fines each time stormwater came into contact with dust, feathers or small amounts of manure on the ground outside of her poultry houses as a result of normal farm operations. The EPA also threatened separate fines of $37,500 each day if Alt failed to apply for an NPDES permit for such stormwater discharges.

“This lawsuit was about EPA’s tactic of threatening farmers with enormous fines in order to make them get permits that are not required by law,” said American Farm Bureau Federation president Bob Stallman. “Lois Alt was proud of her farm and her environmental stewardship, and she stood her ground. We’re proud to have supported her effort.”

Alt operates an eight-house chicken farm with a ventilation system and a covered litter storage shed, a compost shed, and feed storage bins. Some particles of manure have been spilled and feathers have escaped the chicken houses. And, on occasion during rainstorms, runoff has flowed across a neighboring grassy pasture and into Mudlick Run, which is designated a “water of the United States” under the Clean Water Act.

Alt said when she first received notice of violation from the EPA she asked what she could do to comply with regulations.

“They couldn’t tell me anything,” she said. “All they could say, repeatedly, was, ‘Get a permit,’ no matter which direction I went. We knew it was not right.”

In ordering Alt to seek a permit, the EPA took the legal position that the Clean Water Act exemption for “agricultural stormwater discharges” does not apply to farms classified as concentrated animal feeding operations (CAFOs), except for areas where crops are grown. In other words, any areas at a CAFO farm where crops are not grown and where particles of manure are present would have required a permit for rainwater runoff.

“We are pleased the court flatly rejected EPA’s arguments and ruled in favor of Lois Alt,” Stallman said. “The outcome of this case will benefit thousands of livestock and poultry farmers who run their operations responsibly and who should not have to get a federal permit for ordinary rainwater from their farmyards.”

“The Alt case reiterates that producers do not have to obtain a federal permit for ordinary agricultural stormwater or rainwater leaving the farm,” Fisher said. “It also reaffirms that incidental litter or manure are related to raising poultry and therefore are related to agriculture.”

AFBF attorney Danielle Quist said that in standing up to the EPA, Alt put herself in a difficult position but didn’t want other farmers and ranchers who are good stewards of the environment to face a similar predicament.

“She didn’t want other farmers to be bullied by the EPA,” Quist said. “She stood up for herself, but she also stood up for others. This is a terrific win for farmers and ranchers in West Virginia and nationwide.”

Kate Campbell is an assistant editor of Ag Alert, a publication of the California Farm Bureau Federation.