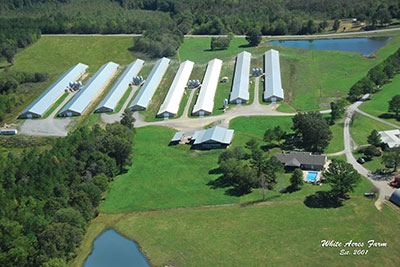 Garry Staples hasn’t always been a farmer, but the choice he made 12 years ago to get into poultry farming turned out to be a good one. This year, he and his family, who run White Acres Farm, received the U.S. Poultry and Egg Association’s Family Farm Environmental Excellence Award and he’s looking ahead to find new ways to improve upon farming and new uses for chicken litter.

Getting started
Garry says when he decided to get into poultry farming it happened fast. He and his wife, Denise, checked out a poultry farm in Steele, Ala., on a Saturday.

“We bought it the next Monday,” says Garry with a laugh.

From that point on, it’s been “all about chickens” for the Staples family. Garry’s passion for creating not only a profitable but also an environmentally healthy farm has been passed on to his children and grandchildren. In addition to Garry and Denise working White Acres Farm, their son Jeremy and daughter-in-law Becky also live on the farm and work it with them, along with their grandson Justin.

“My daughter Tori and son-in-law Ryan, also own their own poultry farm,” says Garry.

Upgrades
When Garry purchased the original farm, there were four barns and his first order of business was to upgrade them and create a better environment for chickens.

“We added tunnel ventilation,” says Garry. “We have 14 fans per house and 140 foot cool pads at each end too. It’s as cool in the barns as it is in a home during the summer.”

Garry didn’t stop with four barns. Over time, he built four more, and today White Acres has eight barns – six that are 40 feet by 500 feet and two larger ones that measure 54 feet by 500 feet. All the barns use the same ventilation system and together house 185,000 chickens.

Handling litter
With eight barns and nearly 200,000 chickens, Garry and his son have become experts at managing litter.

Garry is a contract grower for Pilgrim’s Pride, and once the company picks up the grown chickens, Garry, his son and his grandson have approximately two weeks to remove the litter from the barns and prepare for the next set of chicks.

Most of the manure is moved to a storage barn 40 feet wide, 80 feet long and 20 feet high. The storage was constructed specifically to house litter from the poultry barns and can hold up to 800 tons at one time. It has a concrete floor and Garry built a ramp to allow semi trucks to come up and collect 25-ton loads.

Currently, Garry has a buyer for his litter who picks up 25 tons at a time. The buyer takes it to Tennessee and sells it to farmers there who spread it on their row crops.

“We don’t have a lot of row crops in this area, so it works out well,” he says.

How did Garry find his buyer?

“I put it on Craigslist that we had litter to sell and it took three days to find someone,” he says with a laugh.

It’s turning out to be a win-win for everyone. Garry’s farm is making money off the litter and Garry’s buyer – who also hauls grain from Tennessee down to Alabama – now saves himself an empty haul back by picking up litter at White Acres. Not to mention, the farmers up in Tennessee are getting some primo fertilizer.

Windrow works well
The remaining 20 percent of litter is used for bedding for the incoming chicks and for composting the dead birds.

After a majority of the litter as been removed, Garry’s son and grandson use a Windrow machine to handle what’s left in the house.

“We have an LVI windrow machine. When we run it through the barn, it piles the litter into two piles. The litter goes through a heat and then we repeat the process, putting it into one pile and letting it heat,” says Garry. “It really helps with getting the hard pan off the floor. It also helps keep the litter drier, and it removes pathogens and a lot of the ammonia as well.”

And the process, he says, takes about six days.

For those who are expecting the windrow to take care of all the ammonia, Garry says you should lower your expectation. “Some litter treatment is still required, but not as much.”

Once the litter is composted (or pasteurized), and spread out four to five inches as bedding, it is ready for the incoming chicks.

County water board assists farmers
The windrow system is ideal, says Garry, but unfortunately, it’s also expensive. The machine costs around $17,000 and requires a 70-horsepower tractor to pull it. This is a big expense for some farmers, especially for a piece of equipment that will be used four times a year.

To assist farmers who would like to use the system but can’t afford it, the St. Clair County Soil and Water Board purchased a windrow machine and leases it to farmers for $50 a house. Garry says this system is working well, and farmers just call in and schedule a time.

And for those farmers who don’t have the 70-horsepower tractor, Garry, who has a large tractor, makes himself available.

“We’ll go do it for them. They just pay us for our time.”

Composting
The litter remaining in the barn that isn’t used for bedding the barns is used for composting the dead birds.

“We layer the compost and the birds, and the process takes about 80 days,” says Garry.

Once the dead birds have been converted into an organic matter, that matter is spread on the farm’s approximately 100 acres of hay fields. The hay that is grown is then fed to the 75 head of registered Charolais cattle that the Staples family raises.

White Acres Farm is a CAFO and is required to take regular soil samples.

“We take soil tests every three years, but we aren’t concerned about phosphorus levels,” says Garry. “If we couldn’t sell 85 percent of our litter and had to spread it all, then it would be an issue.”

Testing
In addition to the acres of hay that they spread their litter on, Garry is looking at spreading litter on the 260 acres of timber they own.

He says one of the primary reasons he purchased the timberland was to help maintain the quail population that is losing its habitat.

But why stop there? Why not spread litter in the forest, thereby helping the farm dispose of the litter and, at the same time, helping both the quail and timber production.

Garry is selectively logging now, leaving space to run his tractor and preparing for future spreading.

This isn’t a new idea.

“Tree farms using litter have seen an increase as forests can absorb and retain relatively large amounts of the elements found in poultry litter without causing environmental problems. The University of Arkansas is doing studies to find the long-term effects,” wrote Janet Scharbor in The Change Agent.

Environmental award
The Staples family’s hard work and innovation was recognized this year when they received the 2013 U.S. Poultry and Egg Association’s Family Farm Environmental Excellence Award.

James Adams of Wenger Feeds, Rheems, Pa., and chairman of the association, describes the winners of this award: “[They are] poultry growers and producers that utilize best management practices that enhance environmental stewardship on their family-owned and -operated farms. The innovation, resourcefulness and dedication our award winners exhibit each year in pursuing excellent environmental management is exceptional.”

Taking change in stride
Receiving the award is great, but awards aren’t why the Staples family do what they do. They believe if you take care of the land, it takes care of you.

“We keep up the farm like we would a yard,” Garry says.

For example, they even maintain the 1,700-foot road in front of the farm, keeping it sprayed and clean.

If they see regulations or rules that will be going into effect, they’d rather be ahead of the curve than be one of those forced into it.

“I don’t mind, if it’s going to pay for itself,” says Garry.

One of the bigger changes they made recently was going from propane to natural gas. It took a little work, but it’s paying off big. The fuel savings he’s experiencing are in the neighborhood of 40 percent.

Future of farming
Garry says the poultry business can be tough, especially for contractors who are getting pushed toward costly changes. But it’s also satisfying. The Staples family enjoys its chickens and Garry’s happy he made the decision to “go poultry” 12 years ago.