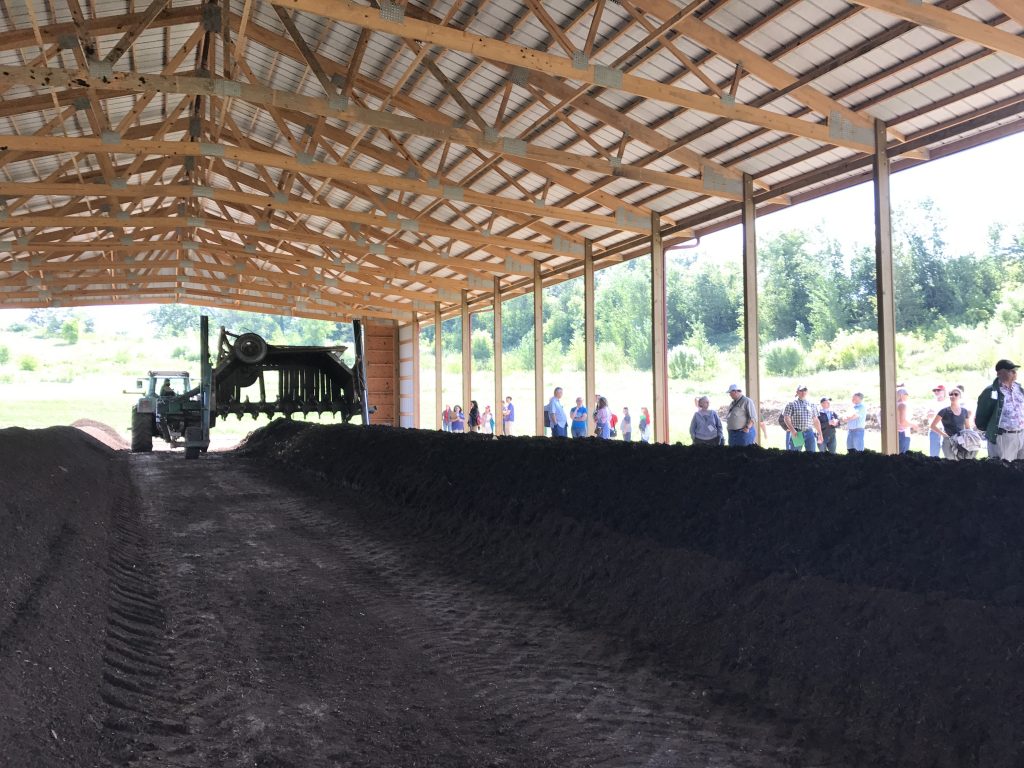 August 30, 2017, Waunakee, WI – After four years of experimenting with composting on his dairy farm near Waunakee, Jeff Endres believes “there’s a lot of upside to composting that we don’t know about yet.”

He told a large tour of attendees from the North American Manure Expo in nearby Arlington that the fertilizer value and bedding potential of compost are already apparent on his family’s Endres Berryridge Farm, operated with brothers Randy and Steve, but he is still learning about the energizing effect compost has on the soil.

One hint of that aspect of compost use is that his alfalfa acres that have been fertilized with compost for two years have out-yielded all other alfalfa fields. “It’s enough to notice,” he said. “That told me this isn’t hurting me. There’s something to it.”

He also noted that one problem they had before utilizing compost in their system is that steep alfalfa fields could not be fertilized with liquid manure and as such started to decline in fertility. Once they had the environmentally friendly, stable compost, they could feed those fields with it. They also found that applying compost to a growing crop didn’t harm the plants.”There are not a lot of barriers to composting,” he said. “No farmer is going to go into it as crazy as we did, but I got sick of digging holes in the ground to store manure. For us, this was a way to utilize the nutrients we already have in our farm system.

“I don’t think farmers should ever have to give nutrients away,” he said.

Two busloads of visitors from Manure Expo joined another busload of guests from the Madison Clean Lakes Alliance to visit the Endres farm on Aug. 22 and they asked some pointed questions of the compost experimenter.

He told them that he could probably build and use a liquid manure system more cheaply than operating his compost system. Just over a year ago the Endres family incorporated a large compost barn into a new set of buildings where they raise their dairy herd replacements.

Two identically sized barns (65 by 220 feet) house the farm’s heifer calves from four months to 13 months of age. Both barns feature tunnel ventilation and additional cooling fans which aid fly control; the air moving at 5 miles per hour keeps flies away. “The compost process, with the heat that is generated, is also very friendly to fly control,” he adds. READ MORE