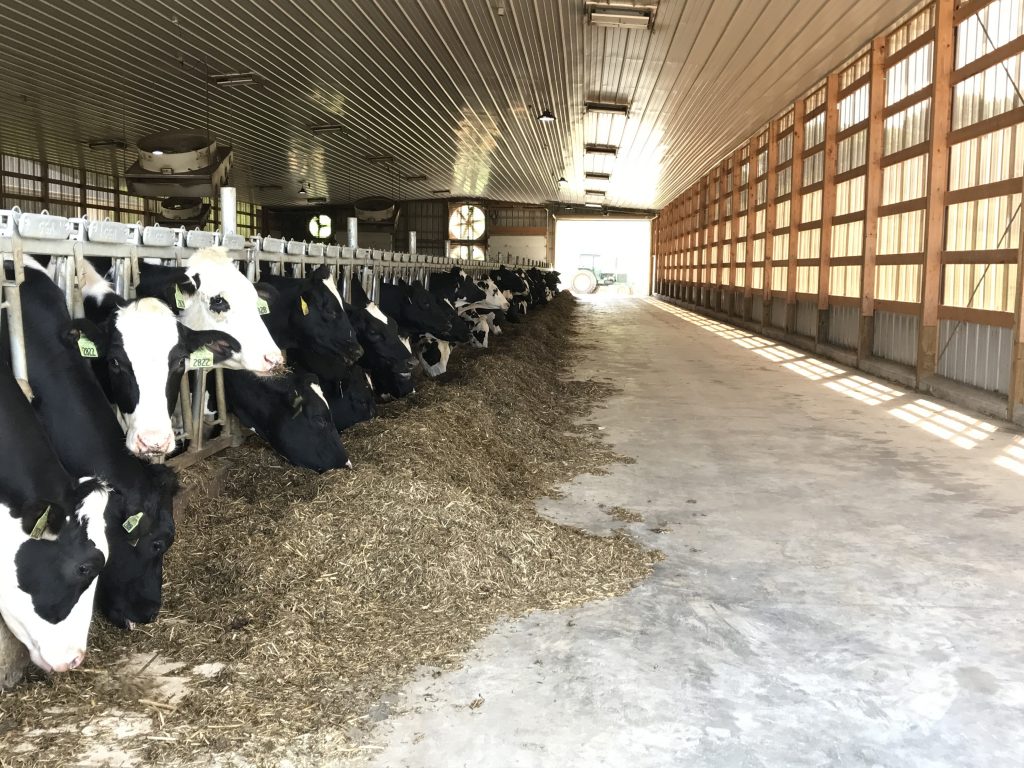 August 30, 2017, Ohio – When hay is harvested nutrients are removed from the field. A ton of alfalfa removes approximately 13 pounds of phosphorus (as P2O5) and 50 pounds of potash (as K2O). According to the National Agricultural Statistics Service, Ohio harvested 2.6 tons per acre of alfalfa in 2016.

Many hay fields are not pure alfalfa. The acidic soils of the southern and eastern parts of the state make it difficult to maintain an alfalfa or clover stand so a mixed stand of grass and alfalfa/clover is common. Stands in older fields are often just mostly grass. A grass hay crop will remove just as many nutrients per ton as an alfalfa crop. The big difference is that the annual yields from grass hay fields are usually about 1.3 tons per acre lower than alfalfa fields.

Livestock manure can be used as a fertilizer source to replace nutrients removed through hay harvest. Pen pack beef manure will contain approximately 7.9 pounds of nitrogen (mostly in the organic form), 4.4 pounds of phosphorus (P2O5) and 6.6 pounds of potash (K20) per ton according to OSU Extension bulletin 604. Note that these are older book values and your actual farm manure nutrient levels can vary depending upon the animal’s ration, the amount and type of bedding material used and how manure is stored and handled. The recommendation is to sample and test manure at least on a yearly basis. This will provide a more reliable indication of the actual nutrient content of the manure on your farm. For more information about how and when to sample manure, Penn State Extension has a good publication available on-line at http://extension.psu.edu/plants/nutrient-management/educational/manure-storage-and-handling/manure-sampling-for-nutrient-management-planning.

Let’s assume a livestock producer wants to use pen pack beef manure to replenish the nutrients in a hay field where he harvested three tons per acre of hay. Since alfalfa and grass hay both remove similar amounts of nutrients per ton, we can assume the three tons of hay removed per acre contained 39 pounds of P2O5 and 150 pounds of K2O. If pen pack beef manure was used to replenish these nutrients, 8.8 tons per acre would be sufficient to replace the phosphorus. However, a rate of 22.7 tons per acre would be needed to replace the potash. The 22.7 ton per acre manure application rate would result in almost 100 pounds of P2O5 being applied per acre, far more than was removed in the three tons of hay.

The key to using livestock manure to replace the nutrients removed through hay harvest is to get even distribution of the manure across the entire field. Having mowed hay fields as a teenager, where bedded pack manure was applied, I would strongly urge an even distribution pattern across the field. Avoid large clumps that will plug the mower or interfere with regrowth.

If you are unsure how many tons per acre your solid manure spreader applies there is a simple way to make a determination. Make a heavy plastic piece that is 56 inches by 56 inches. Fasten it to the ground with weights on the corners and apply manure across the plastic. Fold up the plastic and weigh the manure captured. Many people use a bathroom scales for this. One pound of manure captured on the plastic is equivalent to one ton of manure applied per acre. Thus, if you captured 10 pounds of manure the application rate was 10 tons per acre.

It is common for county extension offices to have farmers ask; “Can manure be applied between cuttings”? The answer is “yes”. Farmers commonly use liquid swine and liquid dairy manure between cuttings to replace soil nutrients and “boost” regrowth of the forage crop in northwest Ohio. There is the potential to damage the crowns of the forage plants but most farmers seem to like the results of the manure application. Solid manure could also be applied between cuttings instead of waiting until fall to apply the manure. The manure application should take place as some as the hay is baled.

Liquid beef manure is also being used to replace nutrients in hay fields. Liquid beef manure we have sampled has contained 40 pounds nitrogen (about half in the organic form and half in the ammonium form), 35 pounds of phosphorus (P2O5) and 30 pounds of potash (K20) per 1000 gallons of product. Applied with a drag hose, this can be an excellent fertilizer for a forage.

A final cautionary note regarding manure application to forage fields: If manure is coming from a herd with animals infected by Johne’s disease, that disease can be transmitted by manure to healthy cattle. According to a publication from the US Dairy Forage Research Center at Madison Wisconsin and authored by Michael Russelle and Bill Jokela, the Johne’s bacterium can survive on hay. Therefore, those authors’ recommendation is that in herds with Johne’s, manure should not be applied as a topdressing on fields that will be harvested as dry hay.