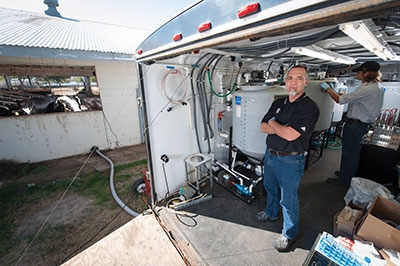 In some ways, it’s not. It’s clear and flexible like a piece of sandwich bag. Chemically, it’s similar to the plastics in everyday products like garbage bags or packaging material.

But unlike the usual petroleum-based plastics, this is made from cow manure.

Coats is an associate professor of civil engineering at the University of Idaho. His research team has developed a unique system to transform manure into polyhydroxyalkanoate, or PHA, a biodegradable plastic.

“We are the only research group looking to advance this technology in the United States,” Coats says.

The project is part of Coats’ overall goal to find valuable uses for municipal and agricultural waste streams – like the 250 million tons of manure America’s dairy cows produce every year.

“It’s all about developing better technologies that really move us forward in society in our use of organic waste,” he says.

A pilot-scale model of the manure-to-plastic system is now operating at the University of Idaho dairy. It can turn 10 to 12 gallons of wet manure into up to five pounds of plastic a day.

The system begins by fermenting the carbohydrate-rich manure, which produces organic acids including acetic acid – better known as vinegar. The acids become food for a tank full of naturally occurring soil bacteria, which Coats’ team harvests from the local wastewater treatment plant.

Like humans who store fat if they overeat, the bacteria store excess organic acids as PHA.

When the bacteria are killed and dried, the researchers can separate out the PHA, a crumbly, white, raw plastic.

With processing, PHA can be used in myriad products. Coats envisions it applied to single-use materials like packaging, as well as products for which biodegradability comes in handy, like planter pots or erosion-control mats.

PHA is currently produced on a small scale elsewhere, but it’s mostly made from corn sugar – meaning corn is diverted from the human and livestock food supply – and the process requires pure bacterial cultures, all of which creates a large carbon and energy footprint.

Coats’ system, on the other hand, leaves a relatively small carbon footprint, uses natural materials and relies on a resource farmers are happy to be rid of.

“The great thing about manure is it’s free,” Coats says with a laugh.

Cow manure also is abundant in Idaho, which is home to a $2.4 billion dairy industry. Coats works closely with the Idaho Dairymen’s Association, which has helped support the pilot system’s development along with the National Science Foundation, the U.S. Department of Agriculture, Idaho’s Center for Advanced Energy Studies and Idaho National Laboratory.

“I believe in the commitment of the land-grant university to serving industries in the region, so dairy fits that very well,” Coats says.

The manure-to-plastic system also can dovetail with anaerobic digesters, which convert manure to electricity and are rising in popularity in Idaho and beyond. Fermented manure can be split into solids and liquids, with the liquids used for plastic production and the solids used for electricity.

After Coats’ team collects data from the pilot system at the University of Idaho diary, they plan to move it to a dairy complex in southern Idaho and install it alongside a digester.

Coats’ system could apply to waste streams beyond dairy manure, too. His team is studying ways to make plastic from other animals’ manure, waste from tomato canneries and municipal wastewater.

Coats credits the University of Idaho’s support and his research team for the success – and exciting future – of his project.

“The university has provided me the opportunity to grow my own research program, to really identify the path I want to go down,” he says.

The research team includes Nick Guho, a doctoral student from Boise who has been working with Coats since he was an undergraduate and handles day-to-day operations of the pilot system.

“The project has provided me with real-life experience,” Guho says. “It’s provided me the opportunity to interact with an important industry.”

Coats’ other graduate students work to refine the manure-to-plastic system. Andrea Hanson, a doctoral student in biochemistry, investigates the mechanisms behind the bacteria’s ability to convert organic acids into plastic. Ben Watson, a master’s student in civil engineering, focuses on optimizing the system to improve efficiency.

A video of Erik Coats discussing his research can be found here: http://www.youtube.com/watch?v=_wyE7C_j0cs

Tara Roberts is a science and research writer with the University of Idaho’s communications and marketing department.