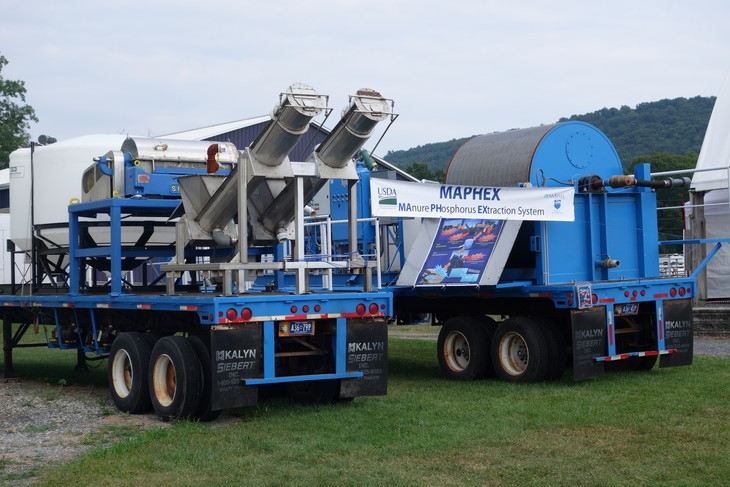 MAPHEX was designed to be a mobile system that fits on two large flatbed trailers to service a number of small- or medium-size dairies. If it is scaled up to have the capacity to treat manure from a large dairy, it would no longer be mobile. Hristov Research Group / Penn State

An innovation that could have a huge impact on water quality problems in the United States, a system capable of removing almost all phosphorus from stored livestock manure, was developed by a team of researchers from Penn State and the U.S. Department of Agriculture’s Agricultural Research Service.

Excess phosphorus, primarily in runoff from land application of manure, accounts for about 66 percent of impaired conditions of U.S. rivers and has created large areas of eutrophication — dead zones — in the Chesapeake Bay and the Gulf of Mexico, where aquatic life cannot survive.

Nutrient pollution is one of America’s most widespread, costly and challenging environmental problems, according to the Environmental Protection Agency.

The system devised by Penn State and USDA scientists — dubbed MAPHEX for MAnure PHosphorus EXtraction — involves a three-stage process, including liquid-solid separation with an auger press and centrifuge; chemical treatment with the addition of iron sulfate; and final filtration with diatomaceous earth. The machine is designed to process manure from manure-storage tanks or pits on dairy farms.

“This technology could be a game-changer if we can modify it to achieve lower operating costs,” said lead Penn State researcher Alex Hristov, professor of dairy nutrition in the College of Agricultural Sciences. “The final stage uses diatomaceous earth to filter phosphorous from the fluid and that material is expensive.”

As currently configured, the MAPHEX system would cost approximately $750 per dairy cow per year for a dairy operation — an unrealistic cost when EPA is not imposing restrictions on phosphorus runoff from farms and no government subsidies exist to pay for such technology.

But in the future, if the government enforces clean water regulations on agriculture and if

MAPHEX can be made more affordable to operate, its potential is enormous, Hristov believes.

“We anticipate that refinement of the process and beneficial uses of the solids removed from the manure — such as for plant bedding, compost and fertilizer — will improve cost-efficacy considerably,” he said. “And from a stewardship point of view, some larger farmers who can afford to may want to implement a system like this.”

Penn State and USDA, which were granted a joint patent on the system in 2017, are looking to license the technology, probably to a large agricultural or waste-processing company. They are not looking to enter into a business arrangement to produce the system, Hristov and Church noted.

Research on the MAPHEX system was conducted in central Pennsylvania, part of the Chesapeake Bay Watershed and an area with an intense focus on developing treatment systems for manure. Manure from the dairy sector was estimated in 2010 to account for 20 percent of all phosphorus in the Chesapeake Bay watershed.

Explaining why Pennsylvania was the perfect place to develop MAPHEX, Hristov pointed out that the majority of dairy farms in the study area are small, with fewer than 100 head of cows milked. But an increasing number of larger operations with more than 1,000 head can now be found.

“The liquid nature of most stored dairy manure reduces its potential for off-farm transport and was the impetus for developing treatment options to manipulate manure solids and nutrients,” Hristov said.

MAPHEX was designed to be a mobile system that fits on two large flatbed trailers to service a number of small- or medium-size dairies. If it is scaled up to have the capacity to treat manure from a large dairy, it would no longer be mobile.

“If the system is produced by an ag company, we think manure haulers can make a business out of it, a few small dairies could cooperate and buy one, or big dairies with thousands of cows can build a stationary system.”

The MAPHEX is not just for cow manure. Church said the technology is compatible with swine manure and it probably could work with chicken manure, too, but because the latter is dry, it would have to be diluted before the process could work.

A Chesapeake Stewardship Grant from the National Fish and Wildlife Foundation and a Research Applications for Innovation grant from the College of Agricultural Sciences in 2017 supported this work.