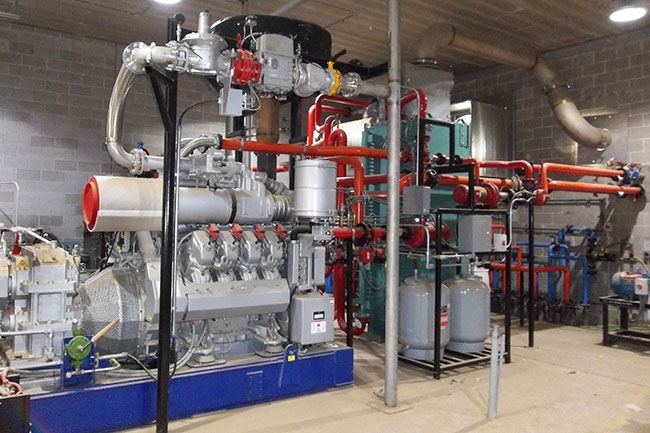 Most of the biogas produced from anaerobic digestion of barn waste at the Statz Bros. dairy is used as fuel in two power generators for sale or for on farm use. Contributed photo

Nutrient management plans are all but required on most large farms these days in the United States, which is why it is not so uncommon anymore for dairy farms with multiple locations to have more than one anaerobic digester to treat their raw manure.

A good example of that is the Statz Bros. Inc. dairy farm, located near Sun Prairie, Wisconsin. The family-owned dairy milks 4,000 cows on two sites. It also manages the manure generated by another 1,500 dry and replacement cows, housed on five smaller sites located in close proximity to the home site.

Mesophilic means that the digester works at a lower temperature of between 98 and 102 degrees Fahrenheit versus a thermophilic digester, which works in the range of about 120 to 140 degrees Fahrenheit. The material retention time in the Statz Bros. dairy digesters is about 20 days.

What occurs during the anaerobic digestion process is the production of biogas, and nutrient-rich liquid that also contains a certain percentage of largely benign solids. Bacteria working within this enclosed, oxygen-free environment are what produce the biogas and destroy many of the pathogens within the raw manure, while keeping the valuable organic nutrients intact.

It has become common practice by many dairies using digesters for manure management to separate the treated solids from the liquid stream, reusing them for bedding, which has brought about significant cost savings to the industry. The key is to ensure that the digester is working properly to create a benign form of treated digestate so that there is no impact on milk quality. This practice has also created an organic form of liquid fertilizer that reduces commercial fertilizer costs and has considerably less odor. The biogas produced by the bacteria rises to the top of the digester and can be used as fuel to generate power and/or heat. By using this manure management method, many dairies have also been able to make money selling carbon credits.

“We chose DVO because it is a simple and effective system,” says Troy Statz, one of three Statz Bros. dairy managing partners. He works primarily in the area of project development. Today, the managing partners of the dairy are Wes and Troy Statz and their cousin, Joe Statz.

“DVO’s mixed plug-flow design has been a proven system for us,” Troy says. “If you manage the fiber off the tail end correctly, that can be a great attribute. We see it in the health of the animals. They are very comfortable. It’s been a great part of the success at our dairy.”

The new digester site includes a commercialized nitrogen and sulfur capture system that, according to DVO Vice President Doug VanOrnum, the company is evaluating for application in a dairy environment. But DVO is keeping any further comment about it under wraps until the company is ready to bring a version of this technology to market for the dairy industry.

Most of the biogas produced from anaerobic digestion of barn waste at the Statz Bros. dairy is used as fuel in two power generators for sale or for on farm use.

DVO designed and constructed the digesters but they are owned and operated by the dairy, with several individuals playing a part to ensure that they function well.

Statz says that the nutrient management team is responsible to maintain consistent flow of the liquid manure to the digesters, monitor digester outflow to ensure that there is proper solid and liquid separation, and then organize timely land application of the liquid nutrients. Staff working at the farm shop keep an eye on such mechanical items as the engines running their biogas-fuelled power generators.

“You need to maintain proper residency time in the digester and separator maintenance is essential,” Troy says. “It’s not hard stuff, but it is stuff that needs to be done.”

Once the digestate exits the digesters, it undergoes a separation process through Bauer screw presses, leaving about three percent solids in the liquid stream and a pile of solids. The majority of the solids are used for bedding stalls and the remainder is land applied. There are a total of six screw presses between the two sites.

What’s interesting about the Statz operation is they use their recycled bedding material on a just-in-time basis. Stall maintenance occurs five to six days a week. The stalls are lightly groomed and a fresh layer of solids is applied to the bed. Statz says they do not hesitate to use the separated solids produced from their two digesters as fresh bedding. No composting is necessary. It has about 68 percent moisture content and they use the solids to bed all animals that have access to a free stall. They know that using the digestate solids this way works because the herd has stayed healthy and their somatic cell count (SCC) has remained steady at about 130,000.

“It’s not 100 percent pathogen reduced, but it is close to it,” Troy says. “Fresh digestate solids are used for stall bedding. Old solids inventory is stacked with other solid waste streams and land applied seasonally.”

Manure from the satellite dry and replacement cow barns is also scraped regularly and loaded for treatment in the digester at the home dairy site.

“That’s created an avenue for all that waste into one waste stream to produce bedding back for those non-lactating animals,” Troy says.

Runoff from the feed storage areas is also funneled into the digesters.

The digesters provide the dairy with multiple benefits, not the least of which is liquid organic nutrients in their lagoons for injection on their cropland. The lagoon liquids supply about 60 percent of their nitrogen fertilizer requirements. In addition to milking cows to supply milk to Dairy Farmers of America, the farm also manages about 5,800 acres of cropland consisting of corn, alfalfa, wheat and soybeans. There are a total of 6,600 acres within the Statz Nutrient Management Plan, with 800 acres in the plan included from neighboring landowners.

“We land apply liquid in spring, and then in summer on some alfalfa, after the wheat comes off, and then in fall after the silage, beans and grain are off,”
Troy says.

The biogas generated from the older digester on the home farm fuels a power generator, which produces about twice as much power as the dairy consumes. Renewable power production has been sold on contract for the past nine years to Alliant Energy. Statz Bros uses the biogas from their second digester primarily for their water boiler, to heat the digester, and ancillary needs at the dairy center and separation facility. During the months of the year when electrical demand is high, biogas is used to power a generator to offset demand from the utility. Excess biogas is flared and earns a carbon credit. Troy says the economics of selling the potential power this system could generate doesn’t make financial sense right now, which is why they have chosen to handle the biogas generated from the second digester in this way for the moment.

Statz says that using up to 70 percent of the treated solids generated by the digesters for bedding really makes a difference from a cow comfort standpoint and is a considerable savings to the dairy. In the past, they have used sand bedding, and then sawdust and rice hulls on mattresses before taking the treated solid digestate route with the completion of their first digester in 2009.

To land apply the liquid nutrients from their lagoons in spring, summer and fall, Statz Bros. dairy uses their own drag hose systems for land within two miles of the farms. The toolbar they use has a minimal disturbance shank where the liquid nutrients are placed in the soil opening behind the shank.

For cropland further away, nutrient application is handled by a custom manure application contractor. Statz describes the treated effluent in their lagoons as being more consistent in nutrient content compared to the raw liquid manure previously collected and land applied, and also easier to handle.

Established in the 1950s, the Statz Bros. dairy has grown significantly over the years, more than doubling in size from 300 to 800 cows in 1992. The farm continued to acquire nearby dairy farms and cows, along with renovating and expanding their second dairy in 2015, to reach today’s production level. Adding the new dairy increased the number of milk cows from 2,500 to 4,000.