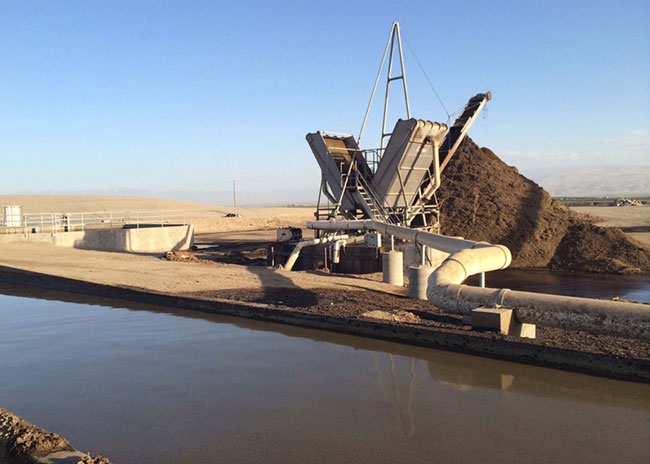 Before the manure water enters CalBio’s line and travels to the covered lagoon digester, it is put through a slope screen separator to remove solids that are then dried and used for bedding. Contributed photo

This February was the celebration of a great partnership of California dairies and California Bioenergy (CalBio).

The digester projects are just a start for what lies ahead for California dairies and renewable energy.

“On February 2nd, we commissioned three new dairy digesters,” Black says. “We are constructing three new digesters in the Kern cluster this year. These three new projects recently won grants from the California Department of Food and Agriculture. We plan on adding the other dairies in the cluster in the near future.”

The Kern Cluster includes 15 modern dairies southwest of Bakersfield. The first three projects will produce both electricity (roughly two-thirds) and inject the balance of the biogas into the pipeline for use as a vehicle fuel. The 12 future projects are planned for pipeline injection, with the biomethane being used as renewable compressed natural gas (R-CNG) in trucks and buses.

Most dairy farms in California move their manure with water, which eventually ends up in a lagoon. The lagoons are anaerobic environments that naturally break down the manure, but they also produce methane – a potential liability for California dairies, since they are being asked to reduce those methane emissions by 40 percent by 2030.

The CalBio digester projects provide an answer for farmers. They reduce methane emissions and at the same time provide a stream of revenue to the farm, explains Black.

The process is fairly straightforward. The manure water from each of the cluster’s dairies is diverted to a double-lined, covered digester.

“In the digester, we capture the biogas that now goes in the atmosphere. This biogas is approximately 60 percent methane,” says Black. “We then clean it. For electricity generation, it is scrubbed of hydrogen sulfide. For pipeline injection, it is cleaned to nearly pure methane. In addition to capturing the gas, we capture the manure water effluent coming out of the digester, which we hand back to the dairy to apply to its farmland for fertilization and irrigation, just as they do today.”

Black adds that the farmers are finding that the manure water coming out of the digester has advantages over open lagoon water.

“There are less solids since under the lagoon cover there is additional digestion,” he says. “Fewer solids improves its use in the irrigation system. We’re also finding an increased percentage of plant-available nitrogen, which helps improves its value to the farm. We’re at the early stages of learning and evaluating these findings, but the dairies are saying the water is more consistent and easier to use in farming operations.”

Before the manure water enters CalBio’s line and travels to the covered lagoon digester, CalBio puts it through a slope screen separator to remove solids that are put out in the hot California sun and then used for bedding.

“A separator either already exists on the dairy or we add that,” says Black. “We also add a sand lane, and take other steps to decrease sand and the buildup of sludge in the covered lagoon digester.

“Almost all the bedding at California dairies is a form of dried manure solids, whether it comes from a separator, a weeping wall or from a settling pond,” he adds. “For our digester projects, we put in place a slope screen separator. This adds consistency across the dairies and provides a controllable stream going into the digester. The separated solids become the bedding source for most of our partner dairies.”

CalBio has six clusters in development across the San Joaquin Valley in California and is working to develop more. Each cluster is a group of dairies that are near to each other and also near a pipeline. CalBio builds a covered lagoon digester at each dairy. It then moves the biogas from each dairy to a central location. At this one location, the biogas is upgraded to meet pipeline standards.

At San Joaquin Valley dairies, there are approximately 1.3 million milk cows. The close proximity of the farms to each other and a pipeline enable pipeline-to-fuel projects. Projects further from a pipeline are better suited for electricity generation.

The key to project success is sound economics, says Black. The California Department of Food and Agriculture provides valuable grant awards to dairy digester projects. CDFA’s funding comes from the California Climate Investments. This is “a statewide initiative that puts billions of cap-and-trade dollars to work reducing greenhouse gas emissions, while strengthening the economy and improving public health and the environment – particularly in disadvantaged communities,” according to the California government. The California Energy Commission has also provided grant funding, which offered initial investments in digester projects in the state.

The other key to economic success is ongoing revenue sources. For electricity generation, this comes from the BioMAT, a 250 MW bioenergy feed-in tariff program in California.

“The BioMAT is a must-take program in which the investor owned utility, based on which region you’re in, provides a contract to take the generated electricity at an economically acceptable price,” explains Black. “In addition, a digester projects generates revenue from carbon credits.

“The BioMAT is a 250 MW program,” he adds. “Ninety MW are for dairy and other agriculture. The balance of 160 MW is for other bioenergy feedstocks. A project can’t be more than three megawatts in size, and the three projects for the ribbon cutting are each one megawatt.”

Pipeline injection projects contract to sell the natural gas as vehicle fuel. For these projects, the key factors for success are the federal Renewable Fuel Standard RIN program and California’s Low Carbon Fuel Standard (LCFS) Program, developed and overseen by the Air Resources Board.

Before the manure water enters CalBio’s line and travels to the covered lagoon digester, it is put through a slope screen separator to remove solids that are then dried and used for bedding.

Black adds that when CalBio generates electricity, roughly 80 percent of the revenue comes from electricity sales and 20 percent comes from the carbon credit.

“The alternative is to clean it up and put it into the pipeline,” he says. “If you put it in the pipeline, you could sell that natural gas for use at a power plant somewhere else, because once it’s cleaned up and its natural gas, it’s chemically indistinguishable from what’s in the pipeline.”

The gas can also be sold as a vehicle fuel.

“When we generate vehicle fuel, a very small percentage of revenue actually comes from the value of natural gas,” Black says. “It’s about five percent in the market today. The balance of the value comes from the Federal RIN credit, initially developed for ethanol, and the LCFS credit, developed to reduce carbon emissions from the transportation sector.”

CalBio is also focused on expanding the use of the dairies’ biomethane in vehicles.

“It’s the responsibility of companies like ours to get the dairy methane into a California vehicle,” Black says. “We’re working together on the vehicle fuel side, seeking to expand the number of natural gas vehicles.”

The state of California encourages projects that create vehicle fuel because they don’t emit any NOx, and they actually help reduce NOx by using natural gas in trucks and buses instead of diesel.

He adds this doesn’t mean electric production isn’t important – and it is a great option for dairies not near pipelines. And there is significant headway being made in limiting NOx output from electric generation.

Using the dairy’s biogas as a vehicle fuel in California, although more profitable than electricity, is also a riskier investment.

“There are no long-term contracts. Also there aren’t many natural gas cars. The green cars of the future are mostly electric. But there are substantial buses and trucks that are currently or have the potential to convert to natural gas.”

Black is focused on the prospect of using dairy methane as a renewable resource in the Central Valley, because not only is it the home of the vast number of world class dairies, but the valley is a severe non-attainment zone (an area considered to have air quality worse than the National Ambient Air Quality Standards as defined in the Clean Air Act Amendments). Because the air gets trapped between the Coastal mountains and the Sierras, air pollution builds in the valley, and therefore, along with the LA Basin, it is more heavily regulated than any other part of the country.

In converting cow waste into a renewable resource, dairy farming considerations are one of CalBio’s highest priorities.

“We formed CalBio with a dairy farm partner,” Black says. “We also work very closely with 4Creeks, one of the leading engineering firms that helps build and design dairies. We have a great deal of expertise in how to help design and engineer covered lagoon digesters that work well and actually help enhance day-to-day dairy operations.“

CalBio’s goal is to create a partnership that allows dairy farmers to focus on producing milk, while they focus on developing new and efficient ways to capture dairy biogas and use the methane for energy generation, while maximizing the profitability of that gas. And, together, they share the profits.

When asked if he could look 10 years into the future, what would he like to see, Black responded, “I’d like to see that we’ve helped dairies benefit from this significant new revenue stream. We’ve also improved their manure management operations saving them money, and we’ve helped the dairies deliver on California’s environmental goals. I want us to look back and see that we had a win-win opportunity and that we were successful together.”