This pesky weed is no joke – and it might be hiding in manure.

Palmer amaranth is quickly becoming a problem in Canada and the U.S., and growers need to learn to recognize the weed in their fields. Photo courtesy of Tom Peters.

Palmer amaranth is a fast-growing weed that is spreading quickly across North America. According to Anthony Brusa, researcher with the department of agronomy and plant genetics at the University of Minnesota, this weed is native to the southwestern United States and northwestern Mexico, but has managed to spread throughout the southeastern part of the States, up through the Midwest and even as far north as Canada.

Not only is this weed spreading quickly, but it’s also difficult to control since it has developed a resistance to multiple classes of herbicides. Moreover, Palmer amaranth is a prolific seed producer, and can grow as fast as two to three inches per day.

“A single individual plant, if it manages to reach maturity, can produce somewhere in the area of a quarter of a million seeds or more,” explains Brusa. “So once it reaches seed, you have a big problem.”

Once Palmer amaranth matures, it can reach heights of between six and eight feet, thereby inhibiting crop growth. Brusa says crop yield losses are as high as 90 percent for corn and 80 percent for soybean in some states. He adds that Palmer amaranth affects other types of crops as well.

This pesky weed first appeared in Minnesota in the fall of 2016. Brusa was hired to help tackle the problem soon thereafter, and says that the best way to deal with this weed is with a three-pronged approach. The first is tracking and monitoring. “The Minnesota Department of Agriculture is extremely aggressive at tracking it down and monitoring the fields after it’s been discovered,” he says. “If it has reached seed, you have to monitor it for five years, because that’s the duration of it in the seed bank.”

Education is the second prong, and is very important, he adds, because growers need to be aware of the problem, and they need to be able to recognize Palmer amaranth when they see it in their fields. “Every sighting we’ve had has come from growers reporting it, so it’s extremely important that you get the people out there doing the work involved,” says Brusa.

The third prong is research, which includes genetic testing to help identify Palmer amaranth plants already growing in the field, as well as Palmer amaranth seeds that might be hiding in manure.

Doing so is critical to preventing the spread of contaminated manure.

Brusa explains that two types of genetic tests have been developed. One is used to identify the plant, while the other identifies the seed. “Palmer amaranth looks very similar to other amaranth species,” he says. “For the average person, who just sees it growing in their field, you don’t want to run the risk that you misidentify something. And sometimes, weeds growing out in the field don’t look like they do in a textbook. There’s always a little bit of a variation. So genetic testing of a plant leaf is one of the main ways that people have been using to identify Palmer.”

The seeds are extremely difficult to identify correctly, Brusa adds. “They’re about a millimetre in size. They basically look like poppy seeds, and they’re very, very hard to ID. So you take the seed, you mash it up, you get DNA out of it, and you run it through genetic tests. That’s the most reliable way to tell if you have Palmer.”

How Palmer amaranth spreads
Brusa says that this tiny seed spreads through feed, manure and even through agronomic seed. “You can take a subsample of any of these, and use genetic testing to determine if you have a problem,” he adds.

In Minnesota, agronomic seed has to be certified as “weed-free” before it can be sold, Brusa explains. “It must be certified as not having Palmer amaranth and it must have a genetic test to prove it,” he adds. “Every state is different, so you have to determine whether your state has these programs in place.”

Palmer amaranth can also spread through the sharing of heavy equipment, like combines. “If it’s not properly cleaned, you can have seed stuck in the machine, and then it spreads into a new field that way.”

Heavy machinery is very expensive, and not every grower can afford to have their own, adds Brusa. “So growers will lease it from companies, or from another grower, and sometimes Palmer amaranth can spread that way across multiple state lines. You can get very, very long-distance spread that way.”

Contaminated manure
Earlier this year, a research paper was published looking at how Palmer amaranth seeds can be recovered from manure in order to prevent the spread of this weed through land application.

The paper, entitled “Comparison of methods to recover amaranth weed seeds from manure,” explained that “if contaminated feed is suspected, detection tools are needed to test manure, but traditional methods are time consuming and often inconclusive.”

While the genetic tests explained by Brusa can help determine whether Palmer amaranth seeds are present in a subsample of manure, the paper explained: “Although new genetic seed testing is making detection easier, methods to separate seed from contaminated manure are needed.”

One of the authors of this study is Melissa Wilson, assistant professor and extension specialist, manure nutrient management and water quality, department of soil, water and climate at the University of Minnesota. Wilson and her team of researchers determined that “seed recovery was highest (more than 90 percent) with the rinse sieving method, regardless of manure type.” 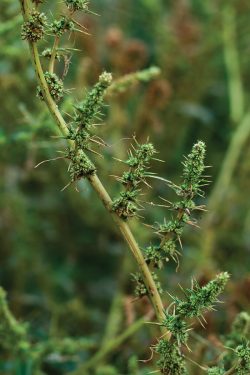 “Just as we can’t test all the manure that’s being spread for nutrient analysis, but instead we test small samples, we may have to use a similar approach when testing for Palmer amaranth,” explains Wilson. “There’s only so much you can do, however.”

Wilson says it could be possible to sieve large amounts of manure at a time. “There are commercial products where they are essentially sieving manure to separate the liquids and solids,” she says. “So if we get a small enough screen size into these liquid/solid separation systems, we may be able to recover the seed with the solids portion. Then the liquid would be uncontaminated and could be land applied.”

The solids that are left behind, in turn, “could be composted or treated in some way that would kill the Palmer amaranth seeds,” adds Wilson.

Before techniques are developed that will allow growers to filter large volumes of manure through a sieve on an industrial scale, Wilson recommends sticking with preventive measures, including avoiding any feed that might be contaminated with Palmer amaranth seed. “We’re really just starting to develop, or to think about how we’re addressing this [on a larger scale],” she adds. “So for now, the strategy is to stop it at the source, which means looking at your feed to make sure you’re not introducing any contaminated feed into your operation.”

Wilson notes that storing feed in a silo before using it can help “because it heats up in there and the heat can help reduce the viability of seeds.” She adds that composting solid manure can help for the same reason – the heat will impact the viability of the Palmer amaranth seeds.

Working with herbicides
If all fails, and Palmer amaranth still makes it into your fields and starts to grow, although it is resistant to herbicides, Brusa says you can still spray it if you catch it early enough. “You need to catch it when it’s about two to three inches. That’s the problem with herbicide application. The window of effective application for Palmer is pretty limited because of how quickly it grows.”

Ideally, however, Brusa says a team effort is necessary if we ever hope to eliminate the problem, or at least prevent Palmer amaranth from continuing to spread uncontrollably.

“Communication is really important,” Brusa says. “All of the control efforts in Minnesota, for example, have come about because growers reached out to the Department of Agriculture and everyone was willing to communicate.” •