University of Nebraska researchers are providing swine producers and veterinarians potential methods to manage and prevent the spread of Porcine Epidemic Diarrhea virus. 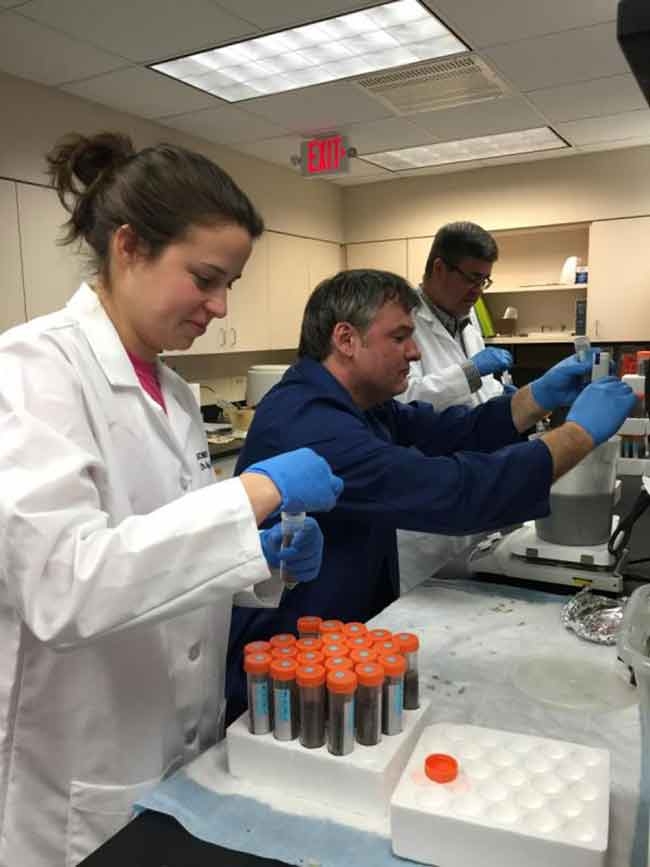 Beginning in the spring of 2013, a deadly virus spread quickly throughout the swine industry. Porcine Epidemic Diarrhea virus (PEDv) has been reported in more than 35 states and is estimated to have an annual economic impact of up to $1.8 billion. Research recently conducted by faculty at the University of Nebraska – Lincoln (UNL) is giving swine producers and veterinarians potential methods to manage and prevent the spread of PEDv.

PEDv is spread among pigs through the fecal to oral route. It causes severe diarrhea, vomiting and dehydration, typically less than one day following exposure. While older pigs will experience performance losses once infected with PEDv, the virus carries a nearly 100 percent mortality rate in pre-weaned piglets. The virus is highly virulent, which makes controlling its spread within and among swine operations particularly challenging. Veterinarians have speculated that a thimble-full of PEDv could effectively infect all of the state of Iowa’s nearly 20 million pigs, which is roughly one-third of the United States pig population.

“PEDv has a similar effect on older pigs as the stomach flu does on humans; they decrease feed intake, lose weight and are not productive,” says Amy Millmier Schmidt, assistant professor and livestock bioenvironmental engineer in the department of biological systems engineering at the University of Nebraska. “This loss of productivity equates to an economic loss for the industry as it takes longer for the animals to reach market weight.”

The National Pork Board and Nebraska Pork Producers Association are funding the research of Schmidt and a team at UNL and the U.S. Department of Agriculture’s (USDA) Agricultural Research Service. While previous research has looked at such aspects as disinfection practices for vehicles and equipment, developing a PEDv vaccine or evaluating swine feed as a source of infectious virus, this group focused their efforts on the environmental aspect of PEDv.

One area the group has been investigating is composting carcasses testing positive for PEDv. Burial is common practice with PEDv mortalities, which may be problematic because the virus thrives in cool, moist conditions. To test whether composting could eliminate the infectious virus, the researchers constructed three compost bins in which PEDv-positive pigs were composted in biosecure rooms on UNL’s East Campus. Sensors were placed inside the compost piles to monitor temperature and organic matter, and water was added to the bins, as needed, throughout two composting cycles. Testing of the compost material at the conclusion of the cycles found no evidence of PEDv.

“Properly handling and disposing of mortalities is a crucial step in reducing the risk of virus transmission,” Schmidt says. “We’re confident that composting is an effective method to dispose of on-farm mortalities and help limit the spread of PEDv when the piles are constructed and managed properly to achieve internal pile temperatures of 120 to 130 Fahrenheit.”

Schmidt and her colleagues also looked at adding lime to manure containing the PED virus to determine if a significant pH change in the manure would eliminate the infectious virus. Results revealed that treating manure with lime to raise the manure pH to 10 for at least one hour will eliminate infectious virus in the manure, though Schmidt suspects that a lower pH may be equally effective.

Testing during the past several months has revealed that this virus is extremely sensitive to pH, and researchers suspect that it may not be necessary to raise the manure pH all the way to 10 to inactivate the virus. However, they won’t be able to confirm this until additional experiments are completed.

Another area the team has been looking at is the survival of the virus in soil over the winter following fall manure application. Schmidt and her colleagues added PEDv-positive manure to tubes of soil at varying moisture contents and then stored these soil samples for 150 days in incubators where the temperature was adjusted daily to represent daily soil temperatures from November through April in southern Minnesota, northern Missouri and central Oklahoma. The team expects to share results of this project in peer-reviewed publications soon, but initial results indicate that the virus is quickly inactivated once manure is introduced into soil having a pH of 7.5 or greater.

As the quick and natural evolution of this virus progresses throughout the U.S., the positive results from this early research are encouraging. The next step for UNL researchers is to confirm their results with on-farm studies. They have received a grant from the USDA Agricultural Food and Research Initiative through the Critical Agricultural Research and Extension program to conduct a series of on-farm studies over the next three years. They will test multiple mitigative and preventative practices for PEDv to confirm the effectiveness of these biosecurity practices.

The team’s current focus is on demonstrating and promoting disease control and prevention measures on-farm and working with pork producers to create a culture of vigilant preparedness and prevention to minimize impacts of future disease outbreaks.

“All business decisions come down to economics so we want to demonstrate that the cost of investing in on-farm biosecurity practices is far less than the costs associated with lost productivity, decontamination, and remediation of a farm following a disease outbreak,” Schmidt says.

For more information on this research, contact Schmidt at 402-472-0877 or aschmidt@unl.edu.

Haley Steinkuhler is a writer with the University of Nebraska’s Institute of Agriculture and Natural Resources media team.