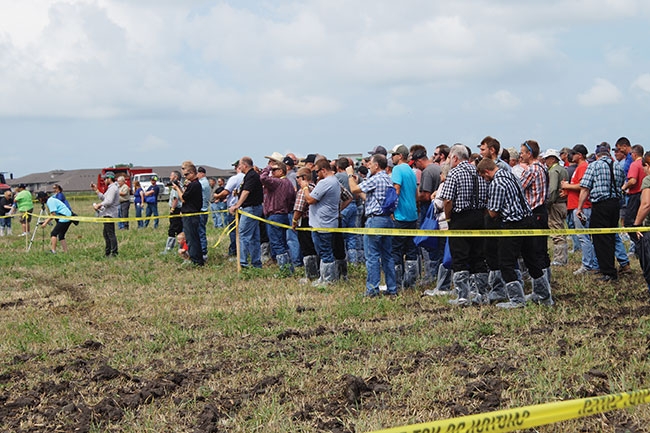 There was a mixture of hot temperatures, high humidity plus driving rain and wind. But the weather did little to dampen the enthusiasm of attendees at the 2018 North American Manure Expo.

About 1,300 people visited the Swiftel Center in Brookings, SD, over the two-day show in mid-August to see and learn the latest about manure management and application. Attendees from 25 U.S. states, four Canadian provinces plus Germany, the United Kingdom, Ireland, Australia and Russia took part.

In early afternoon, about 400 people gathered at Global Dairy, located near Estelline, to watch the agitation demonstration, featuring a boom truck, lagoon boats, and pumps from several equipment manufacturers. Jamesway, JT Boats, Puck Custom Enterprises [PCE], Nuhn and Bazooka Farmstar all had equipment on hand to observe in action. American Resources was also at the agitation demo showcasing its solid-liquid separation equipment while Pond Lift featured its lagoon aeration system at the Tekrony Dairy. Several volunteers around the lagoon used gas monitors supplied by Industrial Scientific to make sure the area stayed safe for attendees.

“We’d like to thank all the demonstrators, for sure, that were here today,” said Kevin Banken, who served as one of the master of ceremonies for the agitation demonstration. “Obviously this wouldn’t have been possible without them.”

Later in the afternoon, industry education sessions were held at the Swiftel Center, featuring PCE’s pump school, manure composting information from Vermeer, instructions on using nitrogen maximizers from Corteva Agriscience and a talk on how to turn manure into fertilizer, presented by Oxbo International.

The second day of the show started with a morning of 24 separate education sessions, divided into four different topics – manure basics, manure and the environment, manure on the job site, and manure and soil health. Each of the four conference rooms was at full capacity with 80 or more people attending each session.

With stormy weather on the horizon, expo planners pushed in-field demonstrations ahead 30 minutes for the afternoon. Solid spreaders from Bunning, Artex, Dutch Industries, Fliegl, Greenfield Spreading, Jaylor, Oxbo, Kuhn and Penta were all showcased. VTI, Zimmerman, Balzer and Dietrich demonstrated liquid toolbars while Bazooka Farmstar had its Titan Toolbar available for viewing in the field. Vermeer and Kooima Company were also on hand to demonstrate compost turners. Alliance Tire also had a display showing how tires can effect soil compaction.

The rain managed to hold off until most of the demonstrations were completed but many in the crowd broke out their ponchos, supplied by expo sponsors just in case.

More than 70 exhibitors took part in the trade show, which included equipment geared to both small and large manure management and application issues.

Also on display in the trade show this year was the Lil Stinker, a rat rod constructed by Bruce Bauer of Hastings, MN, using an antique solid manure spreader – a 1947 David Bradley – as a base. The attention-getting vehicle is also decorated with dozens of re-purposed antiques, including toilet seats, a cattle dehorner, a sewing machine treadle, chicken feeders, and horseshoes, just to name a few.

The 2019 North American Manure Expo is being held in Fair Oaks, Indiana, from July 31 to August 1.

“Indiana is one of the two states in the Midwest that hasn’t yet hosted the North American Manure Expo,” said Jiqin [JQ] Ni, a member of the 2019 planning committee and an associate professor of agricultural and biological engineering at Purdue University. “An expo in Indiana can fill one of the ‘gaps’ for the show and have an impact on thousands of livestock producers in Indiana and neighboring states.”

The 2019 expo will be based at Fair Oaks Farms, which is comprised of 11 family-owned dairy farms and one family-owned pig farm. The farms are located on 33,000 acres and have about 37,000 dairy cows and 2,700 pigs. The operation recycles all of its manure to produce biogas to power the farm and its fleet of milk delivery trucks.

“Manure management, application and utilization is among top environmental issues in Indiana, which produces large quantities of livestock and poultry manure,” said Ni. “This equals approximately 9.5 million tons each year, the equivalent to about 1.5 tons per Indiana resident per year.”