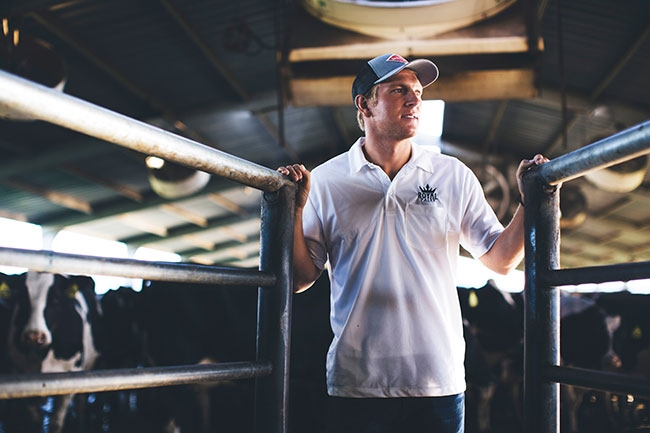 Washington dairy owner, Austin Allred, operated a pilot version of the BioFiltro wastewater treatment system for two years before investing a couple million dollars to construct an industrial-sized version that is meeting his expectations. Contributed photo

Earthworms eat biological material in the soil to survive. Now, their abilities are being put to work by a company called BioFiltro. They are used in a controlled environment to clean liquid manure waste streams in a matter of hours where it would otherwise have taken weeks.

The result is not only faster water treatment but also significantly reduced concentrations of nutrients like nitrogen, phosphorus and potassium, meaning that farmers using the system need a lot less farmland to dispose of their treated liquid waste. The rapid treatment process also mitigates emissions of problematic greenhouse gases (GHGs) like methane.

This wastewater treatment method offers a massive opportunity for large farms facing onerous transportation costs to transport nutrient-rich effluent from their lagoons for land application. It also opens the door to potential major expansion in milk production if farms can apply a lot more water on the same land base without worrying about over applying nutrients.

With this removal method, there is also a significant GHG emissions benefit, as it not only takes trucks off the road, but also treats water as soon as it flows out of the barn, thereby avoiding methane emissions from untreated water standing in facultative lagoons.

The bottom line is that many farms generating liquid manure now have another option to dispose of their liquid waste besides land application and anaerobic digestion. Biofiltration has arrived in North America.

BioFiltro’s system, called BIDA for biodynamic aerobic system, was originally developed by researchers in Chile and has been sold commercially for a couple of decades throughout the world in a variety of applications. The technology was incorporated under the company name, BioFiltro, in 2009.

“The best thing about our system is that it is natural,” says Mai Ann Healy, business development manager for BioFiltro, which was established in North America in 2013 with offices in Davis and Fresno, California. “It’s not finicky and it loves dairy nutrients. At the end of the day, we are using these nutrients, generated by cows, to feed more animals, in this case, microbes and bacteria to earthworms. It’s that simple.”

She adds that the BioFiltro system embodies the importance of going back to our roots and discovering a pre-existing solution.

“People often say that we are kind of a new company and we answer, yes, that’s true, but we are using a technology that is billions of years old that is tried and proven by Mother Nature,” she says. “At the end of the day, all BioFiltro did was look at the ground and ask what Mother Nature has perfected and how can we make it just a little bit better.”

The system is an easier sell to farmers, she says, because they understand the value and use of earthworms and microbes in soil.

While operating a pilot 5,000-gallon per day BIDA system for two years, Austin was able to consistently achieve 93 percent nitrogen removal, 90 percent phosphorus removal, and 97 percent removal of total suspended solids. In implementing the full-scale system, Royal Dairy has had to undergo improvement to their solid separation process upstream of the BIDA system to optimize the whole water treatment solution and its performance. Allred expects that with some planned solid separation improvements, the BIDA system will achieve better results closer to the pilot system, although he is happy with the commercial system as it stands. He recommends it for other farms that generate nutrient-rich liquid effluent waste streams and are challenged by costs and space for liquid waste disposal.

Allred says the dairy is currently saving at least $300,000 annually on trucking costs alone because of their BIDA system. With a couple of million dollars invested into it, he expects the system will pay for itself in about five years.

Also, because so much of the nutrients and suspended solids have been removed, they are able to divert and recycle a portion of their treated water back into their dairy flush system, with the rest continuing on to their lagoon storage facility. The lagoon is now emptied using a sprinkler irrigation system instead of trucks.

Royal Dairy was established in 2001 and is located in the middle of Washington, about two hours from Spokane. It is among the largest dairies in Washington. Allred says that he is considering further expansion.

“There are a lot of different doors that are open now for us that weren’t open before this installation,” he says.

Faced with a liquid waste disposal issue, he considered anaerobic digestion to treat his raw effluent, but it didn’t solve his problem, which was to reduce the amount of nutrients in the waste stream so that he could apply more treated waste water on less farmland. Also, the cost of power in his area of Washington is cheap, so generating biogas from a digester and using it as fuel to produce power didn’t make economic sense.

Allred learned about BioFiltro’s BIDA system while attending the World Ag Expo in California. It piqued his interest but he was concerned about being the first dairy installation in North America. That is why he first agreed to the two-year pilot project to become familiar with the system and to ensure that it would work as advertised.

The size of each commercial-scale BIDA system is determined by the size of the dairy herd, daily wastewater discharge volume, and the amount of nutrient that needs to be removed from the effluent stream. In the case of Royal Dairy, which has a herd of 5,000 milk cows and daily discharge of about 200,000 gallons of waste water, the BIDA system covers 81,000 square feet, or a couple of acres.

Washington dairy owner, Austin Allred, operated a pilot version of the BioFiltro wastewater treatment system for two years before investing a couple million dollars to construct an industrial-sized version that is meeting his expectations.

Here is how the BIDA system works.

The entire installation is enclosed within a containment structure, which can consist of concrete or steel. In one of its current projects, BioFiltro is investigating the possibility of converting a lined storage lagoon into a BIDA system, which could substantially reduce installation costs. As part of the operations process, a network of sensors and control panels are installed so BioFiltro can remotely track the system’s performance and water quality parameters. The company can make adjustments to system loadings over the Internet to guarantee optimum performance.

The liquid effluent stream is first treated through a solid separator to bring total suspended solid content to the target level of 2,000 milligrams per liter. Royal Dairy is composting the solids generated at this point and reusing it as bedding or selling it. BioFiltro tries to work with the pre-existing solid separation system at dairies, so long as it can consistently deliver effluent outflow to the level required for the BIDA system to work properly, or they will recommend an upgrade.

After separation, the nutrient-rich waste stream is then conveyed to an equalization tank where sensors monitor constituents such as pH and flow. An automated irrigation system disperses wastewater across the entire surface of the BIDA system. Gravity pulls the water through layers of wood shavings, river cobble and drainage basins before the final discharge. BioFiltro says that during the rapid four-hour process, the bioreactor is virtually odorless and requires minimum storage capacity.

As part of the installation, an industry-specific mix of worms and bacteria are added to the wood shavings media. These are naturally-occurring, local species of earthworms. The burrowing worms create air channels, digest suspended solids and achieve densities of 12,000 worms per cubic yard while working symbiotically with bacteria to create a biofilm. This biofilm is what captures and digests the contaminants from the liquid waste.

Over time, the earthworms produce castings that they then push to the surface. The top foot of the installation is excavated about every year and a half for a dairy to harvest these high-value castings, which are sold as a soil amendment. Royal Dairy intends to do just that as an income generator.

BioFiltro offers three levels of system installation, management and maintenance options. With the first option, they provide the engineering, design, project management, biological material and monitoring equipment while the dairy does the actual construction. After construction, they provide a basic maintenance package. This is the option that Royal Dairy chose. They are paying BioFiltro an annual maintenance fee for the next few years where BioFiltro provides remote monitoring, water testing, onsite maintenance and repair, and other items.

The second option is what BioFiltro calls build, operate and transfer, where BioFiltro builds it, makes sure it is running properly, then transfers it to the farmer with a basic maintenance package included.

The third option, which might be described as the Cadillac option, is where BioFiltro offers wastewater treatment as a service. In this instance, the client pays nothing up front, BioFiltro will install and operate the system, and the farm will simply pay a monthly fee, like a utility bill, based on rate per gallon treated, with performance guarantees, equipment repairs and replacement, etc. This includes a maintenance person on site.

Biofiltro has completed another dairy installation in California and has another two projects planned in both Washington and California. Worldwide, they have installed eight dairy farm systems and more than 140 systems for industries such as wineries, food processors, slaughterhouses and rural communities.

Healey emphasizes that the system not only works for dairy, but for any farm or business generating a biological liquid waste stream.