Why is the swine industry slow to incorporate anaerobic digestion? 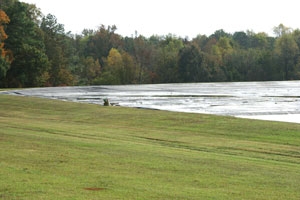 In order to incorporate a digester into a deep pit manure management system, some hog producers have used the deep pit as an initial collection area before pumping the manure into the anaerobic digester. They then built a separate external storage facility for the digested effluent.

Think of an anaerobic digester. Imagine the raised tank, covered lagoon or buried vessel. Where would it be located? Near a hog operation or a dairy? If you answered dairy, based on today’s statistics, you would probably be right.

According to data from the United States Department of Environmental Protection (EPA) AgSTAR program, more than 150 anaerobic digesters are currently operating on farms across the United States and dozens more are in the planning and construction stages. Of those currently in operation, more than 80 percent are based on dairy farms.

“If we take a look at the number of digesters, right now probably 15 percent of U.S. manure digesters are on a swine system,” explains Dr. Robert Burns, current assistant dean of Extension with the University of Tennessee and past professor of agricultural and biosystems engineering at Iowa State University. “We’re not penetrating that market very far. We’re less than one half percent of the total swine manure.”

“We have the potential to be as large as the dairy in anaerobic digestion but our penetration is very, very small: less than one percent,” says Dr. Burns. “Why have we seen far more digesters go in on dairies and fewer digesters on swine systems?”

He attempted to answer that question during the 2010 AgSTAR Conference, held last year in Green Bay, Wis.

While issues such as low energy prices, high capital investment, low return on investment and lack of a well-established support system in the swine-based anaerobic digester industry are all factors contributing to hog producers not embracing anaerobic digestion technology, Dr. Burns believes one of the key challenges is traditional hog barn design, particularly in swine finishing operations, “the segment that’s not really in the game of anaerobic digestion right now.”

In a typical Midwestern U.S. swine finishing barn, somewhere between 1,000 and 1,200 head of pigs are raised per barn on a slatted floor system above a deep pit storage facility, usually about eight feet in depth, explains Dr. Burns.

“This is different from a dairy system where we have an external manure storage system and we either pump or gravity feed the manure into that system. We have the opportunity there to add a digester as a processing step on that dairy. We have existing external storage to hold that digested effluent.

“In [the deep pit system], we have a challenge because there is no external storage. Our storage is underneath these animals.”

In order to incorporate a digester into a deep pit manure management system, some hog producers have used the deep pit as an initial collection area before pumping the manure into the anaerobic digester. They then built a separate external storage facility for the digested effluent.

“This makes it far more capital intensive to bring deep pit systems into the anaerobic digestion system because now, not only do you have to build a digester, you also have to build this external storage pit,” says Dr. Burns.

But recent happenings within the swine industry have led him to believe that some deep pits are already functioning as anaerobic digesters. Over the past few years, dozens of swine operations across the Midwest have experienced flash fires and explosions, apparently connected to foaming issues occurring in the deep pits.

Researchers at Land Grant Universities in the Midwest have started to investigate the issue.

“[It’s been] determined it’s a biological foam in nature but when we go and sample the air that is trapped in that foam, we found out it was 70 percent methane,” explains Dr. Burns. “It’s biogas.
“We have deep pits that are functioning as digesters and I think they always have, to some degree.”

Instead of venting the methane through the use of ventilation, as has traditionally been done in a deep pit system, the biological foam has been trapping the biogas and retaining it within the pit.

“The common scenario is that something breaks the foam – you’re washing the building, you get feed spilled through the slats – and when the ventilation fans pull [up the gas] and reduce that 70 percent methane down between the lower explosive limit and the upper explosive limit – somewhere between five and 15 percent in air – and move it by a heater in the building with an open flame, we have an ignition source and we end up with an explosion and a flash fire.”

Swine groups across the Midwest have been working to control the dangerous issue, but Dr. Burns has taken on “a completely different vision.

“I certainly want to think about how we control these fires but instead of thinking about how we stop the methane production, I’d like to think about how do we capture this methane,” he says. “Perhaps we’re not looking at this in the right direction. Perhaps we have mini digesters all over the Midwest and perhaps there’s an opportunity to capture this methane and use it for renewable energy and to sell carbon credits.”

He is challenging researchers, manufacturers and others involved in the swine industry to think about how the swine finishing operation sector can move toward integrating anaerobic digestion on their operations.

“How do we put digesters on these deep pit operations considering the fact those deep pits themselves might already be functioning in some degree as digesters?” he asks.

There has been discussion around creating some form of membrane to cover the deep pit under the barns slats. “The trick is how do we collect the gas and still allow the manure that’s dropped from the slats above to get into that deep pit?” asks Dr. Burns. “It could open a big market.

“If you look at a state specifically like Iowa, where we’re number one in swine production and we finish 30 million pigs a year, we currently have one swine digester in the state. There’s certainly a tremendous market there to be tapped if we can figure out how to do it in a smart way.”

Related
In the news: Janaury-February 2011
In the news: September-October 2011
University of Missouri digester generates energy, reduces odors
In the news: March-April 2011
Tags