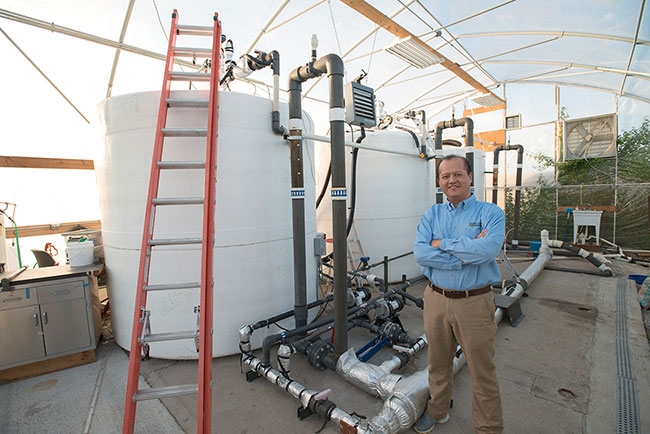 A flame flares from a torch near a greenhouse. It’s not there for light; it’s biogas from the anaerobic digester within the greenhouse.

The University of Missouri has built a small-scale anaerobic digestion system to produce biogas from pig manure.

“What we want to do is improve and fully utilize all the biogas for energy production,” says Teng Lim, University of Missouri associate extension professor of agricultural systems management. The burning torch is part of a system to flare off excess biogas.

Funded by the university’s College of Agriculture, Food and Natural Resources, the anaerobic digester consists of three tanks. Manure from the hog barn is stored and mixed in one tank. The other two tanks are where the anaerobic digestion takes place. Bacteria break down the manure in these warm and oxygen-free tanks, creating biogas.

Biogas from manure can be used to generate electricity and heat water. With some further treatment, it can also be stored as a compressed natural gas for heating or even vehicle fuel.

Lim says a larger digester could supply a farm’s energy needs and even provide power to be sold to the grid to provide electricity to the community.

The digested manure is a good fertilizer, and the process produces significantly less odor than traditional means of dealing with pig manure.

“There is still going to be odor,” Lim says, “but it’s going to be much lower and with less fluctuation than the raw manure.”

Lim says industry leaders and scientists believe anaerobic digesters will play a major role on farms in the future, both to mitigate odor and to generate renewable energy. But the price tag is a major obstacle. In a commercial setting, the digester would be 100 times larger than the one at the MU swine farm. The cost can run hundreds of thousands dollars. Currently, fewer than 20 hog farms in the U.S. have anaerobic digesters.

University of Missouri researchers are using the scaled-down digester to find ways to make digesters more affordable and easier to manage. The team has been working closely with industry experts from Martin Machinery, a Missouri company that specializes in biogas generators and control systems. They are also using it as an education tool to show producers the potential and what it takes to process the manure, and to train people how to properly run systems like this.