Features
Getting back to basics

Making decisions for manure management, storage and application after a wet harvest. 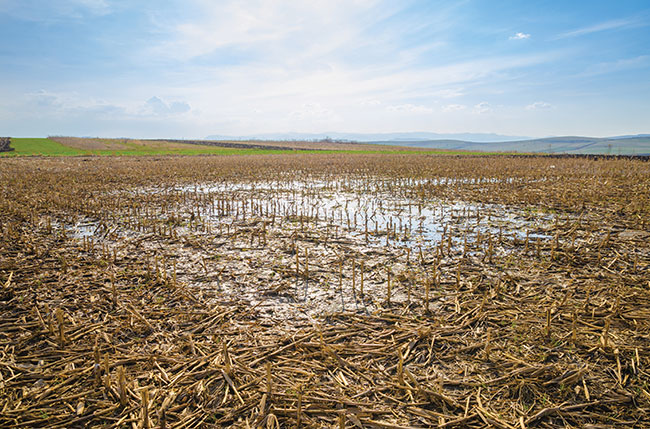 Both 2018 and 2019 presented challenging conditions with extra moisture in many areas, causing delays to both harvest and manure application. Photo credit: © alexionas / Adobe Stock.

During wet years, livestock manure application can be a challenging enterprise: depending on the rotation, there can be limited opportunities to apply during the growing season. If harvest is wet, many producers are forced to store manure for weeks or even months.

In some U.S. states winter application is outright banned, but the practice isn’t recommended anywhere in North America, says Chryseis Modderman, a manure nutrient management extension educator for the University of Minnesota. The risks of runoff and pollution are too high, and vast quantities of added nitrogen – up to half – could be lost.

In general, she adds, when a manure pit is at risk of overflow or breach, it’s better to land-apply the manure than let it breach, as pollution from a large manure spill is typically greater than that from land application if the application site is well-chosen.

Harvests in 2018 and 2019 were challenging for much of Minnesota, she says, with near-constant rain and land so wet that, even if producers managed to get the crop off, there was no way a heavy manure tanker could be driven into the field.

“I saw some folks making deep ruts in wet fields this fall in a desperate attempt to get manure spread. There are real soil health consequences to ‘mudding it in,’ like increased compaction,” Modderman says.

But a growing body of research shows risks of winter application, from nutrient loading in water bodies to pathogen and antimicrobial loss, according to a literature review authored by Steven Safferman, an associate professor at Michigan State University.

Christine Brown, field crop sustainability specialist for the Ontario Ministry of Agriculture, Food and Rural Affairs (OMAFRA), says that due to logistics, it used to be common for Ontario producers and commercial applicators to spread manure in the winter, but the practice is losing favor with growing awareness of eutrophication problems in Lake Erie. But even if the numbers are down, there are still too many producers winter-applying, she says.

With 2018 and 2019 weather and late harvest conditions in Ontario similar to those in Minnesota, early January saw many producers surface-applying manure; however, the second weekend of the month saw more than 2.5 inches (65 millimeters) of rain in 24 hours in some areas – breaking a record for precipitation set in the 1800s.

“There was an awful lot of surface-applied manure in the last few weeks, and needless to say those nutrients are no longer located where they were spread,” says Brown. 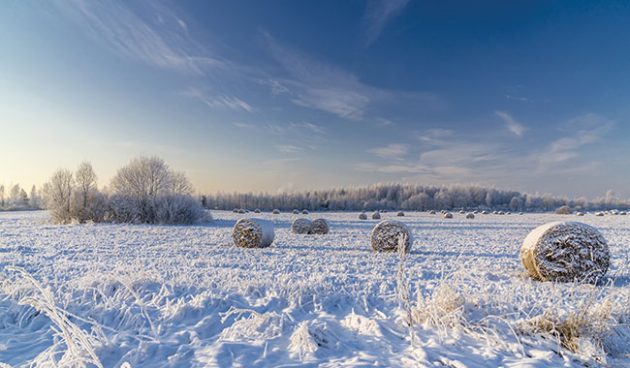 Winter application of manure can be a factor to nutrient runoff in water.

Decision support tools
Brown says the most important approach to minimizing runoff issues is to plan well in advance, identifying application opportunities during the year and making them part of long-term planning – for example, by choosing crops that facilitate late-summer applications.

But the biggest factor, she says, is how much the manure is valued by users: if it’s valued, it’s more likely to be applied at the right time and in the right place. “There’s been more emphasis on the soil health aspects of manure, and that’s increased the value and [improved] how people treat manure,” she says.

Brown recommends producers get full manure analyses done so they understand the resource. OMAFRA has just released their AgriSuite Organic Amendment Tool, which lists available nutrients after application and places a dollar value on the manure. By spring the resource should also include a phosphorus risk assessment tool, she says.

In the U.S., the states of Wisconsin, Michigan, Minnesota and Ohio have partnered with several federal agencies and educational institutions to develop a suite of decision support tools for manure application, says Heather Johnson, a senior hydrologist for the Minnesota Department of Agriculture (MDA).

Minnesota’s Runoff Risk Advisory Forecast (RRAF) system was designed to help farmers and applicators determine the best times to apply manure, and has been in use since 2018.

“With the higher than normal precipitation around the state in 2019, most days the RRAF map was in alert status,” Johnson says.

In Canada, there are best practices for manure application in all seasons, but there are regulations, too. On farms that are regulated under the Nutrient Management Act, manure applications from December to the end of March are prohibited, unless they can be incorporated immediately or are applied to a living crop. Even farms that are not regulated can be fined if pollution events occur.

Brown says anyone handling manure should know which regulations apply on a farm or in a region, have contingency planning in place for storage and spills, and keep the Spills Action number at hand.

Timing matters
As research builds on the risks of applying manure in the winter, education initiatives are picking up steam.

In Ontario, the Timing Matters initiative, a partnership between OMAFRA and industry organizations focused on promoting better application management planning, began as a pilot program in 2017.

Timing Matters’ Peer to Peer Response Team aims to raise awareness and educate farmers and applicators about the risks of late winter application, says Bruce Kelly, program manager for Farm and Food Care Ontario, which provided secretariat for the program.

Kelly says the project aims to spread the word about the risks of runoff in all seasons, but particularly in late winter, by which time ‘concrete frosts’ have developed.

“After we go through a few freeze-thaw-soak cycles, all of the air spaces in the soil get filled with water and freeze, and at that point our soils are essentially concrete – they’re impermeable,” Kelly says. “After we get rain events in February, our soils are no different than urban hardscapes.

“The practice of winter spreading comes under the microscope as a contributor to runoff,” he adds.

The Peer to Peer program conducted a survey two years running, asking farmers why they spread when they did. The December group responded that, due to wet conditions, they couldn’t spread in the fall and waited until favorable opportunities arose late in the year. Over the last two years, says Kelly, there have been seven- to 10-day windows in December that weren’t bad for application, but this isn’t a given.

Kelly says his response to these farmers was to give them another ball to juggle: “If it were all about compaction, winter application would be reasonable, but in the spring, with rain events those nutrients are likely to run off,” he says. “You’ve lost the value of those nutrients and you may have contributed to eutrophication potential.”

“We want farmers to appreciate and understand the value of manure for its nutrients,” he says. “Planning to apply manure at less risky times is a 12-month process: a combination of having enough storage and having the right equipment, so you can take advantage of your manure and get the maximum economic value out of it.”

A positive development in Ontario has been increasing interest in manure brokerage, says Kelly. The most elegant solution to phosphorus (P) loading is to move excess phosphorus to locations that are P-deficient, or in other words from livestock operations to cropping operations.

Making manure agreements well in advance helps put “liquid gold” where – and when – it’s most needed. •