Fort Hill Farms in Thompson, Conn. has made big investments in progressive infrastructure. 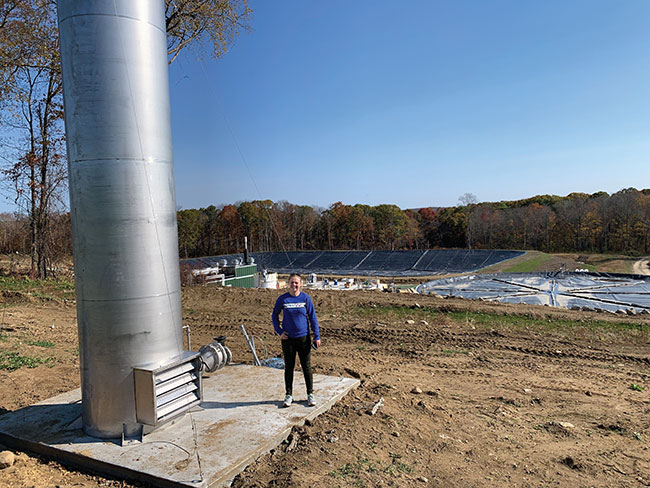 They’re the classic values one might expect from a fourth-generation farm – a deep and tender care for one’s animals, a steadfast commitment to supporting local, circular economics and an up-with-the-sun work ethic. But Orr, who took ownership of the farm in 2018, is also steering Fort Hill Farms into the 2020’s with a progressive vision – think agro-tourism, microgrids and even some robots.

At the centre of it all is a forward-thinking manure management strategy, one that involves national conservation bodies and the input of environmental scientists. More than keeping the world green, it also brings in the green – allowing Fort Hill to not just function for the future, but also flourish.

Manure Manager caught up with Orr on a busy day between her morning milking and afternoon classes to discuss the various hats she wears – and what it takes to build a farm of the future.

Family matters
In the early 2010s, Orr was attending SUNY Cobleskill College of Agriculture and Technology, just a short drive away from the family farm in Thompson, CT. It was there where she met her now-fiancé, Jared LaVack. At the time, the farm was still run by Orr’s father, Peter Orr, while her mother, Kristin, was the mastermind behind not only the Fort Hill Farms Gardens, but also the on-site creamery and ice cream stand. Throughout his career, Peter Orr was heavily involved in advocacy for Connecticut dairy as a member of the Farmer’s Cow co-op’s sustainability committee, a member of the Connecticut governor’s dairy council, milk promotion board and milk regulation board.

The property, spanning more than 1,000 acres is located in the northeast corner of Connecticut. It’s been a largely diversified operation since the 90s, Orr says. The creamery has been around since her own childhood – and her mother’s home-grown lavender has helped create a signature lavender ice cream that tourists love. Pick-your-own pumpkins, a seven-acre corn maze, fitness classes, energy walks and botany walks also draw a crowd.

“We’re all about tourism and asking, how do we reach back to the community? The ice cream was a big part of that effort – it was part of teaching [the community] what agriculture is.”

When Peter died in 2018, Orr, holding a degree in agricultural business, assumed the position as proprietor and general manager, with a focus on the day-to-day operations, including farming, outreach and edcation (Orr’s specialty) and retail operations (LeVack’s specialty).

Finally, her uncle, Jim Orr, runs the finance and business operations of Fort Hill – which, these days, is a particularly heavy job. There’s the livestock – of its cows, 200 are for milking, and they’re used for the production of both Cabot Cheese and Farmer’s Cow Ice Cream. Then there’s the various agro-tourism ventures. But beyond that, Fort Hill is undertaking some big projects that will allow it to take its manure management, as well as its livestock operations, to the next level. 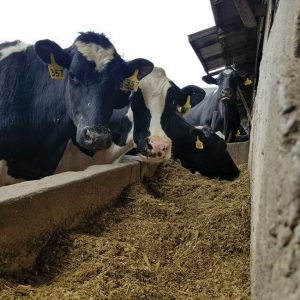 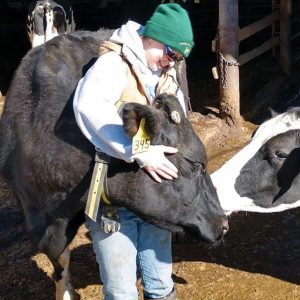 The fuel behind the farm
Orr says that for years, others have remarked on how much energy she and her mother both have, and wondering where she gets it all. Indeed, running a farm the size and scope of Fort Hill takes a great deal of energy.

The good news is, Orr says, it produces energy too.

“Sustainability really is the key word nowadays, and this allows us to meet that standard and also diversify that much more. We knew we needed to do something else with our manure, and this was the best way to do it.”

The 500 cows on the farm, fed a diet of haylage and corn silage, produce an estimated 22 tons of manure per day – around 8,000 in a year. It results in a mass amount of water use – the wash water for the farm’s milking parlor as well as its other needs result in a required 40 tons of water per day, a ratio of nearly two to one for manure produced.

All that makes it the perfect contender for an anaerobic digester installation – a modern, yet highly complex operation. Previously, Fort Hill relied on a lagoon for storage; that lagoon is now being repurposed for stormwater retention.

The digester project’s wheels were already in motion when Peter died, but Orr knew it was a passion project of her father’s, she explains. Fort Hill had partnered with Massachusetts-based Ag-Grid Energy to become the site of the first digester of its kind in Connecticut. It finished in late 2020. (See our January/February issue for our recent interview with Rashi Akki, CEO of Ag-Grid Energy, on why the project was unique for Ag-Grid and where the company is going from here).

Orr admits the digester is a massive undertaking, but one that’s worth it in the long run. Besides coinciding with the recent year-over-year decline in dairy prices, thus helping offset some losses, Orr says the project can also make good use of food waste from the farm and surrounding areas. The plan is to co-digest anywhere from 18,000 to 24,000 gallons per day of food waste.

“That food waste is a big part of what makes that electricity,” she says. “It comes here instead of going to landfills.”

The estimated cost to Fort Hill is $24,000 per year – the result of paying $0.12/kWh to the project. It is estimated that it will produce 3.5 million kWh of electricity per year. Of that, only 200,000 will go toward the farm, while the additional 3.1 million will go into the local grid, operated by Eversource. The estimated price on that is $0.131/kWh, meaning it will generate about $400,000 per year for the farm in passive income.

To help offset the cost, Fort Hill also partnered with Connecticut Green Bank, a financial services provider established by the Connecticut General Assembly in 2011. Green Bank’s mission is to help promote the adoption of green energy in the state, and it does so through grants with preferential interest rates, around two percent for 10 to 15 years.

Bert Hunter, EVP and CIO at Green Bank, explains: “The difference between [our grant] and a higher market rate would be equal to, say, a $200,000 grant that we would otherwise just give away. The benefit of offering them a loan package instead of a grant package is twofold. One is it would give the developer more capital to work with, and because we were willing to subordinate our loan to senior financing, it would enable them to combine their equity with our subordinated loan and secure bank financing on better terms than they otherwise could obtain.” He adds that sometimes, banks would require a higher level of capital in order for the lendee to qualify, from a risk management perspective.

Green Bank makes the money back through interest, says Hunter, who chuckles and says, “We recycle the capital.”

But even though Hunter and his company are in the business of helping big capital projects like this happen, he acknowledges that there are still a number of challenges with adopting them. Besides the financing, he adds that the regulatory side is no joke.

“Particularly when you’re dealing with manure, you want to make sure that things aren’t going into the groundwater. You have to be careful,” he says. While building permits are more straightforward, he says, any permits that go through the Department of Energy and Environmental Protection [DEEP] are a bit more complex.

And beyond the construction costs, he says, there’s the long-term investment. “The big question is always, ‘what are the economics to make everything work?’ It’s the same questions… that any lender or investor will look at in terms of the repayment. In terms of a digester, you have to have confidence in the developer.”

In the case of Fort Hill, the project uses gas to ultimately produce electricity through a generator.

“For a digester on this, which relies substantially on dairy waste, it’s clear to us that the cows are there, the farm has been there for years.” He adds that Connecticut in particular has legislation that states that any large emitter of organic material (such as food waste) that generates more than one tonne per week of materials has to divert those materials to the digester if there’s one within 20 miles of that location. 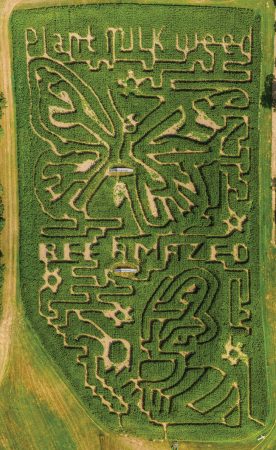 Full circle
Besides the income that will come from the digester, Orr says it will also provide some on-farm support – it will also produce bedding for Fort Hill’s hundreds of cows. “A lot of farms don’t do the separated solids,” Orr says, but adds that being able to do that pays off. “You can separate the solids from the manure and it basically becomes like a sawdust,” she explains. The more the farm relies on itself, she says, the better. The annual savings expected from the digester for electricity, heat and bedding are estimated at $100,000.

But the digester isn’t even Fort Hill’s biggest undertaking of the 2020s.

“I always say, ‘don’t judge me, it’s an old facility,’” Orr says of the family farmstead, including the milking parlor. But that’s among the things she’s aiming to change. “We are working to make it better, but it’s not going to be built overnight. We are slowly working toward building a new facility, which will be a robotic barn.” The hope is that it will be complete in three to five years, and that by 2026, the 200 milking cows will be milked primarily by automated technology (see page 8 for more on the economics of milking technology).

As a fitting complement to the farm’s circular philosophy, the construction of the new barn will be powered entirely by electricity generated from the digester.

Emphasizing outreach
Between the creamery, the digester and the agro-tourism, Orr says the farm’s operations often circle back to one principle: educating the public about the role farms play, and demystifying myths or misconceptions about the dairy industry.

For example, Orr says, one of the things they emphasize throughout their educational endeavours is that the farm isn’t organic – but that doesn’t mean the milk of cows who are treated for ailments make their way into customers’ refrigerators. “Treated milk goes down the drain – it’s never touched a human table.”

Besides working with tour groups on the farm and with local schools to teach students, Orr works with Connecticut State Representatives to help keep the state’s dairy farm industry healthy and lively. The family also established a memorial scholarship in Peter Orr’s name, awarded annually to a local Future Farmers of America high school senior planning to major in agriculture.

And, just like on the home farm, Orr is aware that the work is never done.