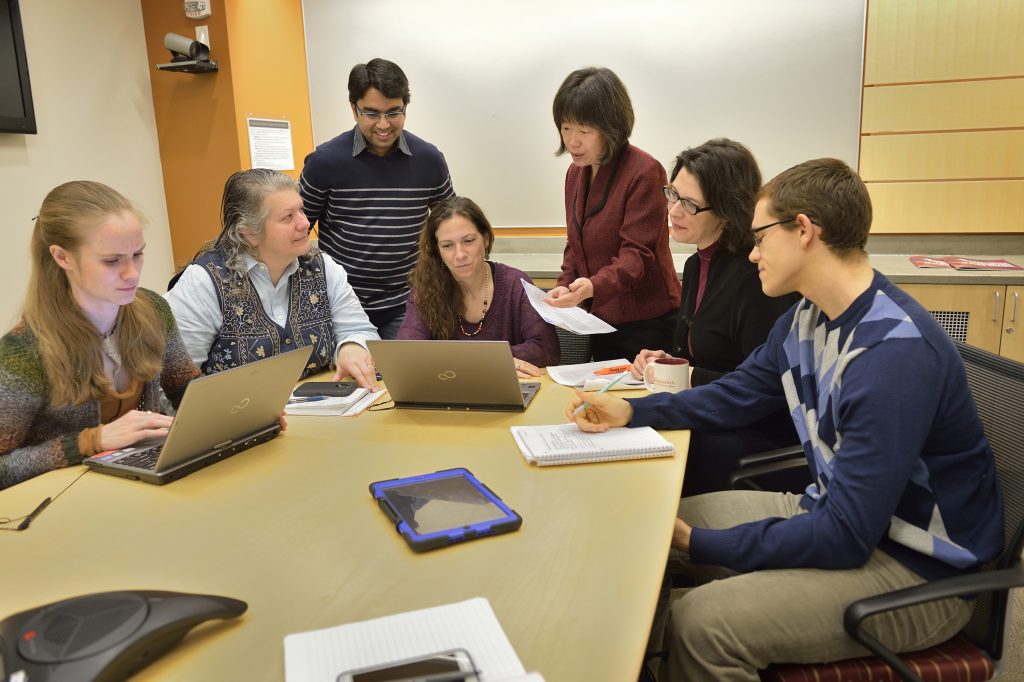 May 20, 2015, Blacksburg, VA — Growing evidence suggests that agricultural practices, especially widespread antibiotic use, could be contributing to the increasing antibiotic resistance problem in humans. In order to learn how to effectively control this spread of antibiotic resistance from livestock manure, the U.S. Department of Agriculture (USDA) has awarded a $2.25 million grant to a Virginia Tech team of engineers and scientists to examine the food chain from farm to fork.

Leading the interdisciplinary group is Amy Pruden, professor of civil and environmental engineering at Virginia Tech, a pioneer in examining environmental sources and pathways of antibiotic resistance genes as emerging contaminants. A 2007 Presidential Early Career Award in Science and Engineering and a 2006 National Science Foundation CAREER Award recipient, Pruden was most recently honored with the 2014 Paul L. Busch Award from the Water Environment Research Foundation for innovation in applied water quality research.

Last September President Barack Obama signed an executive order establishing a task force for combating antibiotic-resistant bacteria. The task force creation came on the heels of a President’s Council of Advisors on Science and Technology report on ways to fight antibiotic resistance in the U.S. Part of this report spoke of the “very serious concern” of antibiotic use in animal agriculture.

Evidence is showing that antibiotic resistance rates of human pathogens is rising in both hospital acquired and community acquired infections. While looking at ways to minimize the spread of resistance, “the fact that the majority of antibiotic use in the U.S. is for livestock cannot be ignored,” Pruden added.

The Food and Drug Administration recently estimated that 80 percent of antibiotics used in the U.S. are administered to livestock. Combine this fact with the knowledge that between “40 and 90 percent of the antibiotic is excreted in the feces and urine where they can remain active and potentially stimulate antibiotic resistance,” cautioned Kang Xia, http://www.cses.vt.edu/people/tenure/xia.html associate professor of crop and soil environmental sciences at Virginia Tech and a co-principal investigator. And it reinforces “our call for new strategies.”

In the U.S., antimicrobials are widely used for therapy, disease prevention, and growth promotion in animals raised as a source of food.

“They generally act by targeting specific aspects of the bacterial cells and inhibiting their growth,” Pruden explained. “However the bacteria can become resistant to antibiotics when they carry antibiotic resistance genes.”

So the Virginia Tech team is focusing on these genes “since they can be shared among bacteria, even dead to living bacteria, and could therefore persist during pre-harvest and post-harvest stages,” said Pruden. “Antibiotic resistance genes are arguably of greater concern than antibiotic resistant bacteria because they are typically associated with mobile genetic elements that enable them to be passed between microorganisms via horizontal gene transfer, a phenomenon possible even from dead to living cells.”

Pruden points out that “horizontal gene transfer is considered to be the most important mechanism driving the spread of antibiotic resistance”.

Monica Ponder, associate professor of food science and technology at Virginia Tech, also a member of the team, noted concerns about produce eaten raw, as vegetable surfaces are naturally colonized by a variety of bacteria, yeasts, and fungi. Most are harmless, but when they do occasionally carry pathogens, the results can be deadly, as was the case in the 2006 outbreak of Escherichia coli O157:H7 linked to spinach.

This contamination can come from lapses in manure management, such as contamination of irrigation water, poor composting, or application too near the harvest time.

“In the U.S., it is not permissible to apply raw manure to fields intended for food production, but there may be simple ways we could improve the composting process, selection of soil type, crop type, or post-harvest washing practices to ensure that antibiotic resistance is not spread,” Ponder said.

The Food and Drug Administration has already launched an initiative to promote voluntary phase out of medically important antibiotics such as third generation cephalosporins in food producing animals.

“While limiting antibiotic use in livestock makes sense from a practical standpoint, the science of the effect of antibiotic withdrawal on antibiotic resistance is complex,” cautioned team member Katharine Knowlton, the Virginia Tech Colonel Horace E. Alphin Professor of Dairy Science.

The new USDA project will integrate research, education, and extension in order to train future leaders equipped to address complex problems like the spread of antibiotic resistance in the environment and to engage with farmers and livestock producers in translating the research to practice.

“Virginia Tech is the ideal locale for this project given its land-grant mission and highly supportive atmosphere for agricultural extension, for which efforts in this project will be lead by Thomas Archibald and Amber Vallotton,” Pruden said.

The team attributes its success in attracting this competitive USDA grant to prior seed funding from the Institute for Critical Technology and Applied Science and a National Science Foundation Research Experience for Undergraduates site, led by Leigh-Anne Krometis, assistant professor of biological systems engineering and W. Cully Hession, professor of biological systems engineering, who round out the team’s members. They developed the integrated undergraduate research and education training infrastructure at Virginia Tech.