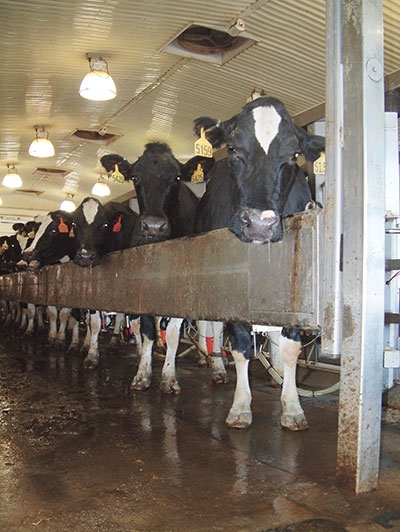 Manure from dairy cows, which is commonly used as a farm soil fertilizer, contains a surprising number of newly identified antibiotic resistance genes from the cows’ gut bacteria according to findings recently reported in mBio, the online journal of the American Society for Microbiology.

Thousands of antibiotic resistance (AR) genes have already been identified, but the vast majority of them don’t pose a problem when found in harmless bacteria. The real worry is when these genes appear in the types of pathogenic bacteria that cause food-borne illnesses or hospital infections.

“Since there is a connection between AR genes found in environmental bacteria and bacteria in hospitals, we wanted to know what kind of bacteria are released into the environment via this route,” of manure fertilization, says Fabienne Wichmann, lead study author and former postdoctoral researcher at Yale University in New Haven, Conn.

Farmers use raw or composted cow manure on some vegetable crops, which could lead to a scenario where residual manure bacteria might cling to produce and they or their genes might move to the human ecosystem.

“Is this a route for movement of these genes from the barn to the table?” asks Jo Handelsman, senior study author and microbiologist at Yale.

The first step toward an answer was surveying which AR genes are present in cow manure. Handelsman’s team used a screening-plus-sequencing approach to identify 80 unique and functional AR genes. The genes made a laboratory strain of Escherichia coli bacteria resistant to one of four types of antibiotics – beta-lactams (like penicillin), aminoglycosides (like kanamycin), tetracycline, or chloramphenicol.

Roughly 75 percent of the 80 AR genes had sequences that were only distantly related to AR genes already discovered. The team also found an entirly new family of AR genes that confer resistance to chloramphenicol antibiotics, which are commonly used to treat respiratory infections in livestock.

“The diversity of genes we found is remarkable in itself considering the small set of five manure samples,” says Handelsman, who is also a Howard Hughes Medical Institute Professor. “But also, these are evolutionarily distant from the genes we already have in the genetic databases, which largely represent AR genes we see in the clinic.”

That might signal good news that AR genes from cow gut bacteria are not currently causing problems for human patients. But, Wichmann points out, another possibility is that “cow manure harbors an unprecedented reservoir of AR genes” that could be next to move into humans.

“This is just the first in a sequence of studies – starting in the barn, moving to the soil and food on the table and then ending up in the clinic – to find out whether these genes have the potential to move in that direction,” says Handelsman.

AR genes can enter the human ecosystem by two routes—either the bacteria that contain them colonize humans, or the genes are transferred through a process called horizontal gene transfer to other bacteria that colonize humans. Research has already shown that bacteria are transferred from farm animals to their human caretakers. Gene transfer enables genes to jump between microorganisms that are not related, and it occurs in most environments that host bacteria.

Some manure bacteria might be pathogenic to humans, so if they acquire antibiotic resistance, they could pose a problem. Alternatively, benign bacteria in manure might transfer resistance genes to pathogens at any point along the path—in manure, soil, food, or humans.

“We’re hoping this study will open up a larger field of surveillance, to start looking at new types of resistance before they show up in the clinic,” says Handelsman.