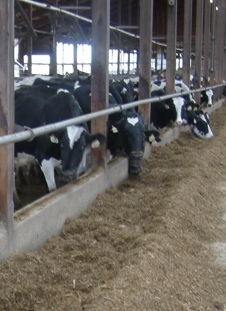 June 11, 2013, Fayetteville, AK – Researchers at the University of Arkansas are attempting to help the U.S. dairy industry decrease its carbon footprint as concentrations of carbon dioxide in the Earth’s atmosphere reach record levels.

In 2007, Americans consumed approximately 17.4 million metric tons of fluid milk – milk consumed as a drink or with cereal, rather than milk used in dairy products such as cheese, yogurt and ice cream. The dairy industry has set a goal of 25 percent reduction in greenhouse gas emissions by 2020.

The U of A researchers’ “cradle-to-grave” life-cycle analysis of milk will provide guidance for producers, processors and others in the dairy supply chain and will help these stakeholders reduce their environmental impact while maintaining long-term viability.

“Based in part on growing consumer awareness of sustainability issues in our food supply chain, the U.S. dairy industry is working to further improve the environmental performance of its production processes and supply chain in a way that is also economically sustainable,” said Greg Thoma, professor of chemical engineering. “Our analysis provides a documented baseline for their improvement efforts. It is a source for understanding the factors that influence environmental impact.”

Thoma and an interdisciplinary team of U of A researchers looked at all facets and stages of milk production, from the fertilizer used to grow the animal’s feed to waste disposal of packaging after consumer use. Specifically, their life-cycle analysis focused on seven areas:

The researchers found that for every kilogram of milk consumed in the United States per year, 2.05 kilograms of greenhouse gases, on average, are emitted over the entire supply chain to produce, process and distribute that milk. This is equivalent to approximately 17.4 pounds per gallon. The greenhouse gases were measured as carbon dioxide equivalents and included methane, refrigerants and other gases that trap radiation. The largest contributors were feed production, enteric methane – gas emitted by the animal itself – and manure management.

The researchers identified many areas where the industry can reduce impact within feed and milk production, processing and distribution, retail and the supply chain. They focused on farms, where processes for feed production, handling of enteric methane and manure management varied greatly and therefore represent the greatest opportunities for achieving significant reductions.

The researchers suggested widespread nutrient management strategies that link inorganic fertilizer use with the application of manure for crop production. They recommended dry lot and solid storage systems as preferred management strategies, rather than anaerobic lagoons and deep bedding. Methane digesters, which biologically convert manure to methane and capture it as an energy source, should be a high priority for larger farm operations, Thoma said.

“Methane digesters have great potential as a way to capture and utilize methane, which is natural gas, that is otherwise lost to the atmosphere,” he said.

At the processor and distribution level, greater emphasis on truck fleet-fuel usage and consumption of electricity will reduce emissions, the researchers said. Implementing standard energy-efficiency practices focused on refrigeration and compressed-air systems, motors and lighting will also lead to reduction. Likewise, processor plant fuel reductions can be achieved through improved steam systems and continued energy-efficiency improvements in other operating practices.

With packaging, emissions reductions could come from improved bottle designs resulting in less material use. Specifically, changing the bottle cap manufacturing process from injection molding to thermoforming may lower environmental impact. Similar suggestions have already been made for yogurt packaging and containers.

Finally, the researchers recommended a careful examination of trucking transport distances to realize greater optimization and efficiency of routes. They also suggested transport refrigeration systems that use fewer refrigerants.