California dairy producer fixes a persistent problem from the past, brightening the operation's future 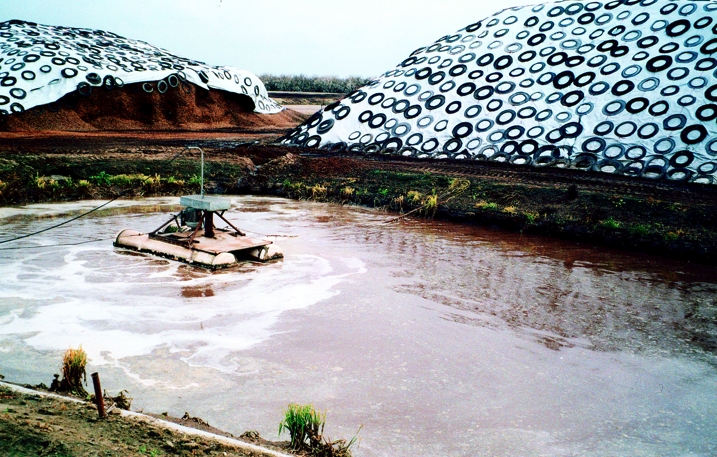 Each Natural Aeration CirCulator, housed in a dome-shaped cowling, uses a 24-inch agitator to lift over five million gallons a day.

April, 2003, Modesto, CA – As an excavator mucked out the pungent sludge at the bottom of his liquid manure lagoons, Modesto, California, dairy farmer Pete Verburg realized his whole approach to handling manure needed a breath of fresh air – in fact, lots of fresh air.

Verburg was struggling with many of the drawbacks of a conventional liquid system, including foul odors, inconsistent nutrient application, the headache of pumping sludge through his irrigation scheme and the need to muck the whole thing out every few years.

“I decided there had to be a better way of doing things,” he recalls. “Aeration was the approach I opted for.”

To help his lagoons breathe easier, the self-proclaimed maverick launched a US $140,000 manure system makeover, installing a dozen aerating CirCulators from Natural Aeration Co early in 2002. Within months, his wastewater has gone from beastly to beautiful.

Verburg can see – and smell – the difference. More importantly, so can his cows. The Verburg & Son Dairy uses a flush system to clean out the barns, cycling water from the lagoons back through the barn. Under the old scheme, “the flush alleys were really slick because you had this slime on your concrete from the lagoon. It was like having your cows on an ice-skating rink.” Bovines ran the risk of a career-ending fall and respiratory irritation from the ammonia and hydrogen sulfide gases released from the flush water.

Now, both the air and the alleys are cleaner.

“After four or five months with the new system, you can take your fingernail and scrape that concrete and you don’t have any of that slime. The alleys look like they were poured yesterday.”

The new-look alleys mirror a larger transformation in the manure-handling system, as the lagoons have shifted from an anaerobic – or oxygen-deficient –system to an aerobic one, where oxygen is relatively plentiful. The extra oxygen promotes the growth of aerobic microbes, critters that work harder and smell better than the slime-producing anaerobic bacteria that hang out in septic tanks and conventional lagoons.

While the anaerobes produce their trademark septic odor by belching methane, ammonia and hydrogen sulfide, aerobic critters give off relatively mild byproducts, including carbon dioxide and water. Aerobic microbes also work about five times faster than their anaerobic cousins, so they do a better job of breaking down suspended solids. Because less nitrogen escapes as ammonia gas, more of the nutrient is retained in the effluent.

By keeping that good stuff in the lagoon – and eventually using it on crops – “we’re helping our customers harvest these nutrients,” says Gary Wegner, CEO of Washington State-based Natural Aeration Co. “Producers have been stuck in a disposal mentality and we’re trying to change that.”

The aerobic approach “is all about mixing and delivering oxygen into the water,” Wegner says. “If the whole system can be aerobic all the time, then we don’t lose nitrogen and we don’t have these odors and pathogens.”

He likens getting the right mix of aerobic microbes in the lagoon to striking the proper microbial balance inside the cow’s rumen. “If we get the biology right, good things can happen.”

The transformation not only improves the bottom line, it makes the task of handling manure a little more pleasant – an important plus when the farm plays host to a milking herd of 800, with another 1,200 calves, replacement heifers and dry cows. The milking string averages 24,600 pounds of milk per year, with 872 pounds of butterfat. And while the bovines are churning out all that milk, each mature cow is also producing about 14 tons of manure a year and about 7,300 gallons of waste water.

To keep the herd’s freestall barns clean, the Verburgs use a 2,200-gpm flush system, originally installed in 1986. The walking and feed alleys in the barn are flushed three times a day in the winter and twice daily in the summer (when the herd spends more time outside in exercise yards), using recycled water drawn from the lagoons. The water, laden with manure and feed waste, is then collected in a sand trap, a concrete-lined pit about eight feet deep and about 100 feet around, where the sand settles out.

The effluent is pumped through a DH Manure Separator, made by California-based Albers Manure Handling Systems, Inc. The solids are strained out, as the liquid washes through a 3/32-inch stainless steel screen, and raked into a pile. The solids are windrowed to dry and compost before the crumbly, absorbent material is either used as bedding in the barns or spread on orchard and crop land by a custom operator.

“We stay about six months ahead of our separator,” Verburg says, outlining the composting process. “The material will get about 164-165 degrees F. If you go back three or four days after you’ve piled it, it has reached 164 degrees, and that temperature cooks the pathogens out of it.”

After flowing through the separator, the liquid portion of the waste is pumped into a 13.8-million-gallon lagoon, equipped with six Natural Aeration Company CirCulators.

With their 1.5-hp electric motors housed in a dome-shaped cowling and floating on six outstretched arms, the units look a little like mechanical squid as they churn the water at 140 rpm, circulating the water in the lagoon and exposing it to the oxygen at the surface. The action of the CirCulators draws water from the bottom of the lagoon, encouraging a constant turnover in the water column. Each unit uses a 24-inch agitator to lift over five million US gallons per day.

Verburg’s three lagoons are set up to waterfall from largest to smallest, using a weir-board system to adjust water levels.

The second lagoon stores up to seven million US gallons and is stirred by three CirCulators. The third lagoon holds five million gallons and hosts another three aeration units. Water is pumped from the third lagoon for the flush system or diverted into the farm’s irrigation scheme.

The key to effective lagoon circulation is good maintenance.

“If there’s anything on the bottom of the lagoon – baler twine, old tires, you name it – the aerator’s going to find it and pull it up,” Verburg warns. “If you’ve been lax in what you put in the lagoon, it’s going to drive you crazy.”

Unlike liquid systems that handle a manure slurry, removing the solids is an important part of Verburg’s approach: the fewer solids in the effluent, the better it flows through the farm’s irrigation lines.

Along with the dairy operation, Verburg grows 350 acres of almonds, walnuts and row crops in a region with an average of 12.4 inches of rainfall a year. To make up for the moisture deficit, the farm can be flood-irrigated using a system of 36-inch, poured-in-place concrete pipes to deliver the water.

With effective solids separation and good aeration, Verburg can inject manure water into the irrigation water for a consistent, nutrient-rich, easy-flowing liquid.

By sampling the lagoon water every month for nitrogen, phosphorus, potassium and organic matter, Verburg has a good idea of its nutrient value. His crop advisor then matches the irrigation schedule to the crop’s requirements. Future plans include installing meters in the irrigation system to get a more precise tally of the volume of nutrients being released.

Despite the initial cost of the upgrade, Verburg is expecting a relatively quick return on his investment.

“We’ve only had the system in for a year, but if you’re looking at my commercial fertilizer bill over the years, I’m guessing it will pay back in five years.”

The aeration also reduces the high levels of solids that plagued the old system. Before, solids would form a sludge and settle out in front of the irrigation gates, burning off the crops.

“Before I put the system in, you’d have so many solids that after two or three years you’d have this sludge in the bottom of your lagoon. You could pump the slop out, but it would go about 25 or 30 feet, and that’s where it would stop. You’d kill everything in front of your irrigation gate for 30 or 40 feet.”

“I’ve cut my commercial fertilizer down to zero,” Verburg says. “I’m getting a consistent product and a much better product and I’m not killing everything in front of my irrigation gates.”

Along with better flush water for the barn and improved nutrient benefits from the irrigation system, there are also aesthetic improvements. Foul odors have been virtually eliminated. Globules of manure no longer percolate through the lagoon, driven by bubbles of methane.

The lagoon doesn’t crust over and the effluent looks clear, aside from a reddish tinge produced by millions of tiny, purple-colored aerobic bacteria. Along with the benign scent of the water, Wegner says the red color is a good indicator that the lagoons are receiving enough oxygen.

With the old system, the soupy water from the lagoon and the flush system clogged the manure separator’s screen with slime. Under the new system, the screen remains slime-free. Verburg is planning to take advantage of the change by installing a finer screen, hoping to remove still more solids from the effluent.

The farm has seen a lot of changes since Verburg – newly-married to wife Jayne – began milking 72 cows in 1963. The growth of the operation has seen the transition from dry manure to the lagoon system and, finally, the anaerobic approach.

“My son, Vernon, runs the dairy now,” says 60-year-old Verburg, who now looks after what comes out of the cow’s back end, rather than her udder. “I’ve been relegated to toilets and trash cans.”

Nutrient management is nothing new for Verburg. A Dutch immigrant who came to California with his parents and nine brothers and sisters in 1951, he’s kept in touch with cousins in the old country and observed the relentless march of manure-handling regulations in Europe.

“If you look at Holland and the regulations they have for putting manure onto land, it’s unbelievable. I’ve got cousins who have dairies in Holland and there are times you can’t apply manure. When you do, you have to inject it, you can’t spread it on top.”

In the U.S., stricter federal nutrient management rules are “coming down the pike. I’m sure it’s going to be a lot tougher than what we have to live with today,” says Verburg. “That’s the main reason I put in this system. I’m going to stay ahead of the changes.”

He sees the role of manure manager as an increasingly important one.

“We as an industry can’t continue the way we’ve been going. For too many years dairymen have turned a blind eye to their manure problems.”

“I’ve had other dairymen in to look at the systems, and I tell them ‘Guys, the day isn’t too far off that if we don’t do something, the regulators are going to tell you what to do, and how to do it. When that day comes, you’ll be a lot better off if you do it yourself, rather than let someone else tell you what to do’.”