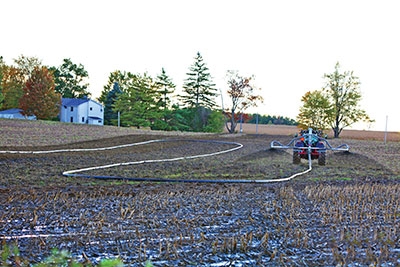 Necessity is often the mother of invention and farmers are excellent inventors. One of the first farmers to experiment with using his irrigation equipment for spreading manure also built a prototype boom to aid in application. Paul Sontrop

Necessity is often the mother of invention – that goes double for farmers.

Cadman, with the help of innovative farmers in need, has developed a drag hose system that works as well today as it did 20 years ago.

In the 1990s, new Ontario, Canada, environmental regulations banned farmers from using their irrigation systems to spread manure through a sprinkler gun. Farmers had gotten used to the efficient system and didn’t want to go back to tankers, which, among other things, were more time consuming when it came to spreading large daily volumes of manure.

To meet these new environmental standards, an innovative farmer named Doug McLeod of Stratford, Ont., decided to take matters into his own hands. He built a manure-spreading prototype boom to see if he could still utilize his Cadman water irrigation equipment and continue the efficiencies gained over tankers for large single-day manure spreading setups.

McLeod pieced together a crude two-nozzle boom and hooked it up to his Cadman irrigation system. After working out some of the bugs, he approached Cadman – which had quietly been designing a complete line of manure handling equipment in response to the same new government regulations – to help build a more sophisticated version of his prototype. The company took on the challenge and McLeod was the first farmer to have a commercial boom.

New options
It didn’t take long for other farmers working in conditions that are optimal for dragline setups to begin investing in the new Cadman booms to work in conjunction with their irrigation systems.

The setup took about an hour and half (and still does), and for larger fields with large daily manure volumes, it saved a lot of time driving back and forth with a tanker. A big manure reel could be parked in the field and never moved while hooked up directly to a manure pit as much as a mile and a half away.

“Spreading the same large daily manure volumes with tankers necessitated numerous trips back and forth between the field and pit, which ate up a lot of time, fuel, caused a lot of compaction in the field as well as exposure to annoying and sometimes dangerous highway traffic issues,” says Craig Cadman, of Cadman Power Equipment.

Hard hose takes hold
In early 2000, with the help of motivated farmers like McLeod, Cadman continued to modify their manure handling systems. The line of booms was improved and expanded to work with the company’s already extensive line of hose reels, hose caddies, power units and variety of hoses.

Also, over the years more models of reels and caddies were developed by Cadman to accommodate specific manure applications – including a range of hard hose reels specifically engineered to handle the more strenuous conditions of manure spreading.

In short, drag hose reels didn’t need the bells and whistles of irrigation reels. What was needed was something more rugged and unique to manure handling. Manure reels were beefed up with a bigger drum, heavier frame and wheels to accommodate the larger and heavier drag hoses.

The hard drag hoses continued to evolve during the early 2000s. First, Cadman switched to larger diameter hoses to handle the demands of manure versus water. Next, the company realized it needed a tougher hose composition to better handle dragging over frozen soils, stony ground and rough stubble. Working directly with their hose supplier, Cadman engineers incorporated a company-developed resin formula. Over time, that formula was perfected for superior longevity and ruggedness.

Soft versus hard hose
There are basically two types of drag hoses out there on the market today – polyurethane soft hose and polyethylene hard hose. Though both soft and hard hose systems offer comparable levels of tensile strength and burst pressure, there are important differences:

Because hard hoses are round and solid, they won’t twist in the field like soft hoses.

With so many benefits to hard hose, why do farmers still choose soft hose systems? “It all gets down to cash flow and upfront investment differences,” says Cadman.

So what are those cost differences between a soft and hard hose system?

“With those numbers, it is understandable that most drag hose customers still opt for the soft hose systems,” says Cadman. “However, livestock farmers, and particularly custom operators, report that the hard hose drag reel system definitely produces the highest rate of return on investment over the long haul.”

Future of hard hose
This is hardly the end of the story. New advancements in this system and others continue. Cadman engineers (and a few farmers) are at work, creating that next advancement to help make manure spreading that much more efficient and affordable.