It’s hoped new research being conducted in Canada will lead to steps that farmers can take, resulting in a big impact on reduction of greenhouse gas emissions 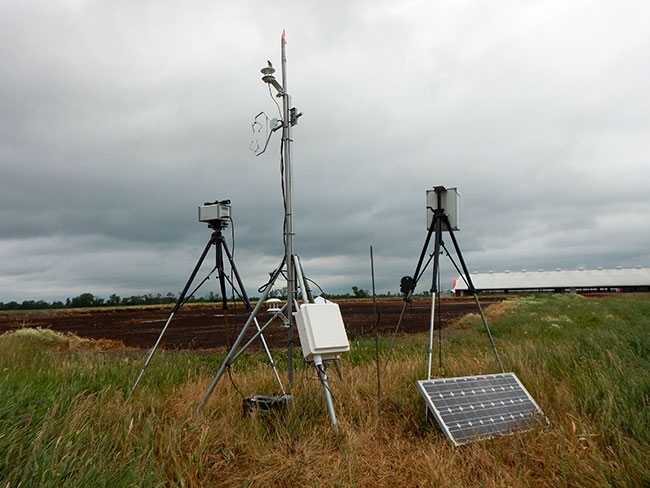 These open-path sensors measure how much the concentration of methane has increased as the air passed over the manure storage, which is combined with detailed measurements of the wind speed and turbulence measured by a 3D anemometer. Photo courtesy of Andy VanderZaag

The Government of Canada has made international commitments to reduce greenhouse gas (GHG) emissions by 17 percent by 2020, and because methane is a GHG with a global warming potential at least 25 times greater than carbon dioxide, it’s an important focus. The fact that it is short-lived in the atmosphere means that a reduction in methane emissions is much more beneficial than a reduction of other GHGs.

If you look at Canada’s greenhouse gas inventory, methane makes up a large percentage – 15 percent in 2013 to be exact, and it was 48 percent of agricultural emissions. On both the international and national climate change stage, methane emissions from manure management have come into the spotlight because it is an area where substantial mitigation can be achieved quite quickly. Therefore, as part of its lead partner role with the Climate and Clean Air Coalition (CCAC), Canada is leading research into measuring and reducing methane emissions through better manure management. This effort includes scientists from Agriculture and Agri-Food Canada (AAFC), Environment Canada, and the University of Guelph, in coordination with Environment Canada’s Climate Change International group, and international groups such as the Global Methane Initiative, United Nations Food and Agriculture Organization, World Bank, and more than 30 country partners.

“The methodology was developed by the Intergovernmental Panel on Climate Change, and based on the use of anaerobic lagoons covered by a membrane, but these are rare in Canada,” explains AAFC scientist Andy VanderZaag. “The models also assume that manure temperature is equivalent to air temperature, which is not correct. So we are developing and testing a sub-model that describes manure temperature as a function of air temperature, and accounts for other major factors such as how a storage area is filled and emptied, and how much agitation occurs.”

Canada’s National Inventory Report, as it is, doesn’t take mitigation practices into account.

“In other words, if every farm in the country adopted a mitigation practice to reduce its methane emissions, the emission total would not change,” notes VanderZaag. “So, based on the on-farm measurements being collected, it was time to update things, and to develop a responsive methane emission model for manure management that captures differences across climatic ecozones.”

The initial plan was developed in 2013, and VanderZaag and his colleagues continue to build on the new framework.

The model will be used to create a lookup table of methane conversion factors that corresponds to the large suite of inputs that already were found in the existing traditional calculation and reporting approach.

“We are working on a validated algorithm to ‘gap-fill’ across factors,” explains VanderZaag, “thereby creating a complete table that allows for determining emissions and mitigations in Canada, which also corresponds to international values.”

The researchers also needed to discover how manure was currently being managed in Canada, so they analyzed existing surveys and initiated a new survey of Canadian farmers. VanderZaag says they knew that methane emissions from liquid manure are important and that liquid manure management has become more and more popular over recent decades, but that they needed to quantify the trend in order to use it in the calculations.

“Our survey showed that liquid manure is the dominant practice in intensive dairy and swine production,” he says, “and that the percent of manure stored in liquid form has increased rapidly in Canada.”

The survey results also helped the scientists determine the times of year when manure storage facilities are usually emptied, the types of manure storage being used (tank, earthen basin, lagoon) and many other important factors.

The researchers began measuring methane emissions from manure storages in 2011, using a new technique that uses open-path laser spectrometers to measure the concentration of methane in the air upwind and downwind of the manure storage. Each laser is paired with a pan-tilt robotic mount that aims it at a specialized reflector designed to return the laser beam back to the sensor. These open-path sensors measure how much the concentration of methane has increased as the air passed over the manure storage, which is combined with detailed measurements of the wind speed and turbulence measured by a 3D anemometer that measures the wind in three dimensions 10 times each second. Knowing the change in methane concentration and the wind conditions enables the scientists to calculate how much methane is being emitted by the manure storage.

“This technique is very valuable because it lets us measure the manure emissions without disturbing the storage, or covering it, both of which change the way methane is produced and emitted,” says VanderZaag.

He adds that another big advantage is that “our measurements don’t get in the way of the normal farm activities, which is very important so we can observe what happens under normal conditions, throughout the year.”

At this point, research results are preliminary, but VanderZaag and his colleagues can, to some extent, make preliminary suggestions for farmers in order to cut methane emissions coming from manure.

Climate
“We are expecting to see big differences in methane emissions in the region studied,” says VanderZaag. “The warmer it is, the more bacterial growth there is and the more methane is produced, and some regions may have more opportunity for mitigation than others. We don’t know yet if that’s a place that’s warmer on average through the whole year, or just warmer in the summer, and the length of warm season matters as well. Then we have to measure methane emissions and look at mitigation methods in different geographic locations.”

Storage system (earthen basin vs. concrete tank)
“We don’t know yet if there is a difference in methane emissions between different storage types, and if there are differences, why they exist. We also have to look at whether a roof matters or whether above or below ground matters, and so on.”

Livestock type
“We have been working mainly on dairy so far but we’ll be doing both dairy and swine studies over the next few years. The manure is generally treated the same, but volatile solids are more efficiently converted to methane in swine manure, which mean methane emissions are higher. But hogs don’t emit methane directly like cattle do.”

Feed
“We know that methane emissions are driven by the amount of carbon available in manure, which is in turn based on the amount of solids, which is in turn based on livestock feed,” VanderZaag explains. “We hypothesize that livestock fed with corn-based feed produce volatile solids that have higher degradability than livestock fed with barley-based feed. Additionally, particularly in dairy, a significant amount of volatile solids can be added to the manure storage from bedding materials such as straw or woodchips. But it’s hard for farmers to keep bedding separate.”

Emptying timing and full vs. partial emptying of manure storage
“If farmers remove manure earlier in the fall from storage and get it on the fields, they can reduce methane emissions by 25 percent over waiting until late fall. In the fields, there is no anaerobic bacterial action. If farmers more thoroughly clean their manure storage, it takes longer for methane-producing organisms to grow back, which can reduce emissions by half.”

Storage management
“Solid-liquid separation is very effective. Separation reduces methane produced by the liquid fraction, and emissions can be cut by more than half using a screw press separator and composting the solids.  We know biodigesters capture methane and reduce the amount of solids, which reduces methane by half, but digesters aren’t for everyone. We still have to study the impact of floating covers and natural crusts on methane emissions.”

Research is continuing, and VanderZaag would like to stress that there is a lot of potential to reduce methane production on farm that does not affect livestock productivity.

“We also want farmers to know that we are working with colleagues on figuring out how changes in manure management might affect other aspects of the farm system, such as nitrogen availability in the fields if manure is applied earlier in the fall,” he says. “A farm is a large and complex system, and it’s important that before suggesting farmers manage manure differently to reduce methane – which is a very positive thing for the farm and the environment – we have solid evidence to assure them it’s not going to have a negative effect on some other part of the farm.”