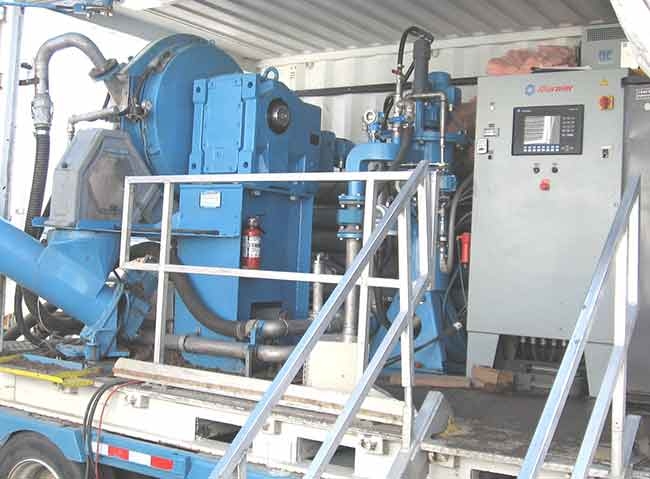 A decanter centrifuge can be operated without flocculants, but a rotary press requires flocculants to operate effectively – it plugs without them when processing swine manure. Contributed photo

In Manitoba, certain geographical areas have a level of phosphorus (P) being produced in swine and other manures that’s higher than the available acres in the immediate area. In order to comply with provincial regulations, livestock producers in “phosphorus surplus areas” have to implement ways to redistribute nutrients (that is, manure) to “phosphorus deficient” areas. The Manitoba Livestock Manure Management Initiative (MLMMI) is undertaking a series of projects to find effective, affordable solutions for producers.

Feed management, increasing the land area available for manure application, boosting P removal rates through crop rotation, and transporting manure to other areas are all being examined. Manure treatment is another option but, due to its cost, it’s generally considered the last option in a P management plan and must be analyzed for viability in light of how all other factors come into play on an individual farm, notes Lorne Grieger. He is assistant vice-president of Manitoba operations and manager of agricultural research and development services at the Prairie Agricultural Machine Institute (PAMI), based in Portage la Prairie, Man.

Manure treatment technologies include digesters, composting, precision manure application and solid/liquid separation. The latter separates out most of the phosphorus with the manure solids, creating a nitrogen-rich liquid fraction and a P-rich solid fraction.

“The theory is that the nitrogen-rich liquid fertilizer can then be used locally and applied to somewhat higher phosphorus soils, balancing out the nutrients,” Grieger says. “The solids containing the phosphorus can be transported to areas where soils are lacking sufficient phosphorus.”

But how much P can be removed from the liquid fraction? Researchers at PAMI examined two solid/liquid separation technologies, a decanter centrifuge and a rotary press, to find this out and also to nail down setup and operational costs for these processes, including all necessary on-farm adjustments. The tests took place at a commercial finishing barn, with funding provided by the MLMMI and Manitoba Pork Council.

“These are two manure treatment processes with a potential for implementation in Manitoba, but there are currently none in use in the province,” Grieger explains. “I’m not sure about other jurisdictions.”

A decanter centrifuge can be operated without flocculants, but a rotary press requires flocculants to operate effectively – it plugs without them when processing swine manure. Adding flocculants during de-watering aids in P removal because they cause larger particles to be formed – particles that can much more easily be separated from a liquid.

The two systems were run consecutively for nearly four weeks with finishing barn liquid manure slurry at varying solids concentrations. Trials were performed over multiple days with a range of manure consistencies to see how each system would adapt to changing conditions. During each daily trial, samples were collected from the manure slurry at the point of entry into the equipment as well as from the liquid and solid fractions out of each piece of equipment. The samples, with solids concentrations both above and below three percent, were analyzed at a third-party lab.

It was discovered that the P removal ranged from 32 to 73 percent for the centrifuge without flocculants and 56 to 64 percent when using flocculants. The rotary press – which must always employ flocculants – removed P in roughly the same range, 28 to 62 percent.

“The upstream manure handling system will need to be able to accommodate the surges expected from inconsistent pit pulling, plugged lines and so on,” he says. “Existing barn routines may be inconsistent with the needs of operating a manure treatment system effectively, so they’d need to be examined and possibly re-vamped.”

The separation equipment itself – either a centrifuge or a rotary press – is manageable by trained and technically competent staff. Both separators also have the capability of being automated with programmable cleaning cycles and interlocks.

However, cost remains a large barrier.

“Although these technologies are effective at removing P from liquid effluent, the capital cost of the equipment plus the infrastructure upgrades required to operate them year-round are extensive,” Grieger notes.

While Grieger notes manure treatment works to remove P from swine manure, its cost may be prohibitive, as is the cost of manure transport as an overall solution in Manitoba.

“Since excess phosphorus relative to the local land base is the root cause of the phosphorus issue in this province, locating new livestock production operations areas that require additional phosphorus for the local land area appears to be a better long-term solution,” he says.

For more information on this study, visit manure.mb.ca/projects/viewproject.php?id=87.