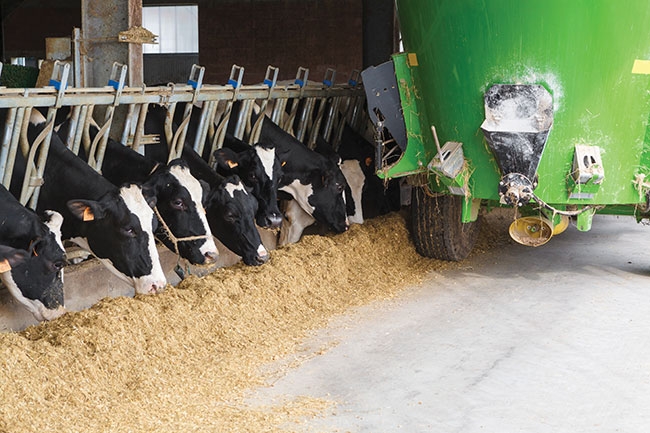 Researchers from Agriculture and Agri-Food Canada, Agriculture Victoria (Australia), and the University of Melbourne, worked together to examine three feed supplements. Photo: Fotolia by Adobe Stock

Beef and dairy farmers around the world are looking for ways to reduce methane emissions in their herds and cut greenhouse gas emissions – a global priority. To help meet this goal, researchers from Canada and Australia teamed-up for a three-year study to find the best feeding practices that reduce methane emissions while supporting profitable dairy and beef cattle production.

“We need to know how feed affects methane production, but we also need to know how it affects other aspects of the farm operation, like daily gains in animals, milk production, and feed efficiency,” said Dr. Karen Beauchemin, a beef researcher from Agriculture and Agri-Food Canada [AAFC]. “Farmers want to help the environment, and need to know what the trade-offs will be.”

Researchers and system modellers from AAFC, Agriculture Victoria [Australia], and the University of Melbourne worked together to examine three feed supplements, including 3-nitrooxypropanol (3NOP).

3NOP is a promising commercial feed supplement that can be given to cattle to inhibit the enzyme methyl coenzyme M reductase – an enzyme responsible for creating methane in the animal’s rumen. After blocking the enzyme, 3NOP quickly breaks down in the animal’s rumen to simple compounds already present in nature.

Dr. Beauchemin studied the short- and long-term impacts of feeding 3NOP to beef cattle and shared her findings within the broader study.

“We now have clear evidence that 3NOP can have a long-term positive effect on reducing methane emissions and improving animal performance,” she said. “We saw a 30 to 50 percent reduction in methane over a long period of time and a three to five percent improvement in feed efficiency.”

Producing milk, gaining weight, and creating methane all take energy that a cow fuels by eating. Cattle eating a diet that contained the 3NOP supplement produced less methane. Because there was less methane, more energy could be used by the animal for growth. When using this supplement, cattle consumed less feed to gain a pound of body weight compared to the control.

“What is also great is that the inhibitor worked just as effectively no matter what type of feed the cattle were eating,” said Dr. Beauchemin. “We don’t know the actual market price of the supplement yet because it is still going through approvals for registration in Canada and the U.S. That will be important for farmers who want to calculate the cost-benefit of using 3NOP.”

Microorganisms in the cattle’s rumen need nitrogen to be able to efficiently break down food for the animal to absorb. Nitrate is a form of non-protein nitrogen similar to that found in urea. When nitrate is fed to cattle, it is converted to ammonia that is then used by the micro-organisms. During this process, nitrogen in the nitrate works like a powerful magnet that is able to hold and attract hydrogen. This leaves less hydrogen available in the rumen to attach to carbon to make methane.

Researchers in Canada found that adding nitrate to the diet of beef cattle reduces methane production by 20 percent in the short-term (up to 3 weeks), and after 16 weeks, it still reduced methane up to 12 percent. In addition, feeding nitrate improved the gain-to-feed ratio. However, administering the correct dosage is extremely important, as too much nitrate can make an animal ill. So it is recommended this method should be used with care and caution.

“I understand that in Canada, most forages are not that low in protein,” said Dr. Richard Eckard, a researcher from the University of Melbourne. “But in the rangelands of northern Australia, the protein content in the forage is extremely low. It is possible that adding nitrate to Australian cattle feed may be able to improve the feeding regime from the current use of urea, but it depends on the price.”

In the short term, wheat effectively reduced methane production by 35 percent compared with corn or barley grain; but, over time, cattle were able to adapt to the change in feed and the methane inhibitory effect disappeared. Essentially, after 10 weeks, methane production was the same for corn, barley, and wheat.

The study also showed genetic variation in cows where about 50 percent of the cows that were fed wheat remained low in their methane emissions, even for as long as 16 weeks. However, the other cows adapted to the wheat diet and had methane emissions similar to, or even greater than those fed diets containing either corn or barley. Based on genetics, some cows are more adaptable than others and, in the long-term, it is more difficult to reduce the amount of methane they produce.

For dairy cows, Dr. Peter Moate, a dairy researcher with Agriculture Victoria, was particularly intrigued about the link between milk fat, yield and methane emissions.

“Our better understanding of feeding regimes will make a difference for farmers but, more importantly, this research has helped us understand more precisely the volume of greenhouse gases (GHGs) the industry is producing under different feed regimes,” said Dr. Beauchemin.

While this project has wrapped-up, the work has not ended. Researchers in both countries unanimously agree that they will continue to help farmers and the industry find solutions to reducing their carbon footprint.