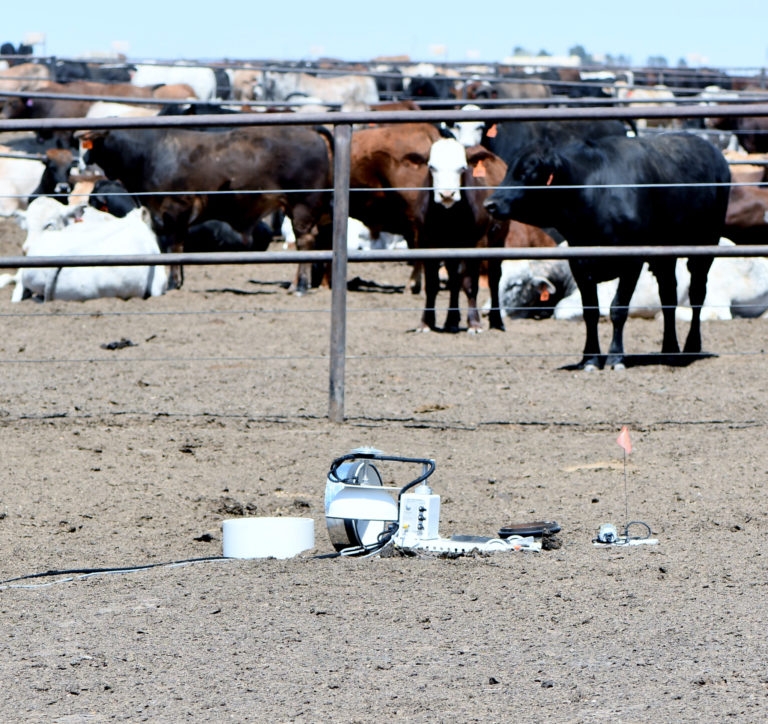 A week spent in a feedyard pen is helping researchers gain a better understanding of greenhouse gas emissions. Their goal is to improve the national inventory of greenhouse gases and determine potential mitigation measures.

Texas A&M AgriLife Research and the U.S. Department of Agriculture-Agricultural Research Service are collaborating to analyze nitrous oxide and methane emissions from an area feedyard pen.

The project is funded by USDA-ARS and AgriLife Research, with instrumentation used in the study partly supported by the Texas Cattle Feeders Association.

Halfway through the experiment, a half-inch of water was applied to the pen surface within the measurement chamber bases to simulate a rainfall.

“We’re looking to understand better what controls nitrous oxide and methane coming off feedlot pen surfaces,” Casey said. “We’re interested in the emissions of these gases because of their contribution to climate change. We want to improve the national emissions inventories as they pertain to greenhouse gases from feedyards in the Texas High Plains.

Casey said their testing demonstrated areas of the pen with shallower manure packs on the surface primarily emitted nitrous oxide, while two chambers sitting over deeper manure where the pen drain was located emitted almost no nitrous oxide, but were emitting methane.

“We are trying to understand the interplay of those two gases, because the processes that are producing them are related,” he said.

The different factors that influence the creation and release of the gases include temperature, moisture content and the amount of manure on the pen surface, Casey said.

“By understanding how those factors play together in the production of those gases, we can develop a greater understanding and potentially develop mitigation strategies,” he said.

“However, it’s complicated, because a strategy that reduces one emission may in fact increase the other. So our understanding of the production of these gases and the environmental factors that influence them are important.”

During the study, gas samples were collected twice a day from the static chambers and then taken to Casey’s air quality lab to be analyzed on a gas chromatograph. Six automated chambers took measurements each hour, around the clock. The automated chambers were linked through a multiplexer to automated nitrous oxide and methane analyzers.

“We know emissions are influenced by temperature, and by taking diurnal measurements, we can understand the variability throughout the day and night, as well as that of the effects of moisture.”

The week of measurements is only part of ongoing research being conducted by Casey and Parker. Casey said the results will be reported to the industry, as well as in various journals along the way, and will be used for extended air quality research.

Parker said their research is also relevant to manure quality.

“Not only is this research important for greenhouse gas emissions, but through this and ongoing laboratory studies, we are learning more about nutrient transformations and water losses from the feedyard surface,” he said.