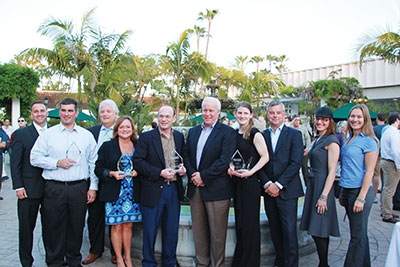 At its recent second annual conference, the American Biogas Council (ABC) awarded the first ever Biogas Projects of the Year.

The ABC Awards Committee recognized projects that have made a significant impact on the development of the biogas industry and excelled in four areas: innovation, technology, collaboration and managing complex systems. Because biogas projects can vary widely from sector to sector within the biogas industry, the committee awarded Biogas Project of the year in four categories: agricultural, municipal, merchant and institutional. There was a tie in the agricultural category, leading to five awards.

AgriReNew in Stockton, IA, won the Agricultural Biogas Project of the Year award for the execution of a quality agricultural-based project and sustainable business model that can be replicated at farms across the U.S. The biogas system was built in part to help the fifth-generation Sievers Family Farms expand their beef feedlot capacity to 2,400 head. In addition to producing additional revenue streams for the farm, the biogas project helps to manage the cattle manure, creating 1 MW of 24/7 electricity from the biogas plus a variety of solid and liquid products. Excess electricity is sold to the local utility.

Harvest Power’s Energy Garden in Lake Buena Vista, FL, won the Merchant Biogas Project of the Year award for its first-of-a-kind anaerobic digester that converts organic waste into renewable biogas and natural fertilizers, diverting hundreds of thousands of tons of waste from Central Florida landfills. When operating at full capacity, the facility will process 130,000 tons of organic materials annually and produce 5.4 megawatts of combined heat and power.

“This facility signals a paradigm shift for the region’s hospitality industry as theme parks, hotels and restaurants are now able to differentiate themselves to customers through environmentally sound waste recycling practices,” said Chris Peters, regional vice president of Harvest Power in Florida. “We’re excited to see organics recycling and clean energy take off in this region.”

Lawnhurst Energy, LLC in Stanley, NY, won the Agricultural Biogas Project of the Year award for their solution to handle a mix of wastes not typically found in New York farm-based digesters: dairy cattle manure, whey from nearby yogurt factory and feed residues. The biogas project designed and realized by ABC member EnviTec Biogas makes over 541kW of renewable electricity all day and all night and the digested materials are dried and used as bedding for the dairy cattle.

The Michigan State University South Campus Anaerobic Digester in East Lansing, MI, won the Institutional Biogas Project of the Year award for a great execution of a food waste biogas project on a college campus that also serves as a research platform for biogas research and development. The biogas system will generate approximately 3,000 MWh per year of renewable energy by processing organic waste from campus dining halls, food processing facilities and local agricultural operations. In addition to producing renewable energy for campus use, the facility will also divert nearly 10,000 tons per year of organic waste from landfills.

The Village of Ridgewood Biogas – Renewable Energy Project in Ridgewood, NJ, won Biogas Project of the Year for its unique characteristics as the only 100 percent privately financed biogas system at a municipality and also produce an amount of renewable energy from biogas and a small solar array that is equivalent to up to 100 percent of the power demand of the waste water facility.

“Many municipalities are struggling with aging infrastructure, underperforming utility facilities and severely constrained municipal budgets. This project demonstrates how partnerships with municipal and industrial leaders can achieve a lower carbon footprint while converting wastes to valuable resources for use in the local community. By repurposing an existing facility in this way, everyone benefits – the environment, the Village residents and our renewable energy investors,” said Chuck Gordon, CEO Natural Systems Utilities.

ABC member companies involved in this project include: Natural Systems Utilities and HDR.

More details, contact information for each project, and other featured projects can be found at: http://www.americanbiogascouncil.org/projects