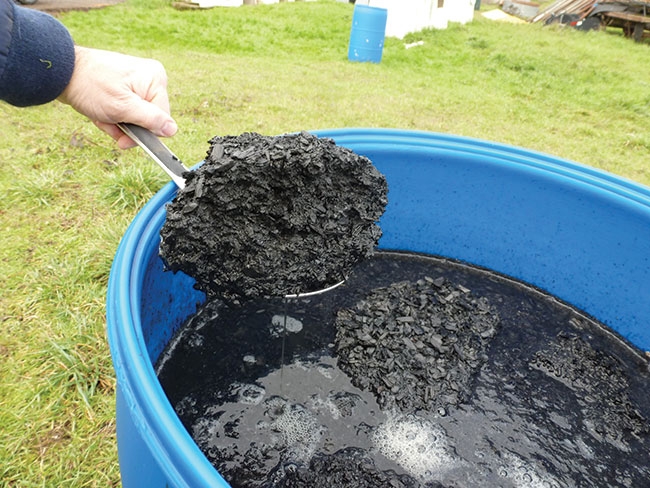 Biocovers to reduce the odors and environment-damaging gas emissions from liquid manure lagoons could be the next big thing and a promising new cover material is biochar. Contributed photo

There has been some success with using biocovers to reduce the odors and environment-damaging gas emissions from liquid manure lagoons – and a promising new cover material that has the potential to do even more is biochar.

“Biochars have unique physical and chemical properties that make them promising covers in terms of reducing odor and gas emissions, and also nutrient sorption, which other covers don’t address,” notes Brian Dougherty, who recently completed a bachelor’s degree at Oregon State University and is now pursuing a master’s degree at Iowa State University.

Biochar is a black material, explains Dougherty, produced when biomass is heated to high temperatures. The process results in volatilization and loss of organic compounds, leaving behind a carbon-rich material similar to charcoal. Biochars are resistant to decay in the environment and can persist for long periods of time, meaning that a portion of the carbon in biochars can be considered sequestered carbon if returned to the soil.

“In addition to sequestering carbon, biochars can improve soil productivity, particularly for degraded and lower-quality soils,” Dougherty adds. “Biochars also have unique chemical and physical properties, including a highly-porous structure at scales ranging from nanometers to millimeters, and large surface area. This makes them suitable for a range of environmental applications including possibly being used to cover liquid manure lagoons.”

Dougherty and colleagues tested the effectiveness of both floating biochar covers and straw covers at a lab scale. He applied the materials by hand to a thickness of five centimeters on buckets of liquid dairy manure to test nutrient adsorption, and a thickness of 10 centimeters on open barrels of manure to test odor-reduction capabilities. (He notes that large-scale experimentation would require applying the biochar to a lagoon with a blower or some other type of spreading equipment.)

Dougherty chose two locally-available (and therefore more economical) biochars, one made via gasification of Douglas fir chips and the other made from a pyrolyzed mixture of Douglas fir bark and center wood. The production of biochar through gasification and slow pyrolysis differ in that they result in different percentages of end product (slow pyrolysis produces more biochar whereas gasification produces more gases). The end product also possesses different characteristics. Slow pyrolysis biochars, for example, tend to be more hydrophobic (repel water) and to have less surface area, lower pH and lower ash content than biochars made via gasification, with all of these exact characteristics depending on feedstock, production process, time and temperature. Fast pyrolysis is also a method of biochar production, and again, it produces different percentages of biochar, gas, and liquids, with different characteristics.

Dougherty found that over the eight weeks of the experiment, the straw cover absorbed nutrients similarly to the biochar covers – approximately 18 percent of the N and 24 percent of the P from the manure in the buckets was absorbed.

“Using some extrapolations and various assumptions, I can speculate that we might see three to four percent uptake of N and P in a full-scale scenario, but this could vary tremendously depending on the biochar used, cover thickness, duration, manure nutrient content and other factors,” he notes. “However, as explained, the potential benefit of using biochar in comparison to straw or other cover materials is that biochar persists for long periods in the soil and therefore has the potential to hold those nutrients and release them more slowly than other materials.”

The pyrolyzed biochar came out ahead for potassium absorption, perhaps due to an initial lower potassium content. Similarly, the gasified biochar had a much higher initial potassium content, so that might have made additional uptake less likely. Indeed, Dougherty notes that the initial elemental composition of a biochar is an important consideration that was identified in his study.

Biocovers to reduce the odors and environment-damaging gas emissions from liquid manure lagoons could be the next big thing and a promising new cover material is biochar.

“It seems that biochars made from feedstock with a lower nutrient content might perform better for subsequent nutrient uptake,” he says. “A wood-based biochar, for example, will have a much lower elemental composition of nutrients on a mass basis compared to a manure-based biochar, and thus may be more suitable as a biocover material.”

Absorption is more complex, however, than just starting material composition. Other research has shown, notes Dougherty, that the surface of biochar is typically negatively charged due the presence of oxygenated ‘functional’ atomic groups. This can enhance sorption of positively charged ions such as ammonium but may inhibit sorption of negatively charged ions, including nitrate and phosphate. Dougherty explains that the surface chemistry of biochars can be very complicated and it therefore not easy to predict what will or won’t adhere to a particular biochar without knowing its exact surface chemistry characteristics.

In terms of cost, biochar is not among the cheapest lagoon cover materials. Dougherty estimates that a biochar cover would cost roughly anywhere from three to 10 times more than a straw cover depending on cover thickness and purchase costs. However, along with straw, other materials that have been used as biocovers – corn stover, corncobs, wood chips, sawdust and rice hulls – could potentially be blended with biochar, especially those that are lower cost and locally-available. How well the blends would perform, and what the optimal blend ratio would be, are matters for further research.

“Straw, for example might cost $75 to $125 per ton, depending on location,” Dougherty says. “The least expensive bulk biochar I have seen for sale is about $400 per ton, but other prices run much higher. Biochar is typically sold by the cubic yard and density can vary quite a bit, so direct comparisons to straw on a mass basis are difficult. Also, a biochar cover may not need to be applied to the same thickness as a straw cover to achieve the same odor and gas emissions reduction, so again, apples-to-apples comparisons are difficult to make.”

Dougherty thinks the idea of biochar lagoon covers really merits full-scale experimentation, as it has the potential to provide other benefits (carbon sequestration, improved soil health and so on) beyond what traditional biocover materials can provide. Biochar is particularly attractive, he says, if costs come down and biochar becomes more available as more companies produce it as a by-product of energy production. There is potential for generating electricity, fuels and other by-products with more sophisticated equipment, but biochar could be produced on-farm with available feedstocks and fairly low-tech equipment.

“The pyrolysis process generates energy that could be used to heat water and warm buildings during colder months,” Dougherty notes. “Many livestock operations struggle with excess nutrient loading and leaching from farm fields. It is a very serious issue and heavily regulated in several states. It may be possible to collect and sell the biochar as a high-value fertilizer product after using it as a biocover as a means for exporting excess nutrients off the farm.”