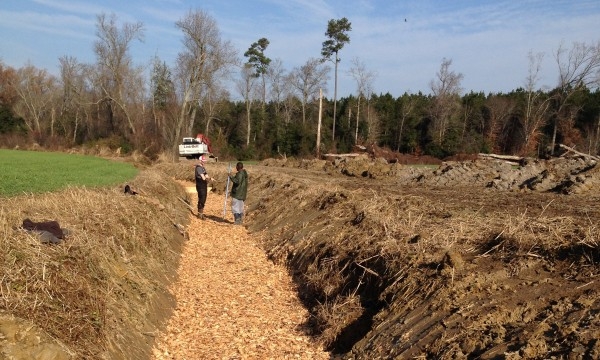 The research team observes the construction of one of the bioreactors in the Chesapeake Bay. The woodchips accelerate bacteria’s natural process of taking nitrogen out of the water. Laura Christianson

A ditch containing woodchips may look unassuming—but with a name like bioreactor it’s guaranteed to be up to more than you think.

Bioreactors, which are woodchip-filled ditches and trenches, are often used near crop fields to filter the water running off of them. The woodchips enhance a natural process called denitrification that prevents too much nitrogen from getting into other bodies of water like rivers and streams.

“This process is a natural part of the nitrogen cycle that is done by bacteria in soil all around the world,” explains Laura Christianson. Christianson is an assistant professor at the University of Illinois. “In a bioreactor, we give these natural bacteria extra food—the carbon in the woodchips—to do their job. These bacteria clean the nitrate from the water.”

Because it is the bacteria that do this water-cleaning process, it’s called a biological process, hence the name bioreactor. By giving them extra food (the woodchips have much more carbon than the surrounding soil), they are “super-powering” this natural process.

“Nitrate in ag drainage is often 100 percent pinned on fertilizer, but it’s actually much more complicated,” Christianson adds. “In short, nitrate in drainage comes from both fertilizer and manure applications and also importantly from natural nitrogen that exists in the soil.”

Christianson studies how well different types of bioreactors take nitrogen out of the water. Her team’s work has shown they are effective in the Midwest. Next, they wanted to test them in the Mid-Atlantic region, particularly the Chesapeake Bay watershed.

“Bioreactors are a farmer-friendly practice that has gotten a lot of interest in the Midwest, and so it made sense to see if bioreactors could also work for ag ditch drainage in the Mid-Atlantic,” she says. “Why did we need to retest them? The key scientific question had to do with the different environment. Differences in the landscape between the Midwest and Mid-Atlantic regions required further testing.”

The researchers tested three different kinds of bioreactors in the Chesapeake Bay area. They all treated water that was either headed to a drainage ditch or already flowing through a drainage ditch.

The group’s findings showed that all three types worked in reducing the amount of nitrogen headed from the field into nearby water.

This is good news for watersheds. Too much nitrogen throws off the balance of nitrogen in bodies of water and can set off a process that results in the death of the water’s plants and fish. For this current research, the goal was to limit the nitrogen getting from the Mid-Atlantic into the Chesapeake Bay.

The next step in this research, Christianson says, is to further test bioreactors in this area and others so they are better constructed and more effective.

“This is a relatively easy idea that cleans up water without taking much of farmers’ time or land,” she says. “We need practical solutions like this so farmers can continue to produce food and fiber, while also protecting natural resources. I like that it’s a natural process; we’re just enhancing it. There’s a nice simplicity to it.”

Learn more about this work in Agricultural & Environmental Letters. Christianson’s research is also highlighted at https://www.agronomy.org/about-agronomy/at-work/laura-christianson. The research was funded by the USDA Natural Resources Conservation Service Conservation Innovation Grant.