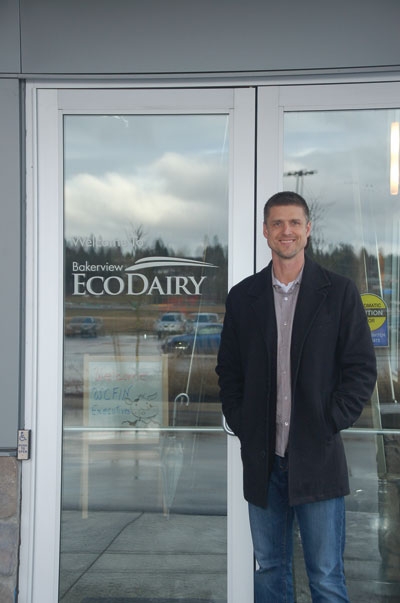 Bill Vanderkooi of Abbotsford, B.C., has taken an 80-acre parcel with 50 cows and made it into a “sustainable” operation, complete with a plug-flow anaerobic digester. Photo by David Schmidt

When you decide to build a retail food market next to a dairy barn, encourage the general public into that barn and dare to call yourself eco-friendly, you’d better be prepared to do something to eliminate the “warts” on the farm. In the dairy business, that means finding an eco-friendly and odor-free way to manage the manure.

That was the situation facing Bill Vanderkooi of Abbotsford, B.C. When Bill’s dad retired about two years ago, his four sons split up the family assets, which then included three dairy farms in B.C. and Saskatchewan, milking a total 850 cows, as well as a number of small agri-businesses. Each of his brothers took over one farm, Bill receiving an 80-acre parcel next to the original farm along with 50 cows and quota. He also kept most of the agri-businesses.

While some might think he was short-changed, Vanderkooi did not. A dairy nutritionist by training with a keen sense of animal welfare and behavior, he had some big ideas about how to make a silk purse out of a sow’s ear, or in his case, an agri-tourism destination offering “healthier” products out of a working dairy farm.

He was able to consider this option due to his location on a 1.2-mile (two-kilometer) highway linking Abbotsford and the 401 Freeway with a busy border crossing. Add Costco and other major retailers across the road and you get countless daily drive-bys of both locals and tourists – plus a steady source for complaints about manure and odor.

The digester
Key to the entire project is the plug-flow anaerobic digester, which allows Vanderkooi to bill his Bakerview EcoDairy as a “sustainable” operation. He calls the digester the “cornerstone” of green technology on the farm, saying it “allows (a farmer) to milk more cows on less acres which is necessary for sustainability.”

To date, most digesters have had a large footprint and a large appetite, making them viable only on dairies or feedlots with large herds. Smaller dairies would have to either grow corn or other feedstock specifically for the anaerobic digester or bring extra manure and/or other feedstock onto the farm.

Designed by Avatar Energy of Vermont, the Bakerview digester is a modular system intended to break-even on farms as small as 150- to 200-cow dairy. Although Avatar has been running a pilot plant in Vermont for several years, this was the company’s first installation on a commercial dairy. The company is now installing the system on several American dairies and expects to have another commercial system online this spring in Vermont.

Like most dairies, manure flows into a holding tank. Bakerview’s tank has only a three-day capacity instead of the six-months’ storage capacity a standard Environmental Farm Plan calls for. From the holding tank, the manure is preheated using heat from the digester, then pushed into the digester with a piston.

The actual digester consists of one or more fiberglass barrels. Each is eight feet in diameter and 20 to 40 feet long. The Bakerview system is 60 feet long (a 20-foot and a 40-foot barrel bolted together). Two 40-foot barrels will process the waste from 100 cows.

Sam Wampler of Avatar Energy says the barrels are made of fiberglass instead of stainless steel, as fiberglass is impervious to acids in the manure, which thereby gives them a lifespan of several decades. There are no moving parts within the barrels so breakdown is minimized. Instead, the system relies on the pressure from the piston to push manure through the barrel.

On its 21-day journey through the barrel, the manure heats up, releasing a biogas that creates a low-pressure (three to five psi) gas bubble at the top of the barrel and sterilizing the liquid/solid residue.

“We have a 99.97 percent kill rate for pathogens,” Wampler claims.

The biogas flows through a series of valves along the top of the barrel. It is used to run a generator, which provides power for the farm. In Bakerview’s case, the biogas fuels a 20-kilowatt generator that can provide about 12 to 15 kilowatts per hour, enough to power at least six houses.

Avatar expects most systems will generate enough power to run an entire farm. That is not the case at Bakerview, both because of the very small herd size and because of the higher electrical demand created by the presentation centre and on-farm market.

Once it exits the barrel, the digestate is processed through a separator to divide it into liquid and solid fractions. The now-sterilized solids can be reused as bedding, sold as compost or applied on the fields as a soil amendment.

The liquid effluent is sent through a trickle biofilter, which converts the ammonia into an odorless nitrate and isolates up to 70 percent of the phosphorus. Again, the liquid can be used on farm, or sold to plant growers as a nutrient-rich liquid fertilizer.

“This is a complete dairy manure management system,” Wampler says. “You get electricity to run the farm, bedding and a better fertilizer.”

For Vanderkooi, the system’s ability to remove phosphorus is one of its strengths, noting many Fraser Valley farmers have excess phosphorus in their fields and feed, potentially causing  eutrophication of nearby water sources and/or health problems in the herd.

Avatar gave Bakerview “a great deal” on the system.

Wampler notes the company expects to get great benefits from the Bakerview project and EcoDairy demonstration site. They are not alone. B.C. Hydro, the Environmental Farm Plan program and the B.C. Bioenergy Network also contributed to the project for the same reason.
It is already starting to see results.

“We have only been here a few days installing the system and we are already getting a steady stream of farmers to look,” Wampler says.

The eco-dairy
The Bakerview EcoDairy is the first demonstration dairy of its kind in Canada. The EcoDairy site includes the upscale Nutrifoods Market and the head office of the Nutriva Group, and Vanderkooi’s collection of agribusinesses, consisting of Bradner Milk Transport, Dairysmart Nutrition Group, Diverse Byproducts, Fraser Analytical Services and Nutrifood Solutions.

With each member paying $20,000 to $80,000 dollars to participate, Vanderkooi was able to raise more than $400,000 for the project. The barn features members’ products, including a DeLaval robotic milker, Comfort Zone stalls and SunNorth’s natural ventilation system. It is run by four full-time staff and augmented by local volunteers, with ongoing operations funded from tour fees.

“Agri-tourism is not a moneymaker,” Vanderkooi explains. “I just want to recoup my investment.”

The barn is covered in storyboards and attached to a presentation centre with a theatre and meeting space. In most other respects, the barn is simply a small version of the freestall barns on most dairy farms. It does, however, have several rare features, aimed at appealing to untrained guests, reducing labor and reinforcing the farm’s eco-friendly label.

The robotic milker has a viewing area on one side. A conveyor used to deliver bedding straddles the double row of comfort stalls. An angled blade pushes sawdust off the conveyor into the head end of the stalls. The bedding is then distributed further by the cows’ activities. The system ensures a steady supply of fresh, clean bedding with minimal labor input. There are stall dividers along the feed bunk to minimize fighting for feed and the feed lane is elevated so the cows’ feet do not touch the automatic alley scrapers, which are run more often than in a conventional barn. The alleys are also cantilevered so urine runs into a drainage channel in the centre, thereby keeping both the barn and the cattle in pristine condition.

Everything is monitored constantly – by anyone! Five cameras mounted in the barn and on the robotic milker are linked to the EcoDairy website (www.ecodairy.ca) so anyone can watch online at any time. The most common question visitors ask is whether cows have access to pasture. The answer is no, with staff carefully explaining the barn is designed to provide a safe, healthy environment for the cows. They stress the room provided for individual cow movement and the “perfect blend of nutrients” the diet provides.

In addition to the usual mix of grain, corn silage and hay, Vanderkooi’s total mix ration (TMR) includes whole flax seed and tuna oil. This results in higher CLA and Omega 3s in the milk, allowing him to market it as branded Vitala milk and yogurt.