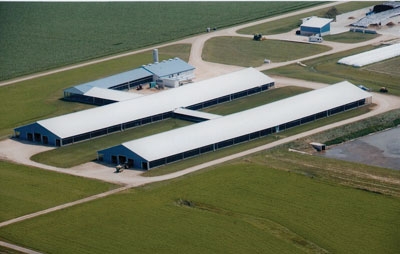 A seven-foot-deep, 420-foot-long channel delivers the barn manure by gravity at from the barns to the lagoon at the Blue Star Dairy barn in Arlington, Wis. The opening of the channel is visible as it reaches the lagoon. Contributed

Wet manure, sand bedding and freezing cold temperatures – these are three ingredients that don’t mix well. Without careful management, this combination quickly results in frozen manure in the barn or between the barn and the lagoon.

Dairy farms located in colder climates have had to develop various methods to keep the manure melted and flowing.

States like Wisconsin must contend with cold temperatures for at least four months a year. In the coldest months of December, January and February, it can get as cold as -25 Fahrenheit on occasion, but typically hovers in the -10 to +15 Fahrenheit range. A normal year also yields about 24 to 36 inches of snow.

Blue Star Dairy’s Arlington operation is located in the Madison, Wis., area. It is one of three dairy farms owned by Walter, Louie, Arthur, Craig and Brian Meinholz. The Arlington dairy consists of two head-to-head, four-row barns and 1,200 cows, which produce about 18 million gallons of manure annually. The dairy uses sand bedding for its cows in this operation.
At present, the dairy’s barn manure is handled entirely by gravity flow. The waste generated from the parlor and milking area, which includes the clean parlor and holding area flush water, collects in one lagoon. Water is neither added to the manure gathered nor collected from the free stall area. It collects in a separate lagoon.

Walter says the dairy farm has taken several steps to ensure that manure from the free stall area in particular maintains a “milkshake-like consistency” – no matter what the temperature is outside – to ensure consistent flow into the lagoon and to prevent the sand from settling out. First, they have installed barn insulation, which helps to maintain some heat during the coldest weather. Normally, the temperature in the barn stays above 26 Fahrenheit for part of the day. Manure freezes below that temperature. Second, the dairy uses a very fine sand for bedding, which helps to keep it in suspension both in the underground channel, which transports the manure to the lagoon, and in the lagoon itself.

Manure in the Arlington dairy is scraped using a tractor with a rear rubber blade. Below the barn floor, the dairy has a nine-foot-wide, seven-and-a-half foot deep, and 420-foot-long channel covered in concrete that slopes about one foot every 100 feet so the manure will gravity flow into the lagoon. Manure is deposited into the channel three times a day.

The goal at the dairy in terms of managing the manure in cold weather is to avoid letting it freeze in the channel. To accomplish this, the Meinholzes cover the channel opening with a piece of plywood with rubber on the edge like a trap door. A chain is attached to the plywood cover to lift it and put it back in place as needed. A gate keeps cows away from the opening.

“Since the channel is greater than seven feet deep, we seem to have some built-in warmth,” says Walter.

The dairy has embarked on a new sand separation project, which will allow it to recycle about 95 percent of its sand.

Recycling that sand will also result in less wear and tear on their pumps when the manure from the lagoon is land applied and less sand settling in manure haul tankers.

“We are setting it up as a closed-loop, flush/flume system so we are going to have mechanical sand separation,” says Walter. “Up (until) now, we have always used new sand. We’re set up with our gravity flow system and it was very practical on a smaller herd. As you grow bigger, most farmers go to sand separation. We had no moving parts until now when we’ll have all kinds of moving parts.”

Komro Sales, located in Durand, Wis., is providing the sand separation system. It consists of McClanahan augers, DariTech Inc. rotary drums to separate the manure solids from the sand, and Houle pumps. The system is equipped with a series of rotary drum screens so that a portion of the water used in the system is clean enough to reuse. The sand is separated out. Ultimately, the Blue Star Dairy system reunites the water and the solid manure streams in the storage lagoon.

“My understanding is that it takes very little heat to keep it above freezing,” says Walter. “You are only keeping the building at, like, 35 to 40 degrees. The experience of people that have them is that it’s not a big fuel draw. The big expense is the fact of having an insulated building.”

He adds that the pipeline transporting the manure from the barns to the sand separation building will also have to be deep enough to ensure that the contents won’t freeze.

So Fine Bovines is a dairy about an hour north of Madison, Wis. It manages a herd of 670 head and consists of three barns, each equipped with sand bedding and scraper systems to transport the solid manure that collects in grated gutters to reception pits, each with varying degrees of holding capacity. Wash water is pumped directly to the lagoon, which results in a manure slurry. The dairy has been using sand bedding since 1994.

The dairy operation has a four-row barn housing 220 cows, a six-row barn housing 140 cows, plus an additional 80 special-needs cows and a three-row barn housing another 150 late-lactation cows. The six-row barn is divided between two-year-old cows and special-needs cows. The manure generated in the special needs area is scraped to one end of the barn where a barn cleaner takes over to transport the manure across the building into a reception pit capable of six months’ worth of storage. The pit has that much storage capacity because there are fewer special-needs cows. All told, the herd generates about seven million gallons of manure annually. All the barn manure ends up in a six-million-gallon lagoon capable of about eight months’ worth of manure storage. A portion of the manure is land applied in fall over corn silage cropland, worked in, and replanted with wheat as a cover crop. A portion is also land applied in spring before planting season.

“Because the lines are six to seven feet below ground, the material in the pipes doesn’t freeze,” says So Fine Bovines co-owner Jeff Buchholz. He owns the dairy with Jim Kruger. Moving the sand through the pipe at any time of the year presents its own challenges. Therefore, So Fine Bovines has come up with an innovative approach to keep the pipeline clear.

“Once a day, we blow air through it to clean it out,” says Buchholz. “Sand has a tendency to want to settle out in pipes, so you need to be able to blow them out.”

So Fine Bovines fills a 1,000-gallon liquid propane tank with air using an air compressor and, through the use of a connector hose, the air in the tank is used to blow out the pipes.

“There are actually four risers in the pipeline where you can inject air to blow it through,” says Buchholz. “At 750 feet, that’s probably close to the maximum distance for conveying the manure and if we weren’t blowing air through the pipeline daily, it would probably plug up with sand.”

If the manure does freeze, the dairy’s contingency plan is to load the manure into a spreader with a Bobcat until the temperature is once again warm enough so that it will flow through the barn floor grate and into the channel leading into the reception pits.