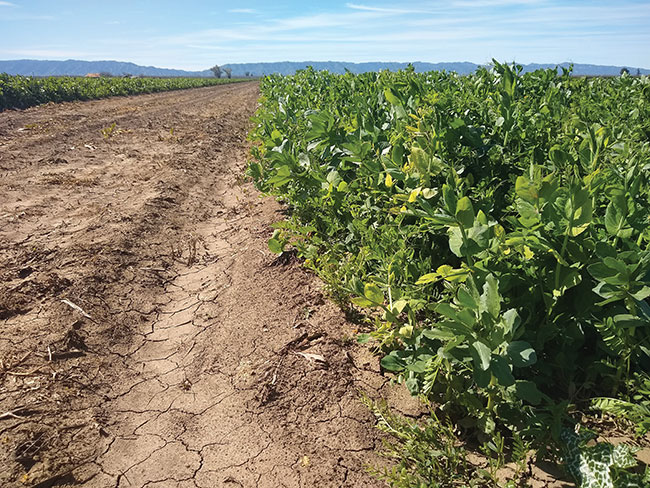 Composted manure and other organic amendments benefit cropping systems while increasing the opportunity for long-term soil carbon storage and climate change mitigation. Researchers at the University of California, Davis compared different cropping systems to understand the impacts of cover crops and compost on soil organic carbon (SOC) sequestration. The research was conducted as part of the Russell Ranch Century Experiment, a cropping systems trial initiated by the university in 1993, which examines the long-term sustainability of soil health-building practices in irrigated Mediterranean agro-ecosystems of northern California.

“The focus of this 19-year long-term cropping study project was on tilled row crop systems under the semi-arid Mediterranean region conditions of this area, which typically have wet winters and hot, dry summers,” explains Kate Scow, professor of soil science and microbial ecology and director of the Russell Ranch Sustainable Agriculture Facility. “We compared the use of composted poultry manure amendments, which are sometimes used in row-cropping systems in this region, the use of winter cover crops and the combination of composted manure and cover crops to determine the impact on SOC sequestration at different depths.”

Researchers compared SOC at five different soil depths, ranging from the zero to 30-centimeter (zero to 12-inch) surface layer down to a two-meter (6.56-foot) depth. Soil organic carbon was measured at the initiation of the experiment and at year 19 across all five depths. In many previous soil studies, the focus was only on the surface layer, where most of the nutrient, water and crop dynamics occur, particularly in row crop systems. However, this study was one of the first to include deep subsurface soil inventories to measure SOC.

“Some of the findings were quite surprising, particularly the differences in SOC levels in deep soil versus the top soil layer across different management systems,” Scow explains. “If we had only measured the top layer, we would have missed some of the most important conclusions and not seen the synergistic benefits of the combination of compost and cover crops. What was striking was how much opportunity we found for carbon sequestration deeper in the soil.”

For the surface soil layer, the study showed that over the 19 years the SOC in the top 12-inch (30-cm) layer in the conventional corn-tomato system didn’t change much; there were no real gains or losses in carbon. In contrast, the organic system showed quite a substantial gain in SOC in the top layer. SOC increases in the hybrid system were between the other two systems.

“The really interesting findings were what we observed throughout the entire two-meter profile in the corn-tomato system,” Scow says. “Again, the conventional SOC showed only a small loss, but the organic system with both compost and cover crops showed very large carbon storage throughout the two-meter depth, increasing SOC by 12.6 percent. If we had only accounted for the SOC in the surface layer, we would have underestimated soil C sequestration in this system by 57 percent.

“Another surprise when looking at the two-meter depth was that the hybrid system with the cover crop actually lost carbon – more than the conventional system. We aren’t really sure why,” she says. “It may be related to soil microbes not getting all the nutrients they need from cover crops, resulting in losses rather than gains of carbon. A new research project is underway to try to answer this question, looking at microbial activity and access to nutrients throughout the soil.” In the wheat systems, none of the management systems had much impact on C sequestration. 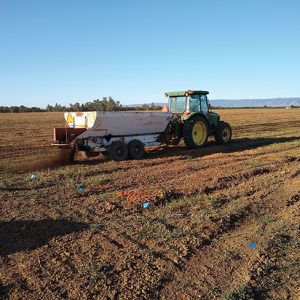 Scow adds, the results indicated there is substantial capacity to store carbon below the top layer, which is beneficial for several reasons. The lower soil depths are below the level of tillage and other human soil manipulation activities, so soil carbon is protected from disturbance. The soil properties are different at different depths, with higher mineral fractions deeper that are able to bind tightly to organic compounds, increasing the capacity for storage. Also, lower depths are subject to lower microbial activity, protecting the carbon from being broken down.

Though it can be challenging to measure carbon deeper in the soil, it is important to consider both surface and subsoil carbon dynamics to identify and promote practices that are both practical and have the greatest benefits at depth.

“A benefit of compost is that it provides not only carbon, but vital nutrients for soil microbes to function effectively in building soil organic matter,” Scow explains. “In soils that received compost inputs, there was movement of dissolved organic carbon down into the deeper soils. However, cover crops also seemed to play an important role by increasing infiltration and water movement deeper in the soil. The combination of dissolved carbon and roots creating channels helped move that carbon down to the place where it can be stored. These inputs feed both the plant and the soil, as well as the important microbes that help to build soil structure and aggregate stability, in turn improving infiltration rates and increasing soluble nutrient soil reservoirs.

“Additional benefits of organic amendments such as compost are that they build organic matter and help reduce leakage of nutrients, like nitrate, that might otherwise leach from the system,” she says. “Other benefits of compost is crop disease suppression in systems with higher microbial biomass and diversity. Feeding the soil and microbes along with the plants is very beneficial for agriculture.”

Other research at the Russell Ranch has evaluated opportunities and benefits of various organic amendments, including manure, composted manure, composted food waste, biodigestate and biochar. In a small two-year study, three nutrient treatments were compared in a corn-wheat rotation. The treatments included 100 percent synthetic N fertilizer, 100 percent dry dairy manure (scraped from yards including straw) and 50-50 N fertilizer/manure. The results showed equivalent crop yields from all three treatments, but with higher SOC levels in the manure treatments.

Looking to the future, Scow sees many opportunities to couple sustainable farm management practices with solving current disposal problems associated with food wastes and manure. “Our research approach has been focused on carbon and nutrient inputs at the farm-plot scale and how to optimize for different outcomes and cropping systems. To evaluate overall impacts on climate change, we need life cycle assessments to measure all potential environmental impacts, such as carbon footprints, and savings associated with every stage of compost production, from collection of feedstocks, to the composting process, to transport and then application to crops.

“There also needs to be development work to come up with formulations that work with existing equipment, time constraints and are practical in the field. And we need to ensure there are no contaminants associated with these composts that would be introduced into the food system. These valuable cropping system inputs improve long-term soil carbon storage and soil health, and contribute to climate change mitigation and adaptation potential of agricultural systems.

Related
SCCC asks you to soil your undies for National Soil Conservation Week
Work hard, worry less
Gift for the custom applicator who has everything
Composting or Stockpiling – What’s the difference?
Tags