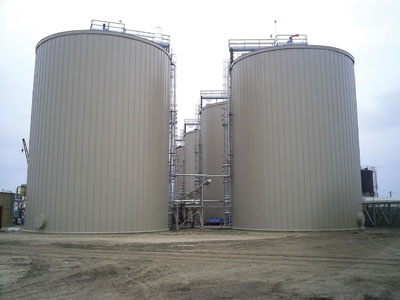 Located about 50 miles southwest of Fort Worth, the Huckabay Ridge facility is in the heart of the Texas dairy community, consisting of eight digester tanks, each with a capacity of 916,000 gallons capable of converting manure and organics into methane-rich biogas. Contributed photo

Dairy farmers in the Bosque River Watershed in Texas currently shipping their manure to the massive Huckabay Ridge anaerobic digester facility are breathing easier now that the facility has been purchased by EM Biogas, a subsidiary of Houston-based, Element Markets, from bankrupt Environmental Power Corporation (EPC).

EPC’s Huckabay Ridge facility went into receivership in July 2010. EM Biogas purchased the facility in November from EPC for $3.3 million. According to chief marketing officer Randy Lack, the company intends to convert the facility into a commercial as well as a technological success. The facility is the largest anaerobic digester in the U.S.

“It (Huckabay Ridge) is one of the beacons in the anaerobic digestion space, which is a space we believe in,” says Lack. “It has excellent anaerobic digesters and a nice setup.”

He adds that with the project in its current state, EM Biogas will be making significant capital investment into it, “just because there are some things that we think either need upgrading, improving, or revamping in some way. It certainly needs additional capital investment, but it is a good technology project.” A major focus of capital investment is to ensure that there is a steady stream of market-ready gas from the facility and that the volume increases over time, while simultaneously increasing the benefits of the facility to the nearby Stephenville area.

“I think the burden on us, from a technological perspective is to really optimize process, meaning manure feedstock management, conversion to methane, and really focusing on the anaerobic digestion process to increase methane and ensure that we are taking the right kinds of feedstocks,” says Lack. “So it is more chemistry than process engineering.”

Located about 50 miles southwest of Fort Worth, the Huckabay Ridge facility is right in the heart of the dairy community in Texas and consists of eight digester tanks, each with a capacity of 916,000 gallons capable of converting manure and organics into methane-rich biogas. The facility also serves as a gas treating plant, which upgrades the biogas to pipeline quality. It was originally built in 2006 and achieved full production in 2008. The digesters continued to operate through the bankruptcy and ownership transition. In the past, the facility also produced a nutrient-rich byproduct that was used as organic fertilizer in crop production.

Better manure management among the 51 dairy farms located in the Upper North Bosque River Watershed has been ongoing for nearly two decades and today is tightly controlled by a new waste permitting system run by the Texas Commission on Environmental Quality. The North Bosque River flows into Lake Waco, which serves as a water supply reservoir for more than 200,000 people in the city of Waco and surrounding area. The area witnessed significant growth from new dairy owners moving in from California and Arizona because of cheaper land prices, with the number of cows increasing by about 50,000 cows in the late 1980s to more than 80,000 cows today, an increase of almost 50 percent.

Lack says there is no doubt that the large anaerobic digester offers a significant benefit to local dairy farmers and to the community.

“The benefit of being able to take the manure into our project is valuable to the local dairy community, as it offers a viable alternative to land application or stacking the manure on their own land,” says Lack Besides processing manure from dairy farms within a 20-mile radius of the facility, the digestion process also accepts grease-trap wastes from Dallas-Fort Worth restaurants to supplement the gas production process. In the past, the facility was paid to receive and dispose of the waste material.

“All of the inputs to the facility are an important part of the economics but the largest portion currently of the projected revenues is associated with renewable natural gas sales,” says Lack.

Element Markets believes that EM Biogas will succeed where EPC faltered because of the Element Markets business strategy, which is not only to operate alternative energy assets, but to supplement the company’s income stream with profitable carbon credit offset trading and technology investments. To Element Markets, the combination of physical energy assets like Huckabay Ridge with the company’s deep trading and technology experience allows it to maximize profits. In other words, Element Markets is engaged in a number of renewables markets to establish a stronger business foundation. Purchase of the Huckabay Ridge facility makes EM Biogas one of the largest biomethane suppliers in North America. In addition to biogas, Element Markets has invested in wind and solar energy projects. It recently sold its wind assets to really focus on biogas production and marketing.

“There’s been a lot of technological successes within the anaerobic digestion world but, as far as the energy business is concerned, there has been a lack really of commercial success,” says Lack. “Given the experience that Element Markets has in understanding the energy business, plus our expertise in environmental commodities and operations, we felt like it was a project that fit us very well.”

One niche market the company is hoping to capitalize on is the premium the company says it can earn on its biogas versus fossil-fuel-based natural gas because of its green source. Lack says it is possible to earn a premium on this gas, but was reluctant to disclose how much that premium is, for business reasons. While the facility itself does not generate renewable energy credits (RECs) directly, because the facility does not generate electrical power, the RECs, a tradable and salable commodity, are generated for those who purchase the gas and produce green products like power from this renewable resource. So that is one marketing approach available to the company.

The company is currently conducting an inventory of the full value of the facility, including its benefit to the environment in terms of offseting greenhouse gases.

“We don’t have a good number on that yet, but what I can tell you is that it is significant,” says Lack. “If you look at the amount of waste that was put into a lagoon or into landfills that is now coming to our site, allowing us to prevent the degradation of methane released from those facilities, we believe it is a very significant reduction in greenhouse gases.”

He says there is no doubt that the “green” energy industry has grown exponentially over the past decade and is much larger than most people realize – probably 10 to 12 percent of the total energy produced in the U.S. – with proposals floated at the federal level for 20 percent renewables by 2020. For example, any driver traveling through Central or West Texas alone would be hard pressed not to see a wind farm. The driving force for growth in renewables, and why Lack feels confident about the future growth potential of the industry, is state and federal legislation requiring that a certain percentage of power be generated from renewable sources by specified target dates.

In terms of the Huckabay Ridge facility, because Element Markets was aware of the technology being employed, they felt that the project represented good value. They understood that even though they would be able to earn a premium on the biogas, prices would still be dictated largely by the current very low prices being paid for fossil-fuel-based natural gas. The whipsaw nature of prices for natural gas over the past five years is something that has caught everyone by surprise.

“The shock about the whole natural gas industry was simply the volatility,” says Lack. “I think most people were surprised at how far it went up and most people were surprised by how far it came down. Shale gas will provide a good source of natural gas for a long time to come but what it doesn’t provide is the environmental incentive that renewable gas does. A project like Huckabay Ridge has the benefit of providing natural gas, renewable power, and being greenhouse gas neutral or reducing greenhouse gases.” The key, he adds, is to market the biogas properly and, given the company’s knowledge of both the energy and the environmental commodity markets, he feels it will succeed.

Once EM Biogas has the Huckabay Ridge facility operating to its satisfaction, it has not ruled out replicating the technology elsewhere, but it is focused on optimizing that site, which is capable of holding seven million gallons of waste at a time. Lack emphasizes that Element Markets is always looking for growth opportunities and this is a green energy space that the company is very passionate about.