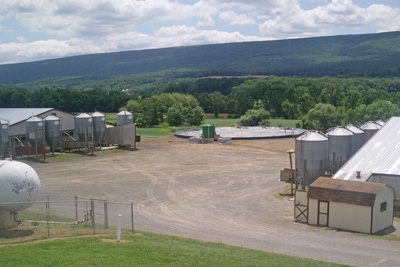 When Dennis Brubaker and his business partner, Gerald Stauffer, established Ideal Family Farms LLC, one of Pennsylvania’s largest hog producers, in 2007, they soon discovered that their manure management costs were a major drag on their bottom line and that their energy costs were making it difficult to bring home the bacon.

However, both of those scenarios have changed for the better since they invested in an anaerobic digestion system to process the seven million gallons of liquid hog manure the farm generates annually. Also, about 90 percent of the manure odor has disappeared.

Ideal Family Farms is located in Snyder County, about 50 miles north of Harrisburg, Pa., an area dominated by hog and dairy producers. It raises approximately 30,000 nursery and finishing hogs annually under contract for Country View Family Farms. The farm consists of three 3,300-head finishing barns and one 4,400-head nursery that were originally built in the mid-1990s.

In 2007, power and heating costs made up about a quarter of the farm’s expenses, with the challenges being both energy cost and price volatility. Furthermore, electricity costs were projected to increase by 30 percent in that part of Pennsylvania. So Ideal Family Farms began investigating various alternative energy options including solar, wind and biogas. They eventually invested in an anaerobic digester to process their hog manure, which generates biogas to produce power for their entire farm as well as heat for their nursery barn. They chose this option because it was the best fit for the farm operation and gave them direct control over both those expenses.

It also produced an income to help balance the cost of paying to custom apply their liquid hog manure. The farm sits on only 55 acres and depends on other local farms to dispose of its liquid byproduct, which is now more easily absorbed because the raw manure undergoes a nutrient transformation in the anaerobic digester. While disposing of the manure is not a problem, which is in demand among local farmers, it will still cost Ideal Family Farms $40,000 to $50,000 annually to contract the work.

“For us, the manure was nothing but a liability because we were paying to haul it away,” says Brubaker. “We started looking at how we could turn this liability into an asset and the first phase of that decision was to extract any benefit while it was on the farm.”

The digester began to produce biogas in July 2011 and since that time, has produced more than 500,000 kilowatts of power for use on the farm and for sale under contract to Pennsylvania Power and Light Company (PPLC).

“It has probably exceeded our expectations to this point,” says Brubaker of the anaerobic digestion system. “I’m very happy with the performance.”

Prior to the digester becoming operational, Ideal Family Farms was spending about $35,000 annually for power and about $27,000 for propane. Now, the farm has no power bill, and because the 180-kilowatt (kW) power generator produces about four times more power than the farm needs, that extra power is being sold to PPLC and distributed on the state power grid.

While the primary goal initially was to use the biogas generated through anaerobic digestion of the hog manure for power generation, as the project came together, Ideal Family Farms soon discovered that the anaerobic digestion system offered other savings and potential income streams. For example, heat recovered from the engine that burns the biogas through its liquid cooling system is used to boil water that provides heat to the farm’s nursery barn.

Because of that project, Brubaker says that they expect to cut their propane bill in half. The nursery barn is a major consumer of energy, as it needs to be heated almost year round.

He estimates that the digester could pay for itself in five years. That is based on all the grant money that has helped to build the project, savings in farm power costs, the income from power sales, reduced propane consumption as well as a few unconventional income sources. This includes income from tipping fees charged for accepting and processing food waste produced elsewhere in the digester as well as the sale of carbon and renewable energy credits.

So far, the farm has one food waste client and continues to work hard to expand its client base.

Before the digester was installed, the hog farm generated about 3,400 metric tonnes of greenhouse gases annually.

Processing hog manure through the digester has reduced those emissions considerably, and by metering the biogas produced, the farm is able to sell the carbon credits it is now generating through the California Air Resources Board.

This is generating between $12,000 and $15,000 annually for the farm under a four-year sales contract, as well as $7,000 annually in renewable energy credits sold to a utilities commission in North Carolina. The farm’s digester system provider and installer, RCM International, headquartered in Berkeley, Calif., helped Ideal Family Farms learn how to participate in these carbon credit and renewable energy trading markets.

“It actually requires quite a lot of monitoring on our part to do this,” says Brubaker. “We signed a contract with the broker and then we had to sit down and review the monitoring requirements laid out by the California Air Resources Board.”

This consists of keeping track of animal population monthly averages and monthly weight averages, testing the biogas quarterly to determine the proportion of methane and carbon dioxide in it, and monitoring gas flow production on a daily basis. However, given the amount of income it generates, Brubaker says, it is “very much worthwhile to take the time to do it.”

Once the anaerobic digestion system is paid off, the income generated will, at a minimum, go a long way to help pay for the annual costs associated with land applying what is now treated liquid waste from the anaerobic digester that still collects in the farm’s storage lagoon.

While 2007 wasn’t a great time to make a major investment in a hog farm, given the economic downturn that followed, the silver lining to that cloud was the $433,716 American Recovery and Restoration Act (ARRA) grant made available through the Pennsylvania Department of Environmental Protection’s Green Energy Works Program as well as the $248,000 United States Department of Agriculture REAP grant that went toward the total $1.092 million cost of the anaerobic digestion system. The farm financed the remaining amount over 15 years. RCM International also assisted Ideal Family Farms with grant applications.

The concrete digester tank itself holds 700,000 gallons and is 92 feet in diameter and 16 feet deep. It was purposely built slightly oversized to accept an additional 6,000 gallons per day of food waste in addition to the seven million gallons of liquid hog manure generated annually by the farm. While the tank was not oversized with farm expansion in mind, Brubaker says he knows of other operations such as dairy farms in the area that have oversized their digester tanks with plans for farm expansion.

Ideal Family Farms talked with other farmers who had invested in anaerobic digestion systems and conducted careful research of potential suppliers before choosing RCM International primarily for the simplicity of its system and how well it meshed with daily farm operations.

“We were able to set it up so that the tank, the utility building, the influent tank to feed the digester, everything just fit well with the layout of our farm,” says Brubaker. “We just tied into the influent tank from the existing manure drains coming from the barns and the whole application worked really well for us.”

The system is described as a complete mix digester. It has three internal mixers within the tank that constantly agitate the liquid hog manure in an oxygen-free environment to maximize potential biogas production. All manure generated by the hog farm is pumped four times a day to a centralized storage tank, which then automatically feeds the anaerobic digester at timed intervals four to six times a day. The temperature in the digester is maintained at 100 F by using some of the heat produced by the generator engine. The raw liquid manure stays in the tank for about 25 days before it is piped to the storage lagoon. As manure is pumped into the tank the same amount of treated manure exits the tank and gravity flows to the lagoon.

The construction project consisted of installing a raw liquid manure storage tank, installing pipes from the hog barns to the storage tank, the anaerobic digester, piping to transport the biogas from the digester tank to the utility building that houses an engine that drives the 180 kW power generator, and piping from the digester tank to the storage lagoon. Water is used to cool the engine and a portion of that heated water is piped to the nursery barn. It consists of seven rooms and seven circulator pumps that channel the heated water through heat exchangers that hang in each room.

The size of the farm operation is a major contributor to the economic viability of an anaerobic digester system, Brubaker says, and because most other hog operations in that area are about one-quarter the size of Ideal Family Farms, it is unlikely that a similar system would make sense for operations of that size. He hopes that will change.

“I would like to see more of it being done just simply from the benefits that our farm has seen from it,” says Brubaker, “and for continuing to do what it takes to advance the technology to where the application can be feasible for smaller farms.”