A new Canadian study compares nitrogen loss to the soil and air with spring and fall applications of digestate versus raw dairy manure. 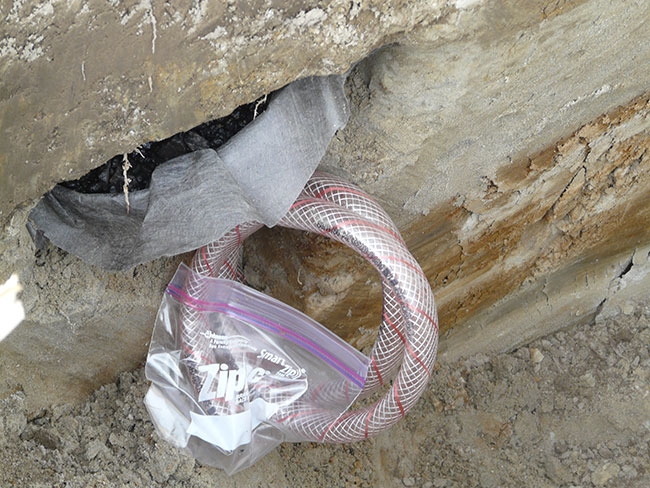 A zero tension lysimeter coil pokes out of the soil. These were used to measure nitrous oxide emissions. Photo by Emily Ann Schwager

Beef and dairy farmers obviously want to keep as much nitrogen as they can in the soil after they apply any type of manure to their fields, but there aren’t many recommendations out there about whether more N is retained through applying raw dairy manure or digestate (from anaerobic digesters).

In addition, is spring or fall application better for keeping N, and how does soil type figure in? It’s obvious that clay soils that allow for less general water drainage will allow also for less nitrogen leaching, but there haven’t been many studies comparing nitrous oxide emissions between different soil textures in the harsh year-round conditions of the northern U.S. and Canada.

Not only do farmers want to keep the N in the soil for their crops to use, but as good environment stewards, they also want to prevent nitrate leaching into watersheds and nitrous oxide emissions into the atmosphere.

“It’s well known that [nitrous oxide] is a greenhouse gas (GHG) that has a global warming potential almost 300 times more powerful than [carbon dioxide],” notes Emily Ann Schwager, who recently completed her master’s of environmental science degree at the University of Guelph under advisors Dr. Claudia Wagner-Riddle (University of Guelph Department of Environmental Science) and Dr. Andy VanderZaag (Agriculture and Agri-food Canada or AAFC, Ottawa). “In Canada, [nitrous oxide] emissions account for seven percent of the total annual GHG emissions, 72 percent of which are attributed to the agricultural activities. About 30 percent of Canadian dairy industry’s carbon footprint is from [nitrous oxide] emissions.”

Schwager notes that the Intergovernmental Panel on Climate Change (IPCC) considers better nutrient application practices and better manure management to be among the most important GHG mitigation strategies farmers can partake in.

Schwager (with her advisers and Anna Crolla, now at the Ontario Ministry of Agriculture, Food and Rural Affairs, Chris Kinsley now at the University of Ottawa, and Dr. Ed Gregorich at AAFC in Ottawa) applied and incorporated digestate and raw dairy manure into sandy-loam and clay soils in the Ottawa area, in both spring and fall for two and a half years ending in 2015. She measured leached nitrate through samples from a tile drainage system and nitrous oxide emissions through using zero-tension lysimeters.

Let’s start with the overall results. This study found that farmers who apply raw manure or those who have a digester and apply digestate are equally environmentally friendly. Nitrate leaching was consistently greater from digestate than raw manure, but nitrous oxide emissions were greater from raw manure over digestate.

“Overall environmental N losses between the two manure products were similar,” Schwager says. “There’s a theory that you get more nitrate leaching in digestate because it’s lower in organic matter compared to raw manure. It’s more of a liquid, which leads to faster soil infiltration (a positive effect for decreasing ammonia volatilization) and therefore possibly an increase the amount of nitrogen flowing downward to groundwater, if biochemical processes setting up N for gaseous emission don’t get involved along the way.”

“The key difference was that in the sandy-loam soil, digestate was associated with much higher (50 to 100 percent) emissions during winter and spring thaw compared to raw manure,” VanderZaag notes. “While we’re not exactly sure why, one important factor is that the sandy-loam soil was more acidic (pH 6.2) than the clay field (pH 7.1). Research by Cuhel et al. found that there is more nitrous oxide compared to nitrous oxide and nitrogen gas with decreasing pH because soil microbes convert nitrate to nitrous oxide more preferentially at lower pH.”

Another factor is differences between the freezing properties of the two soil types, which may have also contributed to greater winter and thaw emissions in the sandy loam soil.

In terms of nitrate leaching in different soil types, there was about twice as much from spring-applied raw manure on sandy loam soil compared to clay soil, but digestate showed similar leaching in both soils.

A zero tension lysimeter coil pokes out of the soil. These were used to measure nitrous oxide emissions.

“Both the lysimeter and tile drains results agreed that manure and digestate had lower nitrate leaching loss compared to spring-applied urea,” VanderZaag notes, “which may have been the result of lower N immobilization rates or lower soil denitrification activity due to the lack of applied carbon in urea compared to the organic amendments.”

Whether raw manure or digestate was applied in spring or fall, nitrous oxide emissions were the same. Other studies, however, have shown that fall applications potentially lead to significantly more nitrous oxide loss, considering it takes seven or eight months before the N is taken up by a crop.

“We don’t have a lot of year-round studies to compare to however,” Schwager adds, “so overall annual nitrous oxide emissions may be underestimated.”

Nitrate leaching was higher in fall applications, typically because of late fall precipitation and snow melt. Nitrogen applied in the late spring is often followed by less precipitation and the fields also dry out due to crop uptake of water over the summer and although the team doesn’t have definitive data on nitrate loss for fall-versus-spring, spring application was preferable for nitrous oxide leaching loss.

“A follow-up study was done with raw manure comparing fall versus spring and we saw that fall application on the sandy loam soil led to higher losses of N in the non-growing season,” says VanderZaag. “So overall, I think it is fair to say spring is recommended for digestate or raw manure application, although it is pushing the limit of what our data can verify.”

Canadian dairy farmers are generally thought to already apply most of their manure in the spring/summer (two-thirds). Manure is applied in the fall for various reasons, Schwager says, including lack of time and access to equipment at spring planting time and the risk of soil compaction following spring thaw, in addition to limitations on farm manure storage capacity.

“It’s positive that although application timing did not have an effect on direct nitrous oxide emissions, most dairy producers already apply manure products in the spring,” she explains. “The closer the N can be applied to the time of crop needs, the more N losses – from both environmental and economic perspective – can be avoided.”

And, although this study found that farmers who apply raw manure or those who have a digester and apply digestate to their fields are equally environmentally-friendly in terms of GHG emissions, because anaerobic digestion provides GHG reduction in other ways (as well as energy production), Schwager encourages their use. Only about 50 farms in Canada currently have digesters.