Is this method of applying manure, popular with livestock producers in Europe, catching on in North America? 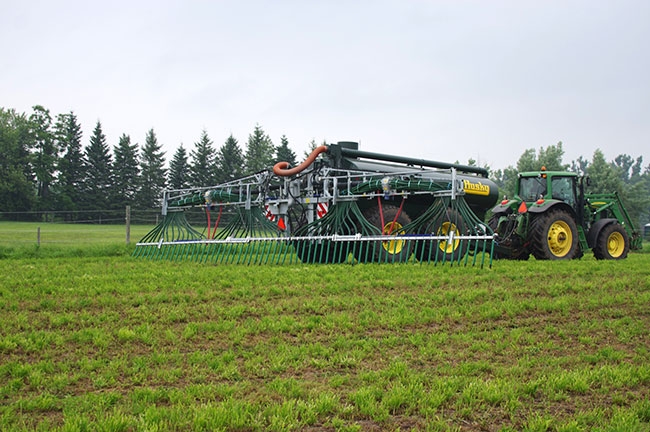 The dribble bar applicator is a method of distributing liquid manure using dragline units and is very popular in Europe. Courtesy of Husky Farm Equipment

In 2015, Manure Manager reported on the dribble bar, a method of applying liquid manure for dragline units that is very popular in Europe, with thousands of units sold there by its Germany-based manufacturer, Vogelsang, which has a U.S. office in Ravenna, Ohio.

The dribble bar was first demonstrated at the North American Manure Expo in 2012, and having heard about it, Walter Grose travelled to Germany to visit the factory. Grose – head of sales and marketing at Husky Farm Equipment in Alma, Ont. – was assured the units could work on Canadian tankers and signed on as a Canadian distributor.

The dribble bar was invented to address widespread European restrictions on manure application outside the growing season. Applying manure to a field with growing plants requires either injection or something that distributes manure at low pressure onto the ground below the plant leaves, allowing a greater amount to be applied with more accuracy and less runoff, crop injury and odor. The Vogelsang dribble bar – and other European equipment, such as Veenhuis shallow injection technology – also offers a large number of rows, which allows for application at ground level in seven to 10-inch spacings with no splash.

In 2015, Christine Brown, field crops program lead with the Ontario Ministry of Agriculture, Food and Rural Affairs, studied the dribble bar on a variety of fronts. She reported to Manure Manager that at a 10-inch row spacing, there are about 60 dribble hoses on the toolbar. At 4,000 gallons per acre, that would be about 70 to 75 gallons applied per row, per acre. Brown noted that less volume per row means less risk of runoff and, when applied on forage or pasture under appropriate conditions, faster infiltration.

In terms of nutrient application accuracy, Brown found that the fine distribution of the system allowed for more consistency in each row than splash plate technology. This makes the application of manure more like fertilizer, she concluded, but with nutrients placed closer to where a growing crop can utilize them. In comparison to injection, Brown noted that dribble bar application is faster and uses less horsepower, with farmers able to cover many acres in a day with less wheel track.

Brown also noted that a dribble bar could be used to apply manure in many situations, such as into a wheat crop at the same time that commercial nitrogen is applied or before planting in canola, corn or soybeans, in planted canola, corn (up to about the six-leaf stage) or soybeans, in edible beans before or just after planting, in forage crops after harvest (with potentially up to three application opportunities) and in pasture (especially where rotational grazing has been established). Lastly, Brown felt dribble bars would also work well after cereal harvest, where manure could be slurry-seeded with cover crops (or the cover crops could be established after application).

“Where large fields in corn/soy rotation have erosion concerns, grassed tram lines could be established for less compaction damage and more frequent in-crop application opportunities,” she said in 2015. “For custom applicators, technology that allows manure application to occur during the growing season will allow more days for application in a year and will help to reduce the stress associated with full manure storage when the weather doesn’t cooperate, such as late harvest or wet conditions or early winter conditions.”

Brown has not conducted any additional studies on the dribble bar specifically, but her recent studies on volatilization of surface-applied material shows faster infiltration results from a lower application rate per row (70 to 75 gal/ac), especially if there is some canopy, such as four- to-six-leaf corn.

For its part, Husky Farm Equipment toured across North America with the Vogelsang dribble bar mounted on the Husky Spreader in 2015 and 2016, attending the Manure Expo‎, field days and farm shows.

“Many people were impressed with the accuracy and the different types of manure you could pump,” says Grose. “We raised awareness and got farmers thinking about the new technology. We sold one unit for a dragline operation in Ontario. There may have been other units sold by other dealerships.”

Brown considers this slow adoption to be typical.

“The reality is that when producers are introduced to new technology, they often need to see or hear about it a few times,” she says. “Custom applicators may need to determine how many more days of application they may get by being able to apply into growing crops, and how it would work with their current compliment of labour and equipment.”

The dribble bar applicator is a method of distributing liquid manure using dragline units and is very popular in Europe.

Brown believes that as pressure for environmental sustainability in farming increases and the ag industry moves ahead with 4R stewardship (right source, right rate, right place and right time) for fertilizer and manure management, interest in dribble bards will increase, but that there are other devices that provide targeted manure application and some of it works in tandem.

“The other new technology that we are demonstrating as an opportunity for application into standing crops is the Cadman drag hose system that can apply manure into standing corn without damaging the corn,” she says. “The dribble bar could be attached to the drag hose to apply to other crops.”

Beyond the targeted nature of in-crop application with a toolbar, Brown sees benefits in the way compaction is reduced, especially if the setup features a very long boom.

“The Compaction Smart conference in January in Waterloo highlighted compaction damage to cropland and the lasting impact that compaction can have on yield,” she notes, pointing to a study presented at the conference conducted by Dr. Scott Shier of Ohio State University. Dr. Shier found almost half a field was wheel-tracked during manure application, and he also found that under normal soil conditions, a six-bushel corn yield hit was present in untracked areas. Under wet soil conditions, it was 27 bu/acre.

“If there is a 27 bu/acre yield reduction on 45 percent of the field, and corn is around $4.50/bu, that would represent a $50/acre cost due to compaction,” Brown notes. “If I have a 60-foot boom dribble bar and apply when risk of compaction is lower (soil conditions are not wet), then I would reduce the area of the field that is damaged with wheel tracks compared to a tanker that spreads about 30-foot width.”

Vogelsang’s international agriculture sales director notes that European sales are strong and are expected to continue to grow because regulations strongly support environmentally-friendly spreading technologies throughout the region. Ansgar Jansen says mash plates, for example, will be banned in Germany in 2020 and that band spreading (which includes spreading by dribble bar) will be mandatory.

“The European mentality has changed towards manure and farmers now view it as a very valuable resource,” he reports. “The dribble bar allows farmers to apply manure as they would commercial fertilizer, during a much larger time window than with other methods. You can do one application before seeding and the other two as side-dressing during growing season, when the nutrients to really use those nutrients.”

Jansen says it will take some time to educate North American farmers on the benefits of the technology, but that Vogelsang is mobilizing right now to start that up on a new scale.

Grose is also positive about adoption of the dribble bar.

“There are many farmers interested,” he says, “and we are positive it will catch on.”