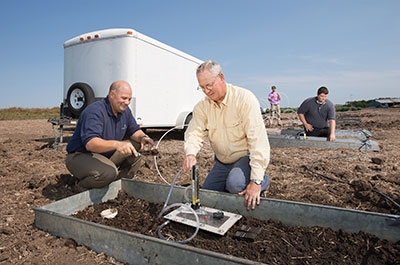 Manure disposal is a big concern for cattle feedlot operators,” says Agricultural Research Service agricultural engineer John Gilley. “Fortunately, producers can reduce their use of commercial fertilizer – and their production costs – by using manure to fertilize their fields.”

“Manure makes a great fertilizer because it has so many nutrients,” agrees ARS agricultural engineer Bryan Woodbury. “But more people are moving to rural areas and don’t like the odor, so we’re trying to find a way to help producers control odors more effectively.”

Wherever manure ends up, its decomposition releases volatile fatty acids, aromatics, sulfides, amides, and alcohols that are responsible for the odors. There has been some research on reducing odors when manure is used for fertilizer, but much of the work has been focused on applications of swine manure and poultry litter, which can be very different than beef manure applications.

Another factor that affects beef manure odor emissions is diet. Some producers supplement livestock feed with wet distillers grains with solubles (WDGS), a coproduct of corn ethanol production. Adding WDGS to cattle feed can increase the dietary levels of phosphorus, nitrogen, and sulfur, which in turn can raise emissions of ammonia and other odor-causing compounds.

However, WDGS feed supplements are a cost-effective way for livestock producers to lower their expenses, so producers are interested in finding approaches to managing manure odors that do not limit their use. One alternative is identifying how different beef manure application methods affect the emission of odor-causing compounds.

“Compounds that cause odor are really hard to identify, so we knew we had our work cut out for us,” Gilley says.

In their study, the team used manure collected from feedlot pens where cattle consumed diets containing 0, 10, or 30 percent WDGS. The scientists also evaluated two application methods – no-till surface manure application and disk tillage that incorporated manure into the soil – and collected air samples before and after water was added to the soil to assess the effect of moisture levels on emissions.

Beef cattle manure was applied at levels that provided 135 pounds of nitrogen per acre, which met the 1-year nitrogen requirement for corn. This meant that some plots received more manure than other plots, because varying levels of WDGS in the cattle feed resulted in different levels of nitrogen in the manure. This approach was selected so that study findings related to odor mitigation practices would have more real-world relevance for producers.

After collecting and analyzing the air samples, the researchers determined that two volatile fatty acids – isovaleric acid and butyric acid – and the aromatic compound 4-methylphenol were responsible for more than two-thirds of detectable beef manure odors. Most of these odors were released within 24 hours after manure was applied to the soil.

Incorporating the manure into the soil and irrigating afterwards reduced most of the odor compounds that were measured. But the manure needed to be incorporated almost immediately after it was applied to obtain the most effective odor mitigation.

The importance of tilling manure into soil was highlighted by emission measurements the researchers obtained for 4-methylphenol. The greatest emissions of this compound occurred from dry soils on no-till plots and were sometimes as much as 10 times more than similar emissions from tilled soils.

The researchers also noted some significant differences between emissions produced by volatile fatty acids and aromatics and emissions produced by sulfide compounds. These differences were especially notable in soils amended with manure produced by cattle that consumed feed with 30 percent WDGS. This type of manure emitted two sulfide compounds (dimethyl disulfide and dimethyl trisulfide) at significantly higher levels than other manures in the study – sometimes as much as eight times more.

“Our results basically confirm that producers who want to use beef manure to improve soil quality can incorporate it into the soil to reduce odors and maintain nutrients,” Woodbury says. “Now we’re working on ways to manage manure in the feedlot that will improve its characteristics as a soil amendment.”

“Knowing the principal components that influence odors in feedlots – pen location, moisture, and temperature – will help us with these investigations,” Gilley adds.

This research, which was published in the Journal of Environmental Quality in 2013, was conducted as part of the GRACEnet (Greenhouse-Gas Reduction through Agricultural Carbon Enhancement Network) program. GRACEnet is an effort to coordinate research projects at multiple ARS locations and determine the effects of management practices on soil carbon sequestration, trace gas emissions, and environmental quality.

Ann Perry is a member of the Agricultural Research Service Information Staff.