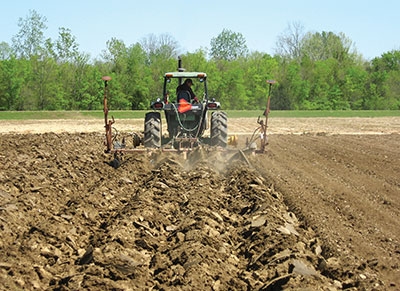 ARS research shows that spring is the optimal season for applying poultry litter to cornfields in the South and Southeast and can improve crop yields. USDA-ARS

Using poultry litter as fertilizer is a welcome trend in many southern states because that is where most of the U.S. broiler chickens are produced. The litter’s nitrogen content helps boost crop yields, and also helps reduce farmers’ expenses for commercial fertilizers. But a U.S. Department of Agriculture (USDA) agronomist has found that many farmers in Mississippi may be applying litter at the wrong time of year.

Farmers in Mississippi often apply poultry litter in the fall, months before planting cash crops in the spring, because it’s cheaper then and they have more time than in the spring. But Haile Tewolde, an Agricultural Research Service (ARS) agronomist at Mississippi State, Mississippi, has found that spring is the optimal season for applying litter in the South and Southeast.

Tewolde and his colleagues applied poultry litter in the spring and fall to test plots of corn planted each April for three years. They applied the litter at two rates – four tons per acre and eight tons per acre – and incorporated it into the soil by “disking,” a process that turns the soil and pulverizes it so that the litter blends in with the soil. For comparison, the researchers applied nitrogen fertilizer to other test plots in the spring and fall.

The results, published in 2013 in the Agronomy Journal, show that if growers stick with litter for more than a year, their yields will improve. Yields also will be enhanced if they apply that litter in the spring.