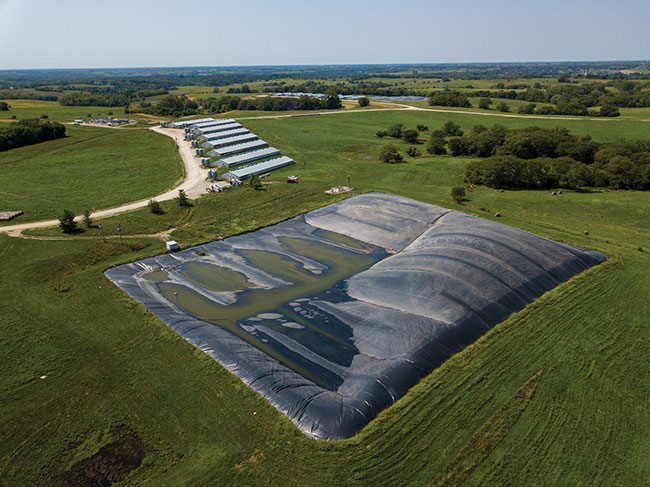 Six years ago, Roeslein Alternative Energy (RAE) teamed up with Smithfield Foods, the world’s largest pork producer, on a bold venture to generate green, clean, renewable natural gas (RNG) from hog waste. The goal was to build a RNG facility capable of harvesting biogas from Smithfield’s hog finishing farms in northern Missouri through the use of advanced anaerobic digestion technology developed by RAE, the St. Louis, MO-based renewable energy company.

Named the Valley View Project, the $100-million biogas initiative is now one of the largest of its kind, utilizing manure from one of the biggest concentrations of finishing hog facilities in the United States to create hundreds of millions of cubic feet of RNG annually for regional distribution.

This past October, the American Biogas Council acknowledged the important contributions and leadership of RAE and Smithfield Farms in the biogas arena by honouring the Valley View venture with one of its 2019 Project of the Year awards.

“The award acknowledges the innovation of our virtual pipeline as a gas delivery solution. It also highlights the coming-together of a large-scale livestock producer in Smithfield Foods and an energy production company in Roeslein to produce a renewable product from waste while delivering environmental, ecological and wildlife benefits,” says Chris Roach, president of RAE.

A project of this nature doesn’t come without challenge, and Roach says weather is at the top of the list. “Wind, rain, cold and snow all bring certain challenges. We lost a year of gas production on another farm due to a devastating tornado. We’ve worked through hog production issues due to viruses. Supply chain issues have been challenging. We’ve faced a lot of challenges, so this award is a real testament to the hard work and dedication of our team, and the vision and commitment of Rudi Roeslein and our partners at Smithfield,” Roach says.

“Rudi and his company have really been at the leading edge of not just applying anaerobic digestion to the hog farming industry, but doing so in a way that really provides economic and operational benefits to the farmers,” says Patrick Serfass, executive director of the American Biogas Council. “When we saw the Valley View project, it definitely showed us that they were taking their vision for better manure management for the hog industry to the next level. And we wanted to recognize that,” he says. “Our projects of the year are ones that we feel are not only exemplary projects in their own way, but they’re also ones that are worth replicating in other parts of the country. They set an example for others.”

Roach says a formal joint venture called Monarch Bio Energy was formed between RAE and Smithfield Foods in 2018. Operations, including gas collection and purification, take place on Smithfield’s farms, while RAE provides the technology to refine and transport the gas and also handles many business aspects of the partnership.

Roach describes RAE’s founder, Rudi Roeslein, as an entrepreneur and businessman who brought his extensive expertise in engineering and construction to the emerging RNG market.

“Rudi Roeslein learned a lot about anaerobic digestion through his travels in Europe, where this process has been used for years to produce energy. Smithfield had already demonstrated biogas could be captured and flared. Rudi had the vision for taking it a step further and creating renewable natural gas,” Roach says.

“In our operations, manure leaves swine barns and ends up in lagoons. A natural process of anaerobic digestion breaks the manure down, which historically would have emitted [the gas] into the atmosphere. We use thick, impermeable covers to capture the gas, then we draw it out from underneath the covers to an on-site gas purification skid. This process began at Valley View in 2014, which is now fully operational. We flare the undesirable gases, and what is left is pure renewable natural gas that we transport from Valley View to a natural gas grid injection point nearby using our innovative virtual pipeline.”

Roach adds RAE has plans to spread its anaerobic digestion technology. “All of our farms are going to be part of the bigger project,” he says. “Currently, in north Missouri, we have four fully operational farms producing gas, with two more under construction and three more to be completed by 2021.”