This is a first of its kind partnership between the dairy industry, a major utility and an anaerobic digester system company. 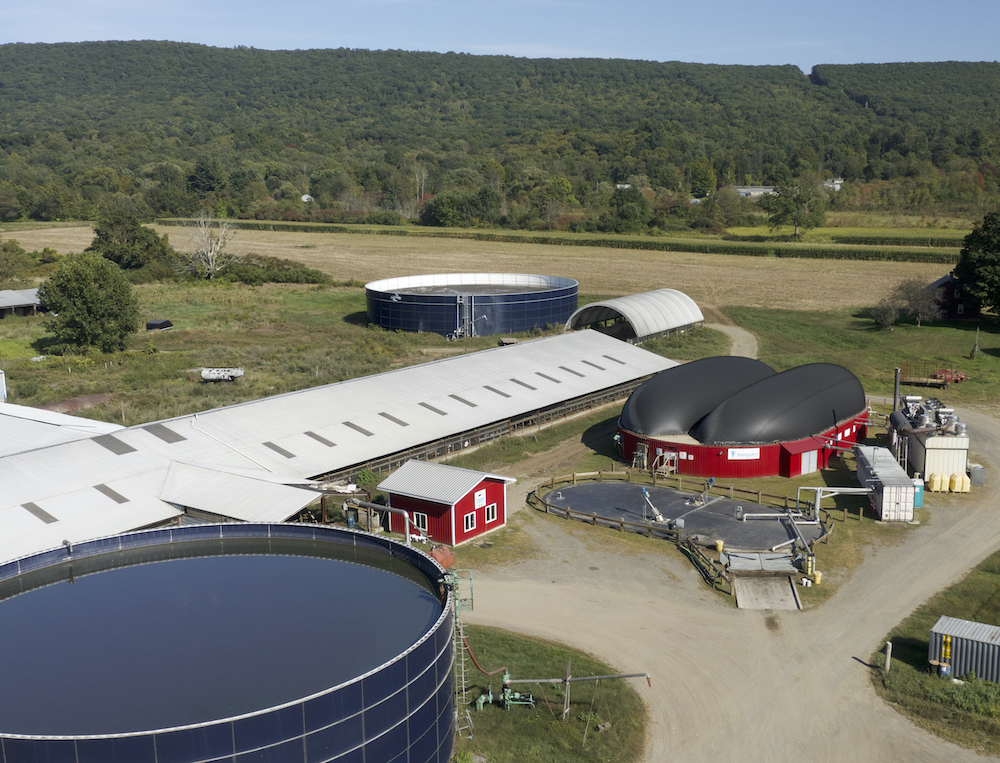 Dominion Energy and Vanguard Renewables Ag partnered in a more than $200-million nationwide partnership to convert methane from U.S. dairy farms into renewable natural gas (RNG) that can be used to heat homes, power businesses and fuel vehicles.

The news of the partnership allows dairy farmers across the United States to strongly consider the business case of adding anaerobic digesters to their operation.

Vanguard Renewables builds and operates farm-based anaerobic digestion projects, including a division for co-digestion (manure and food waste) projects and manure-only projects. The company has a multi-year alliance with the Dairy Farmers of America (DFA), the country’s largest dairy cooperative, to engage with DFA members about anaerobic digesters.

“We’re very excited about the investments from Dominion Energy that will allow us to explore and bring this technology to a wider range of farms . . . and bring a new business case to anaerobic digesters on farms,” said David Darr, chief strategy and sustainability officer of Dairy Farmers of America.

“We’re very excited about the investments from Dominion Energy that will allow us to explore and bring this technology to a wider range of farms . . . and bring a new business case to anaerobic digesters on farms.”

Vanguard Renewables Ag, the division of Vanguard Renewables that focuses on the manure-only to RNG business, will build and operate anaerobic digesters on partnered dairies. Dominion Energy will handle the offtake – renewable natural gas – and bring it into the market for more uses such heating homes.

Kevin Chase, chief executive officer of Vanguard Renewables Ag, says partnering with the utility company is an essential piece of the puzzle. “They’re the key component within our partnership, because if you produce this renewable natural gas from the manure and you have nowhere to sell it, then you don’t have a viable project.”

Part of a larger commitment to sustainability

Dominion Energy is one of the largest utility companies in the U.S., providing customers with electricity or natural gas. They have 7.5 million customers in 18 states.

Recently, the company joined with Smithfield Foods to form the largest agricultural-based renewable natural gas partnership in the U.S., to convert methane from U.S. hog farms into energy for local consumers. The recently announced partnership with Vanguard Renewables tackles the dairy side of the equation.

The companies say this is the same as taking nearly 100,000 cars off the road or planting 7.5 million new trees each year.

By capturing methane from U.S. dairy farms and converting it into RNG, Dominion Energy’s and Vanguard Renewables’ strategic partnership will reduce annual CO2 equivalent emissions by more than 450,000 metric tons. The companies say this is the same as taking nearly 100,000 cars off the road or planting 7.5 million new trees each year.

Boom or bust for anaerobic digesters?

Anaerobic digesters are large, sealed tanks void of oxygen that produce gas from organic waste such as livestock manure, leftover crops, or food waste. Over the past three years, David Darr has seen success and growing interest in anaerobic digester systems by DFA members.

Historically, anaerobic digesters have been financed and operated by the dairy farmers. The financial and management investment have been barriers to adoption and a reason why digesters have not been put in place on operations.

Darr says despite the interest, digesters “can be a little bit of a mixed bag” for some producers. He shares anecdotal evidence from dairymen who have digester projects that don’t last. For example, a dairy producer built a digester and signed an eight-year purchase agreement with a utility to sell electricity to the grid. But, when that contract wasn’t renewed, the return on investment for the digester was no longer there. Viewing digester projects as a volatile investment deters some dairy producers from considering it for their operations.

Despite this, technology for anaerobic digestion is improving and so is the business model as it switches from electricity to natural gas. “That’s where we think working with parties who have done this before, with technology that continues to improve, can allow dairy farmers to build on their environmental stewardship and provide renewable energy for communities,” Darr says.

So you want to build a digester?

The announced partnership brings a new business case for anaerobic digestion on the farm. So what does it look like?

A dairy farmer leases land on their property to an anaerobic digester company and in turn, works out an agreement to provide manure for the digester. The dairy farmer gets compensated for the manure used to feed the digester.

Vanguard Renewables, in all their projects, builds and operates the digester. The partnership with Dominion Energy means they have a built-in customer for the RNG that is produced from the system. “Vanguard takes on 100 percent of the cost and workload of putting the digester onto the operation,” Kevin Chase with Vanguard Renewables Ag explains.

All of the companies agreements are 20 year agreements. Chase says it has to be that long to be a win-win for both sides. “It brings stability to the dairy and allows [us] to make sure there’s an acceptable return on investment.”

Chase says dairy farmers benefit by adding a new source of revenue, adding operational efficiencies that come from having a digester, and contributing to being more sustainable and better stewards of their land.

“Dairy men have a hard enough job trying to make their dairies profitable in their industry . . . So for us, this is about providing some diversification financially for them and it’s not about giving them more work,” Chase says.

“Dairy men have a hard enough job trying to make their dairies profitable in their industry . . . So for us, this is about providing some diversification financially for them and it’s not about giving them more work,” Chase says.

In conclusion, as a dairy producer, all you’re responsible for is supplying the manure.

Vanguard Renewables currently operates five digester systems in Massachusetts. Each project ranges in time, operating anywhere from one to eight years. These five projects are part of the company’s co-digestion (manure and food waste) division. The projects run on dairies that range from 300 to 500 cows and the manure is supplemented with unwanted foods from nearby metropolitan areas. It takes about six to eight months to get a co-digestion project up and running.

It takes about six months to build the actual digester and it takes between 90 to 120 days to get the gas conditioning equipment permissions up to speed. In total, it’s “around 10 months to get your first molecules of renewable natural gas prepared to be sold into the pipeline,” Chase explains.

Manure-only projects are fit for large dairies that range from 3,500 to 4,000 cows or larger. “It has to be the bigger dairies,” Chase says. “Manure has been digested once right? You think about it, the majority of the energy content has been taken out. So for us to be able to get a reasonable amount of gas production, it really has to be on [large] dairies.”

For the Dominion Energy partnership, the company is looking to partner with large dairies across the United States on manure-only projects. While Vanguard has been asked about projects in Canada, it is not currently on the horizon but the company is “taking a look at it,” Chase says.

However, Vanguard Renewables licenses the anaerobic digester technology from a Canadian company, CH Four Biogas Inc., which is based in Ottawa, ON. CH Four Biogas has several plants across Canada, including in Ontario and British Columbia, as well across the United States, Mexico, Chile, and Argentina, in addition to licensing its digester technology to Vanguard and their U.S. operations.

As for digestion going through a boom phase only to bust later on, Chase adds that it’s important that dairymen ask the right questions before getting involved. Anaerobic digestion is attracting a lot of attention from many companies because of the “frothy market” in California with its low carbon credits.

“If the answer is no to any of those, or if they avoid the question, you should think twice,” Chase says.

For dairymen considering doing a digester deal with a third party, Chase says producers should talk to other dairies first and ask the company if they own and operate the system. “If the answer is no to any of those, or if they avoid the question, you should think twice,” Chase says.