After seeing success in Europe, mini digesters are entering the North American market with great potential.

Mini digesters are gaining in popularity, and with these features, more and more installations across North America are likely to happen in the near future. Common in Europe, a Belgium-based company called Bioelectric, has installed more than 220 mini digesters over seven years on small farms (50-500 milking cows) in Belgium, the Netherlands, France, Italy, Poland, Sweden and the United Kingdom. Working with Martin Energy Group, a U.S.-based engineering and consulting firm, an Ontario installation was completed in 2018, and a Pennsylvania farm received a mini digester in 2019. Talks are currently in progress with other farms in Pennsylvania and Vermont.

The differences between these mini-digesters and full-sized digesters are perhaps more stark than one might expect. “A full-sized digester is a construction project requiring a large amount of money, many months, an engineering team and a full impact assessment,” notes John Hawkes, project development manager at Martin Energy Group.

“A mini digester is not so much a project but a product, costing a fraction of a full-sized digester. It comes delivered with pre-assembled components that are put together over a few days on a concrete pad.” Mini digesters are sized at 10 to 50 kilowatts (kW) and are designed to be able to run on farm waste alone. No off-farm substrates means no pre-processing and truck deliveries, notes Hawkes, and simpler permitting.

“A mini digester is not so much a project but a product, costing a fraction of a full-sized digester.”

The mini digester at Harcolm Farms near Beachville, ON, owned by dairy farmers Rob and Rachel McKinlay, was finished in 2018. However, the idea for it came eight years prior.

At the time, there was a provincial funding program (feed-in tariff, or FIT) supporting the installation of small renewable energy generation on farms and residential properties. Most of projects were solar arrays and a few were wind turbines; there were no solid small digester options on the North American market at the time, Hawkes says. He and Rob McKinlay had been in touch about another topic and started discussing the possibility of how to make the idea of a small digester become reality.

They looked at what funding they could access in addition to the FIT program (which provides steady income once power is fed into the provincial grid), and accessed some funds from an Ontario agency called Bloom, which deployed provincial money to reduce carbon emissions. They also were able to receive a small amount through a federal agency called Bioenterprise Canada.

From there, it took a few years of research and trips to Europe before Hawkes and McKinlay decided their best bet was to import a mini digester kit from BioElectric. By March 2018, the mini digester components had arrived from Belgium.

McKinlay says it took eight people about four days to assemble it on a concrete pad near his dairy barn, then a few more days to fully hook it up. A 25-ton crane was needed to lift the stainless steel reactor panels, liner and roof.

There are two generators for this 20-kW mini digester. One 10-kW generator is dedicated to feeding power into the grid for profit under the Ontario MicroFIT program. Another 10kW generator makes electricity just for the farm. “After installation, we had to get the electrical system approved to national [CSA] standards and we needed to put in a bigger propane boiler to heat up the digester just in case it needed to be shut down for a while due to something like a pump failure,” Hawkes explains. “We also needed to make sure we met the national explosive gas standards. That involved a pressure test to test for leaks and we had to do a small modification to the flare.” 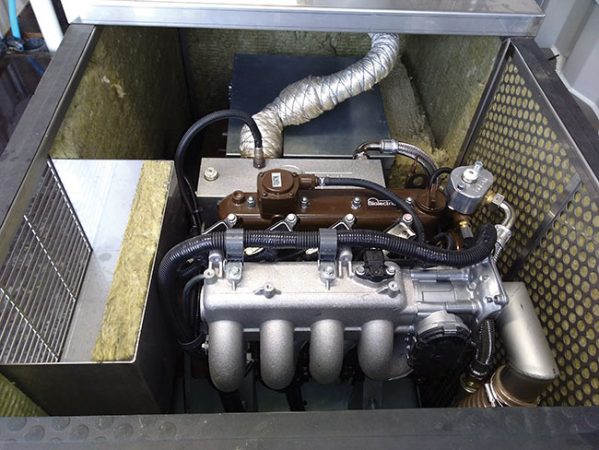 The mini digester houses two generators: one feeding power to the grid for profit under the Ontario MicroFIT program, and the other to make electricity for use on the farm. 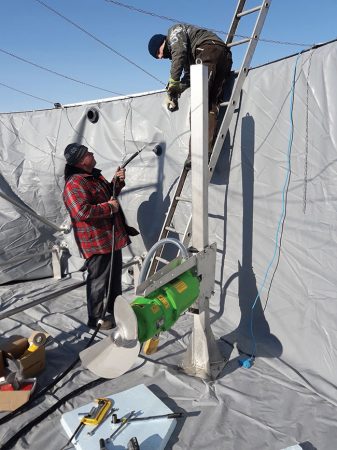 The construction of the mini digester on Harcolm Farms in Beachville, ON.


While these mini digesters are designed to use only manure, McKinlay uses 95 percent manure and adds about half a skid steer bucket a day of stale grain feed to his. However, he only has 65 milking cows right now, and he believes that the manure of 100 cows would be sufficient to produce 20kW. He and Rachel plan to increase their milking herd to 100 as milk quota becomes available.

The McKinlays plan to use the heat from the digester to warm up the barn and other farm buildings in the colder months of the year. Hawkes notes these small digesters actually produce more heat energy (from the generator engine) than they do electrical energy.

As with any digester, the digestate can be put through a screw press. McKinlay uses the solids as cow bedding and spreads the remaining liquid on his fields.


Hawkes says these digesters are designed to have their capital and operating costs paid off within eight to 10 years, with funding in place. McKinlay says that’s in line with his financial picture. “The operating cost is minimal,” Hawkes notes, “and we’ve reduced capital costs as much as possible. The plan going forward is to make more of the components and not import as many from Bioelectric.” In terms of currently available renewable energy/carbon emissions reduction funding programs in the USA and Canada, Hawkes notes that in Pennsylvania, there is the Alternative and Clean Energy Program (ACE) and in Vermont, a FIT program. There is also a US federal program called REAP.

At the beginning of the mini digester project, McKinlay says functional reliability was his top concern, but says now that aspect “has been no problem.” His best advice for those in North America who are looking at installing a mini digester like his is two-fold. “Book your Euros to fix the exchange rate,” he says, “and ensure the system is properly winterized in the event that the heat source [engine] goes down in the winter.”

The McKinlay mini digester has sparked lots of interest, with three packed open houses over the past year, and Hawkes expects the Pennsylvania project to attract the same kind of attention. He notes that while European countries have a variety of support programs in place to help fossil fuels replace biofuels and biogas, he expects “we will see more renewable energy farm subsidy programs like that in Pennsylvania.”

“There are some 10,000 farms with less than 200 milking cows just in the northeast area of the North American continent,” Hawkes notes. “Just five percent of that number gets us to 500 mini digesters. I think that’s a conservative estimate for the number that will be installed in this region over the next 10 years.”